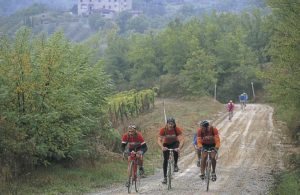 The Siena province has attracted tourism for years and specifically visitors with a growing interest in bike tourism as many chose to pedal through dirt roads to see and fully experience the scenery throughout the Val d’Orcia, the Crete Senesi and the southernmost Chianti region. The municipality of Siena along with 32 other municipalities and some sporting associations have teamed up to build on this trend with “Terre di Siena Slow,” a project aimed to maintain the bike paths, increase safety and encourage sports enthusiasts.

The local administrations are committed to conserving these paths year-round in addition to creating permanent, clearly marked trails for cycling enthusiasts. This work is also aimed to two major events that Siena hosts— the L’Eroica vintage bike race and the Gran Fondo Strade Bianche— both held on unpaved roads.  Hostel, bed-and-breakfast and hotel facilities along the way will be improved as well so bikers will be more encouraged to make stops and explore the area.

A new guide has also just come out titled “In the Footsteps of Sigerico,” on biking and hiking along the Via Francigena pilgrim trail which cuts through the province of Siena. The Via Francigena is the itinerary first taken by the Archbishop Sigerico of Canterbury in 990 on his journey to Rome. Look at the Terre di Siena web site for information on accommodations, restaurants and museums along the trails.

The “Terre di Siena Slow” initiative is organized by 33 towns and cities in Siena area in conjunction with local sports associations.

“Thanks to the commitment of the institutions, with this initiative it will be possible to create a new offering of interest to visitors in keeping with regional regulations,” said Luca Bonechi, president of the association. (kelsey lentz)