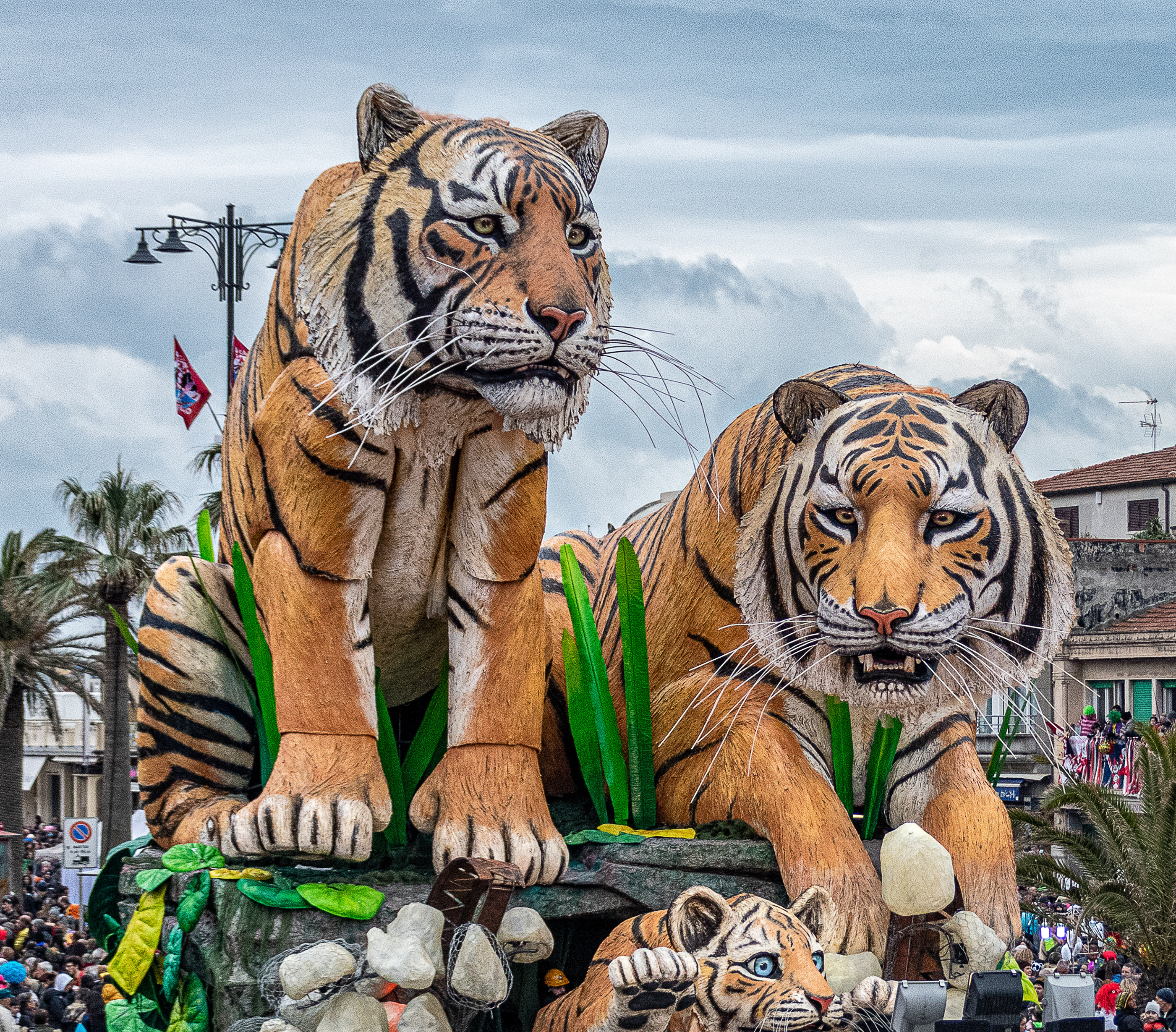 A float at the Viareggio Carnival

February and early March brings Carnival to Tuscany, culminating in Martedì Grasso, or Fat Tuesday.  The seaside city of Viareggio hosts Tuscany’s biggest Carnival celebrations, this year continuing a tradition begun in 1873.  Set on the Mediterranean Sea with a backdrop of the Apuan Alps, Viareggio boasts historical rulers from the Bonaparte and Bourbon royal families as well as onetime residents Giacomo Puccini, Percy Bysshe Shelly and Lord Byron.

Carnival, Carnevale in Italian, has origins in the pagan Roman festival of Saturnalia and the term, derived from the Latin carnem levare, means ‘take away the meat.’  The name indicates the feast of unrestrained enjoyment of food, drink and sensual pleasures leading up to Martedì Grasso which is followed by 40 days of Lent, a time when good Catholics fast or deprive themselves of something they enjoy.

The Viareggio Carnival has its own symbol, Burlamacco.  The smiling clown, dressed in red and white, a huge black cape billowing behind, has become the symbol of the city’s yearly event and the town’s official mascot.

This year, the celebrations, pared down due to the pandemic, consist mainly of six parades.  The usual neighborhood parties, celebrations and other events are not scheduled.  The parades feature huge papier-mâché floats, called carri, propelled down the wide beachfront avenue by huge trucks, accompanied by music, costumed dancers and rife with satire.  The objects of ridicule and denouncement, politicians, cultural icons and evils of contemporary society, are brazenly portrayed in caricature on the floats.  Teams work throughout the year on creating the floats in great secrecy, building them in huge warehouses the size of airplane hangers.

The tradition of using current events and world situations to inspire the floats, continues in 2022.  A common theme with the floats, hope for a healthier, more understanding and normalizing future, is reflected on many of them.   One float entitled “The Dreamer” showcases Don Quixote, a dreamer who never gave up.  With his image in the center, the windmills in the background represent the seemingly omnipresent pandemic, but after a fall, we continue to get up and look forward.  “I Have a Dream,” with a portrait of Martin Luther King Jr., also includes effigies of Mother Teresa, Nelson Mandela and Mahatma Ghandi, suggesting the world can change through non-violence.  Discrimination and cruelty continue to plague mankind but hope for a new awareness inspired by these visionaries, can lead to an improved and more tolerant future.

The float entitled “Manipulation” warns against the danger of social media, TV and modern technologies and how they influence the masses.  The solution to avoid manipulation, as portrayed, is to look at the world through our eyes, heart and free thought.  “Buffalo Biden” features the US President astride a bison and his inauguration pledge, “I’m here to make things right.”  With the COVID crisis, immigration problems and Afghanistan, Biden has faced an uphill battle to keep his promise, but despite the previous president’s attempts to unseat Buffalo Biden, he promises not to forsake leadership of the ‘Land of Freedom.’

Also among this year’s floats is one depicting popular singer Vasco Rossi with a play on his famous song, “Vorrei una vita spericolata” (I would like a reckless life) turned into “Vorrei una vita decovizzata” (I would like a life without COVID); “Homogeneity” on equal rights for women and men throughout the world; “Reset,” which depicts a polar bear afloat on a small piece of iceberg holding a mechanism that that world leaders should “reset” to turn back the effects of climate change; “E’ quindi uscimmo a rivedere le stelle,” (And therefore, we will go out again to see the stars), quoting the last line of Inferno (Hell) in Dante’s Divine Comedy in the hope, after many trials and tribulations due to COVID, people will be able to go out again, embrace each other, return on a path of self-discovery and see the stars; and “La festa dei folli,” (The celebration of craziness) which portrays Italian singer Achille Lauro as a pope of chameleons, changing color and identity at every turn.

Focusing on climate change and the future, “The Future? A Hypothesis” portrays the arms race, toxic waste and unbridled consumerism asks what kind of a world we want to give to our children.  With an innocent child in the foreground, three sinister figures loom behind him.  (rita kungel)