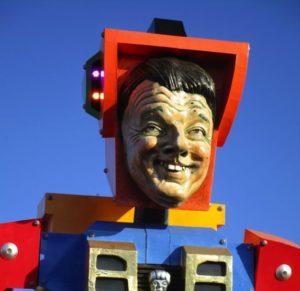 The summer parade route starts in Piazza Puccini and follows the Lungomare to Piazza Maria Luisa.  The summer rerun of the winter Carnival will feature a Food Village selling panini and other typical Tuscan dishes as well as market stalls with Carnival balloon and confetti for sale in addition to other products

People will be dressed up in varying degrees, from a simple mask and feather boa to an elaborate jester costume to an entire group dressed as the green army men from Toy Story.
The hand-powered floats are classified according to size—the first being super-massive and the second, massive—which in the past have towered as tall as 25m (82 ft.).  Following the floats are masked groups and people moving and dancing in routines that communicate their satirical messages.

Among this year’s first category floats is “Reformers,” a comical combination of the reform-optimistic Prime Minister Matteo Renzi and the fictional robot Optimus Prime of the Transformers franchise.  The environmentally themed “White Gold,” an enormous purple elephant symbolic of the struggle against ivory poaching, is also contending for the grand prize at the 2015 Viareggio Carnival.

“Don’t Fossilize Us,” a skeletal T-Rex float which at first appears to be environmentally themed, challenges viewers to continue to support the political reformation of Italy.  The artist believes if Italy cannot rid itself of the burden of corruption, it will surely die, decay and become a fossil.

“Italian Pavilion,” a masked group parodying the food theme of Milan Expo 2015, will bring to life Prime Minister Renzi and Pope Francesco as chefs trying to reorganize Italy. This creative group will demonstrate the struggle the Pope and Prime Minister face as they strive to clean the dirty kitchens they’ve adopted, the Catholic Church and the Republic of Italy.