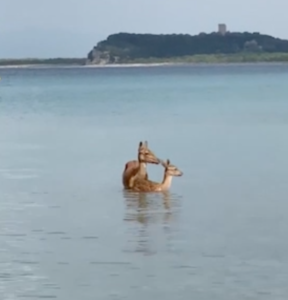 How to combat the heat wave that has Tuscany in its grip until the end of August?  With temperatures well into the 90°s (F) or 30° (C), take a cue from these two deer photographed taking a swim off the Cala di Forno beach in the Maremma area of southern Tuscany.  Mother doe and her baby immersed themselves in the cool water; then, approaching the shoreline, the fawn began to leap and have fun playing  water games.  See video.

Here are some useful suggestions to beat the heat for those at home and not on vacation like the deer.  First of all, avoid going out of the house between 11 am and 5 pm if possible; close the shutters or lower the awnings to create shade indoors while allowing air to circulate; drink plenty of water and eat fresh veggies and fruit instead of pasta; avoid drinking too much coffee or alcoholic beverages; avoid physical exercise outdoors; wear clothing made of cotton or linen in addition to sunglasses and a hat; never leave children or animals in a parked car, even if just for a few minutes; bathe babies in lukewarm water; be available to help elderly neighbors in case of need and remember to call a social worker if necessary; don’t forget to replenish water for pets daily.  The use of air conditioners, which also lowers humidity, is more effective than fans.