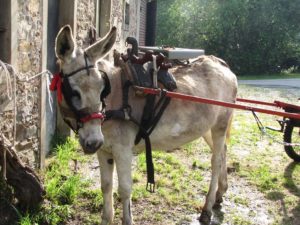 Set with a backdrop of a beautiful medieval village, the Palio dei Somari (Donkey Race) celebrates the Feast of St. Joseph on March 19. Torrita di Siena, a city with a proud tradition of woodworking and one attracting many immigrants from other parts of Italy, decided in 1966 to inaugurate a festival providing a sense of community for its citizens. Town leaders wanted to highlight hard work and the simplicity of human labor, choosing the humble donkey as the protagonist in the festival honoring St. Joseph, the patron saint of carpenters.

On race day the event begins with a parade of costumed flag throwers, knights, archers, priests, lords and ladies marching to the sounds of drummers and trumpets.   The donkeys, chosen by lottery, are brought in for the crowd to view as their anxious riders garbed in Middle Ages costumes bearing the flag and logo of their neighborhood get last minute advice from their consiglieri.

But the Palio dei Somari presents quite a different experience, as donkeys, known for their stubborn and independent disposition, don’t behave like horses. The donkeys turn back in the opposite direction, buck off their hapless riders or simply refuse to run. During the often-comical event, the crowd roars with laughter and shouts in frustration, frequently giving advice to the young jockeys.

As the field of eight neighborhoods is narrowed down to two, the excitement mounts and defeated riders have been seen to cry at their demise. In the end the winning neighborhood is feted with a banquet and party to which the entire town is invited and lasting until late in the evening.

During the week leading up to the palio, townspeople organize concerts, shows, crafts markets and dinners featuring typical dishes of the region.

For further information and schedule of events see website: www.paliodeisomari.it.