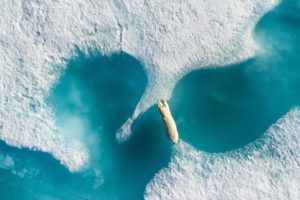 “Above the Polar Bear” by Florian Ledoux

Through December 2, Siena is hosting “The Sky’s the Limit,” an aerial photography show held the Duccio di Buoninsegna High School at the Complex of the Basilica of San Domenico through December 2. The contest is the first of its kind to be held in Italy and will present a selection of 37 of the most beautiful images from the first edition of the 2018 Drone Awards photo contest.

The display is part of the fourth edition of the Siena International Photo Awards (SIPA), a worldwide competition with some of the highest international participation of any photo contest in existence. The showcase of images from all over the planet will push past the canons of traditional photography, providing viewers with a fresh perspective of the raw beauty of the world as seen from the skies. Featured photographers capture today’s global environment from its most remote, untouched corners to its megacities bursting with life and activity.

Over 48,000 images from amateur and professional photographers in 156 countries were submitted to the contest; 4,400 entries from 101 countries arrived in Siena to be screened by a jury for “The Sky’s the Limit” exhibition. The submissions by the finalists were divided into six sections: abstract, nature, people, sport, wild nature, and urban landscape.

The recipient of this year’s Photographer of the Year award is French artist Florian Ledoux. His photo, “Above the Polar Bear,” captures a polar bear leaping over turquoise seawater between ice banks in Nunavut, northern Canada.

The winner of the award for the abstract category is “Weather Snake” by Romanian photographer Ovi D. Pop. In this shot, tiny cars meander down a winding road far below the drone. A vertical divide separates the landscape in two halves; one is consumed by a lush forest of emerald trees and foliage, while a layer of snow and ice blankets the other.

The prize for the sport category went to Dutch photographer Vincent Riemersma for his image of ice skaters racing in colorful uniforms, their shadows stretching across the smooth, white ice. Italian photographer Francesco Cattuto won an award in the urban landscape category for his breathtaking photo of the Basilica of St. Francis of Assisi shrouded in clouds and bathed in the warm glow of the rising sun.

Sky’s the Limit is open Friday from 3 – 7 pm and Saturday, Sunday, and holidays from 10 am – 7 pm. Admission for adults is €7. Children under 14.  enter for free if accompanied by a parent.  The ticket includes access to all of the exhibitions of the SIPA.

To see a photo gallery of the some of the winning submissions, visit Florence’s La Repubblica news site.  (leigh van ryn)