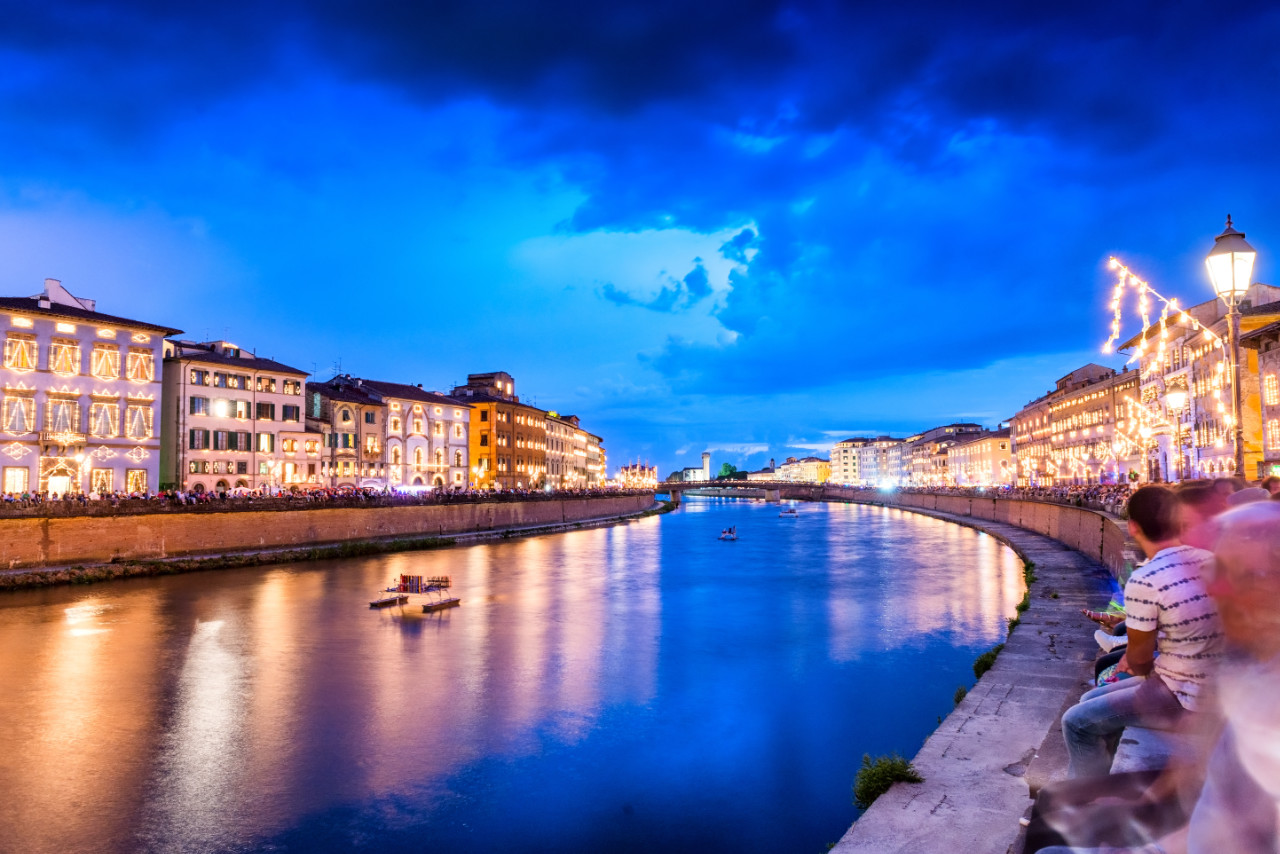 The Lungarni of Pisa lit up for the Luminara

After two years of suspension due to the pandemic, the celebration of the patron saint of Pisa, San Ranieri, returns this year. Locals and tourists alike look forward to seeing the city glow with the light of thousands of wax candles on June 16, followed by the centuries-old tradition of the regatta on June 17.

San Ranieri lived during the twelfth century but was not made the patron saint of Pisa until 1632. Originally born to a wealthy Pisan family, at the age of 19 Ranieri abandoned this lifestyle and his inheritance to live in complete poverty. He went to the Holy Land, modern day territory disputed between Israel and Palestine, where he practiced penitence and, according to tales from that era, performed miracles. Legend has it that when Ranieri died the bells of Pisa rang out, all together, though no one had touched them.

The “Luminara,” a tradition dating back to 1688, marks the beginning of the festivities celebrating San Ranieri. In the days leading up to the event, locals all around the city work to install white wooden frames (bancherie) onto the buildings along the Arno River. On the evening of June 16, approximately 100,000 candles in glass cases (lumini) will be placed in the frames, highlighting the outlines of windows, doors, and terraces with a beautiful flickering glow. Two other famous areas of the city are also lit up with oil lamps: The Square of Miracles (Piazza dei miracoli) and the Leaning Tower of Pisa.

The evening balances traditional and modern practices, creating an event that celebrates equally the historical and contemporary versions of Pisa. The late-night fireworks show, which usually starts around 11:30 pm, is a fairly recent addition to the “Luminara” festivities. Fireworks take advantage of modern technology to further illuminate the night. In recent years there are also food stands set up all along the Arno, where you can eat surrounded by the beautiful view of the lights reflecting off the river.

The following day starting at 6:30 pm is the Regatta (Palio) of San Ranieri. Boats representing the four historic city quarters ­– San Francesco (yellow), San Martino (red), Santa Maria (light blue) and Sant’Antonio (green) – race against the current along a 1500-meter stretch of the Arno. This event celebrates Pisa’s history as one of the four most prominent Italian maritime republics starting in the Middle Ages, alongside Genoa, Amalfi, and Venice. Each boat crew consists of eight rowers, a helmsman and a “montatore” who has to climb a flagpole that is more than 30 feet tall and retrieve the flag to achieve victory.

Pisa’s contemporary art center, Palazzo Blu (Lungarno Gambacorti 9), will have extended hours both on June 16 (10 am – midnight) and on June 17 (10 am – 8 pm), so visitors can view the current exhibitions “Oceans, the Last Frontier,” and “Connections, Tales of Hope.”

Looking ahead to June 25, the final event celebrating San Ranieri is the Battle of the Bridge (Gioco del Ponte), a tug-of-war like competition in which the city is divided into two teams based on neighborhood. Each team battles for possession of the Ponte di Mezzo by aiming to push a large iron cart onto the enemy team’s half of the bridge. This game is beloved by locals, who in some cases spend months preparing to represent their team well.  (ann webb)