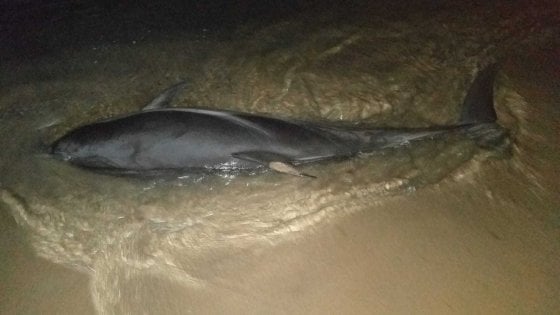 Flipper has made friends with yet another human. After a dolphin got stranded on the shore of Giannella, a policeman from Orbetello returned the beached animal to the water after forty minutes of struggling.

On Friday evening, a woman called the local police to say she had seen a dolphin stuck on the beach that she didn’t think could return to the water. Three policemen soon arrived at the scene and found the half-submerged, half-beached mammal.

The dolphin was thankfully still alive. One officer, Carmelo Cocuzza, immediately rolled up his pants and started half-carrying, half-dragging the sea mammal completely back into the water while his fellow officers shone lights to illuminate the beach. He would frequently stop to douse the dolphin in water to keep it breathing. The whole time, the terrified dolphin was struggling against him, wiggling and accidentally heading back towards the shore.

Here’s where the event gets heartwarming. Cocuzza began to massage the animal as he waded out with the dolphin in arms, talking with it even without a response. Somehow, the dolphin knew what he was saying. It stopped struggling and allowed him to return it to the water. To Cocuzza, as it swam back out to its home, it seemed as if the dolphin stopped at one point and looked back, thanking him for the help.

The whole event took only forty minutes, less than an hour. The dolphin has not been seen since but Cocuzza returned the next morning just to make sure that he or she hadn’t made the same mistake overnight. Luckily, it hadn’t.