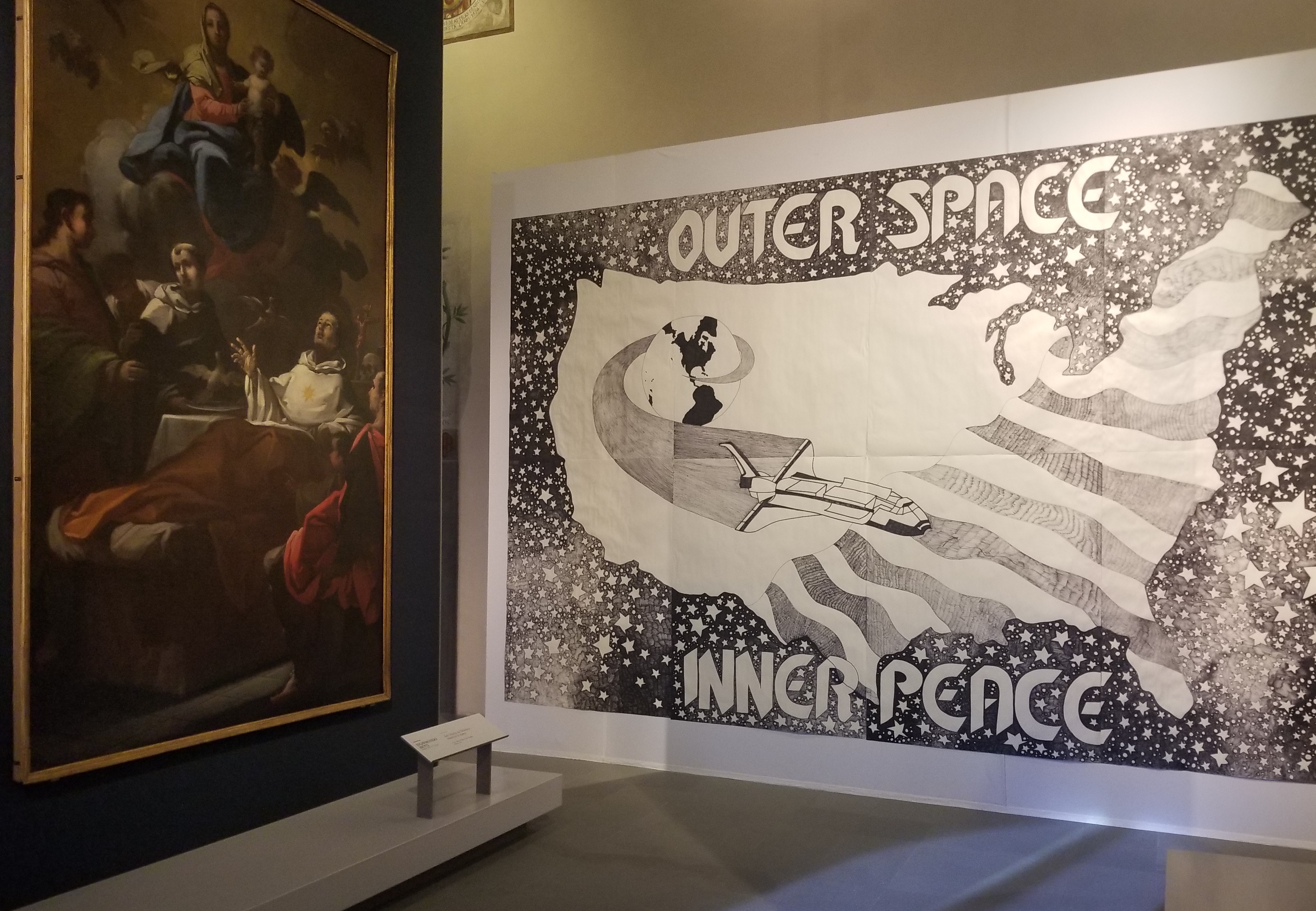 An exhibit at ‘Hi Woman!,’ next to a work of Baroque art. Photo by Maddie Aub

On Monday, March 7, Prato’s Palazzo Pretorio Museum will grant free entrance to all women in celebration of International Women’s Day on March 8, which falls on a Tuesday, the museum’s closing day. Here is a live report of the current show hosted by Palazzo Pretorio, “Hi Woman! The News of the Future.”

The exhibition “Hi Woman! consists of contemporary pieces hosted by the Palazzo Pretorio museum, which contains historic works of art from the Medieval, Renaissance, Baroque, and Neoclassical eras. In particular, the museum is known for having many beautiful depictions of the biblical Annunciation scene in which Mary receives the news from the Angel that she is pregnant with the Christ Child. Given this pre-existent collection, the museum is a perfect – yet simultaneously paradoxical – venue to host “Hi Woman.”  While the 22 exhibits showcased demonstrate the talent of modern artists who are women as Mary was, the intention of curator Francesco Bonami was also to highlight the key difference between these women artists and Mary’s story: freedom.

The freedom with which the 22 artists in the show were given to create their pieces contrasts with the lack of freedom or choice Mary had in the scene of the Annunciation. This sorrowful side of Mary’s life – that is, the aspects of her life that were lost to the responsibility thrust upon her – is put on display in an unfamiliar way through the “Hi Woman” exhibition. The works that explicitly feature women, such as one on the ground floor by Jenny Saville titled, “Fate 3,” show what Mary’s life as a woman may have looked like behind her responsibility. In Saville’s piece, a sensual woman is depicted with a seemingly lost identity, no clear face shown, and she is all alone in a gray setting, alluding to Mary’s complete life shift and the loneliness that likely followed the Annunciation.

Similarly, on the top floor, there is a video by Koo Donghee titled, “Tragedy Competition,” which displays crying people in a brutally honest and fearless way. The video sends echoes of human despair through the entire room of sculptures in which it is playing and in the artist’s statement, its purpose is explained: “Weeping is not part of the Annunciation story. Yet the Madonna must have cried…”

The artistic honesty and freedom of expression is one of the most refreshing aspects of the exhibition and it really greets viewers in a modernized and clear-cut way, even through the simplicity of its direct title, “Hi Woman.” This unprecedented showcase reverses gender roles and curates an imagery greeting where women are presenting the greeting to the viewer, with the intent of opening a dialogue on women’s roles in the future. In a way, it creates a narrative where women are both the bearers and recipients of an abstract yet concrete notion surrounding change.