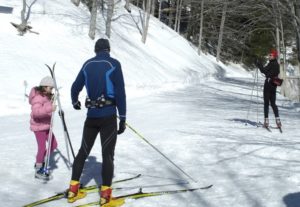 On March 8, International Women’s Day, all the ski runs—Selletta, Ovovia, Val di Luce and Pulicchio—at this Tuscan ski resort will give women a € 1 ski pass if accompanied by a paying adult.  Two can ski for €29 instead of the regular price of €56.

Take a train to Pistoia, then a COPIT bus from Piazza Stazione which takes the passenger steadily higher and higher into a winter wonderland.Alternatively, Florence’s CAP terminal in Lungarno Alinari provides bus service to Abetone.

Here is a live report from the slopes by Vista, Florence & Tuscany reporter Amelia Murphy:

“It came as a surprise to me that a whole new side of Tuscany exists just two to three hours away from Florence, an entirely different world by the name of Abetone. Mountains of snow dominate the town filled with a kind of Italian people I’d never met before: the Italians who embrace the snow and cold.

It still hadn’t stopped snowing, so the powder was perfect and I glided down the ski runs with joy. There are four parts to the ski area of Abetone: Selletta, Ovovia, Pulicchio and Val di Luce. My goal the first day was to ski the first three, which covers a large piece of terrain and could have kept me occupied for many more days than just one.

Ovovia and Pulicchio have beautiful wide open runs along with some trails through the trees, while Selletta has more winding blue trails with the option of going off trail into the trees. On Selletta I enjoyed skiing like my adventurous dad and 19-year-old brother. I left the groomed trail and went off into the silent trees and untracked powder. I felt like I was in the middle of nowhere swishing through powder and casually dodging trees.

Skiing in Val di Luce was relaxing because all the runs led to the same place, and I only had to ski one ski area that day. I just kept going up and down, savoring the sparkly snow, following others’ tracks and making my own. I reluctantly skied back to the bottom of Selletta at the end of the day, hitting some fun powder and gliding through the trees. It had been a refreshing and freeing ski day.”