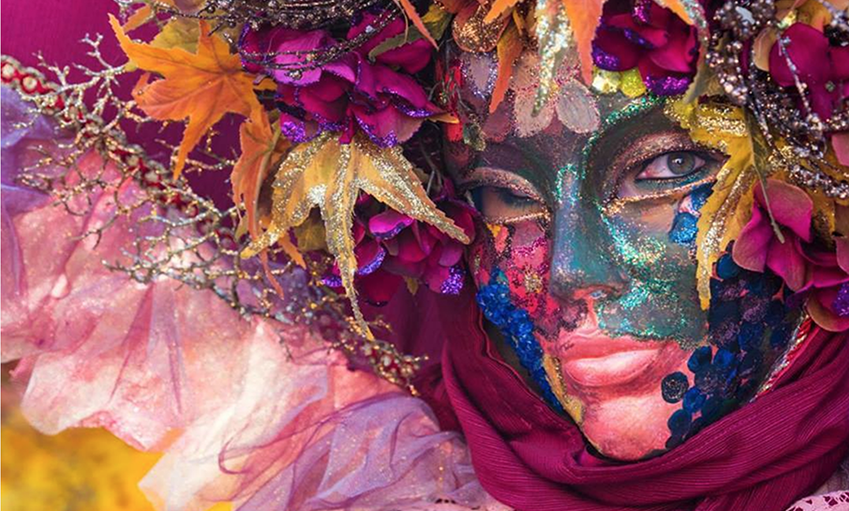 Carnival time brings Italians into the streets for revelry and merrymaking like no other time of the year.  The air is filled with the boom of drums, clanging horns and shouts of joy, but for those who find the crowds in Viareggio or Venice intimidating, consider joining Carnival festivities in one of the villages throughout Tuscany. These smaller towns offer parades, children’s activities and partying without the pressing throngs and traffic woes.  Some offer free admission, and all celebrate the season with a local flair.

The following is a guide.  Here is also a report on this year’s edition of the famous Viareggio Carnival.

This charming medieval village in the heart of Tuscany hosts a celebration of ancient origins.  Visitors strolling the streets can encounter costumed residents dressed as the Queen of Hearts, Kings’ Heralds, Scheherazade and, above all, King Bocco, the lord of the village.  Castiglion Fibrocchi prides itself for its baroque-inspired masks created for Carnival and visitors will see townspeople young and old wearing the elaborate works of art.

The festivities are commemorating the 500th anniversary of the death of Leonardo da Vinci.  Parades are scheduled for February 23 and 24 at 2:30 pm.  Admission is €8, children under 10 enter free.

Carnival in the Mugello north of Florence has roots back to the era of the Medici rulers.  Borgo San Lorenzo pays particular attention to children with parades of hundreds of masked characters, floats, dancing, train rides and fun amidst streamers and confetti.  This year’s program includes a classic car show and live music by the Crazy Eights Band on February 24; a special clown show is scheduled during Carnival celebrations on Sunday, March 3.  The action centers around Piazza Dante, all events are free to all ages and the parades begin at 3 pm.

The hamlet of Pescia, famous for its greenhouses that cultivate carnations and other flowering plants, focuses its Carnival on children with special floats for the little ones, face painting, soap bubble artisans and crafts.  Families can visit the Castle of Frozen where Elsa, Anna and Olaf will be waiting to greet them.  Live music, plenty of paper confetti and the special sugar-sprinkled fried dough pastry called cenci add up to a festive family experience.  The February 24 parade is at 2:30 pm and admission is free of charge for all.

This town set between the Apuan Alps and the Mediterranean Sea near Lucca recreates a festive atmosphere yearly that dates back to the early 20th century.  Join the residents on Sunday, February 24 at 3 pm for a parade complete with masks, music and merrymaking.  On Tuesday, March 5, the town puts on a special carnival for children in Piazza Matteotti at 5:30 pm.

Orbetello, an ancient Etruscan settlement, is situated on a small sliver of peninsula surrounded by a lagoon.  This island-like town celebrates Carnival with a colorful parade of papier mâché floats, called carri, moving down the Corso Italia accompanied by music, costumed dancers and rife with satire.  The objects of insult are caricatures of famous political, pop and sports figures with no mercy given for their flaws or foibles.  Costumed characters on the floats throw candy and confetti on the crowds below adding to the joy of children.  Carnival will take place on the following Sundays: February 24, March 3 (2:30 pm) and March 9 at 7:30 pm.  On Thursday February 28, a special children’s parade will delight small fry (3:30 pm).

This southern Tuscan village, perched high on a tufa stone cliff, known as Little Jerusalem for its history of a large Jewish community, observes Carnival in a unique manner.  Pitigliano hosts a Carnival with a parade of “Apetti,” the small three-wheeled motor vehicles that replaced donkeys to transport goods and people up and down the hillside.  Apes, the word for ‘bees’ in Italian, are lovingly transformed into floats for the parades on February 24 and March 3 (2:30 pm).

First recorded in 1539, his year the Tuscan village in the heart of Valdichiana celebrates its 480th Carnival.  In several Sundays of celebration King Giocondo, the festival’s mascot, stars as the locals bring the art of papier mâché to the streets.  The four neighborhoods of the town work all year to create huge allegorical floats in a competition for the coveted Carnival Cup.  Visitors can expect an on-going street party with music, dancing, confetti, jugglers, live shows, rumbling Harley Davidson motorcycles and delicious local cuisine of course.

For a close-up glimpse of Minnie Mouse or Donald Duck, “Carnevalandia,” just for children and their parents, provides shows, games, craft workshops and a Disney parade with more than 100 fairytale characters.  Ending the festival on March 10, citizens and visitors alike gather in the main piazza where King Giocondo, fashioned of straw and rags, is set on fire, symbolizing the ritual purification of the onlookers.   Parades will be held on February 24,  March 3 and 10.  Events commence at noon with the parade beginning at 3 pm.  Admission is €9, children free.  There is free parking at Valdichiana Outlet Shopping Center including shuttles every 15 minutes to the town’s historic center.  (rita kungel)