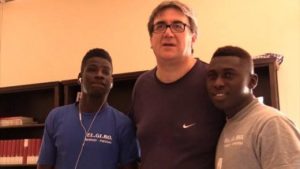 Pistoia priest Don Massimo Biancalani, has turned premises on the property of his parish rectory into a pizzeria. Don Biancalani used his parish of Vicofaro to create “Pizzeria Refugee,” where 12 male migrant workers are behind the scenes cooking. Customers who are able buy a pizza can offer what they feel it is worth and those who can’t afford it can eat for free.

The pizzeria is popular.  See video.

Don Biancalani has been the center of controversy since August after posting a photo of migrants swimming in a public pool. His caption stood up to racism and fascism. The far-right party Forza Nuova has been verbally attacking him and even attending his masses to intimidate him. Don Biancalani’s parishioners have stood by him, despite fascist protests at their church. Most recently he has received a leaflet with the Italian flag and swastika from representatives claiming to be the “Fourth Reich.”

Biancalani has not let any of the intimidation stop him. He says his stance on migrants comes from the welcoming and non-judgmental principles of Catholicism. Since the end of September, he has been giving the refugees work every Saturday evening from food preparation to cleaning, in order to be able to run the pizzeria.

All the profits that don’t go towards buying the ingredients go to the workers. What they make on Saturday evenings, they send back to their family. Biancalani believes that this will give them experience in a work environment and an opportunity to learn about budgets and expenses.

The workers have all received a certification to handle food and have taken cooking classes. Biancalani hopes that the pizzeria becomes so successful that they will be able to open regularly on Friday nights and holidays.