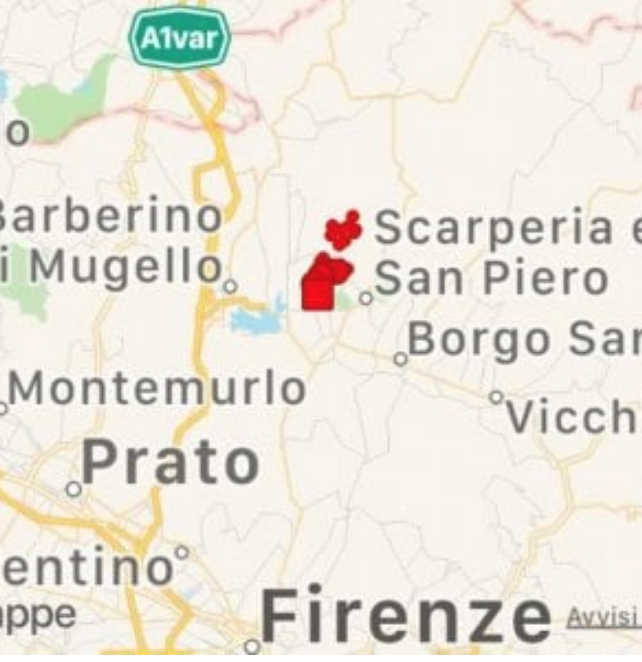 Map showing the area affected by the earthquake

An earthquake with a magnitude of 4.5 on the Ritcher scale occurred near the township of Scarperia San Piero in the the Mugello Valley north of Florence at 4:37 am on December 9.  People left their homes and sought refuge in their cars during a night of intense rainfall.  There is no report of casualties although buildings have been damaged in Scarperia San Piero as well as in Barberino di Mugello.  The  Safety Protection Commission (Protezione Civile) is implementing emergency measures; those who need help or information can call 329 6503000.

Other tremors were registered at Scarperia San Piero: several measuring 3.4 between 3:38 and 3:55 am and another at 4:42 am at Barberino di Mugello.  Schools, including kindergarten, are closed in those areas today.

The aftershocks were felt in Pistoia and Florence.

The following train stopped running at 4:45 am: Florence-Bologna, Florence-Milan, Florence-Prato, Florence-Borgo San Lorenzo, Prato-Pistoia and Florence -Empoli-Pisa.  Frecciarossa train service between Florence, Bologna and Milan resumed at 8:30 am although there are delays of minimum 1/2 to 2 hours.  Trenitalia is still verifying is there are any resulting problems impacting regional trains lines so many trains have been cancelled.  Regional trains started running again at 2 pm, but there is a minimum four hour departure delay.

In 1919 an earthquake with a magnitude between 7 and 8 on the Ritcher scale hit Vicchio in the Mugello area at 10 in the morning, causing 40 deaths and the destruction of half the town’s buildings.  Dicomano, Borgo San Lorenzo, San Godenzo, Marradi, Firenzuola, Scarperia, Barberino, Londa, San Godenzo and part of Rufina and Pontassieve also suffered damage.