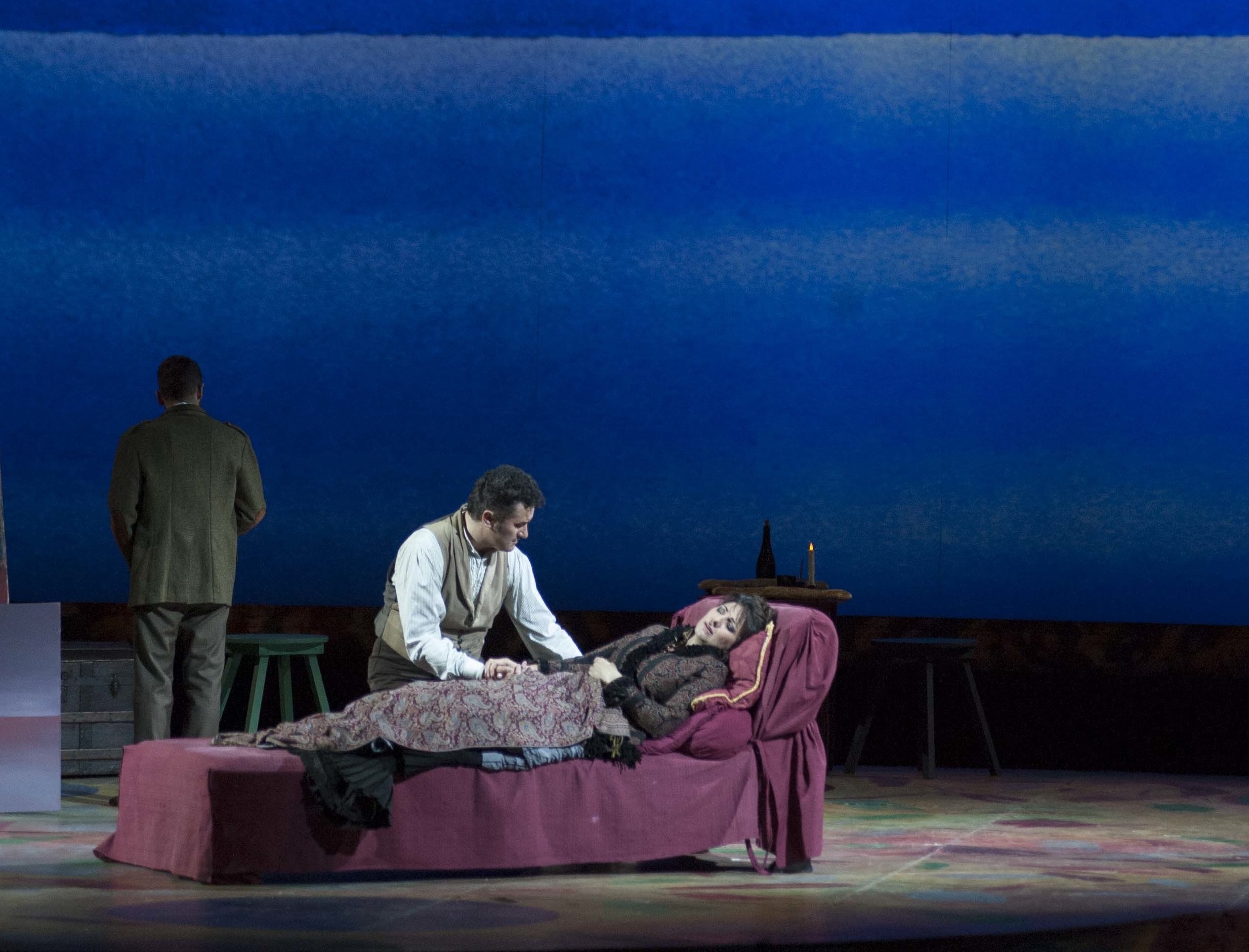 A scene from ‘La Bohème’

The 67th annual Puccini Festival comes to Torre del Lago on the shores of Lake Massaciuccoli near Viareggio which inspired the great composer.  From July 23 to August 22 music lovers can immerse themselves in the compositions of the man from Lucca regarded, along with Verdi, as the greatest composer of Italian opera.  Originating from a dynasty of musicians, he was proceeded by four generations of composers of opera and music for the church.  During the festival the theatre also becomes the residence of young artists from the Academy of the Theatre of La Scala for one week.

This year’s festival theme, Tanti Baci, or Many Kisses, suggests the kiss—one of the most romantic gestures expressing feelings and emotion.  The leitmotif also symbolizes the desire of the entire world today to return to the possibility of expressing one’s feelings and the desire to reopen the theatres and restart the music.  The festival creators offer signs of hope and recovery of the cultural, social and economic health of Tuscany.

For opera lovers this year’s festival offers a dream schedule featuring the composer’s three most famous operas, Tosca, Turandot and La Bohème.   Uniting the rich musical and theatrical fabric of Tuscany, the organizers offer a program with the collaboration of the Orchestra of Tuscany, the Theatre del Giglio of Lucca, the Goldoni Theatre of Livorno, the Academy of the Theatre La Scala, the Simonetta Puccini Foundation, the Music Association of Lucca and the Prato Textile Museum.

To kick off the events, the opera Tosca begins on July 23 and continues nightly from August 6 – 13.  Director Stefania Sandrelli, in her debut as an opera director says, “My dream is to direct Tosca in Viareggio in front of Puccini’s lake.”  She adds that her own grandfather knew Puccini and heard him perform at the Gran Caffè Margherita in Viareggio.

Turandot, Puccini’s extravagant portrayal of ancient China and fairytale set to music, comes to the stage from July 24-30 and August 14-20.  Directed by Daniele Abbado, son of Claudio Abbado, this unfinished opera, staged and the finale composed by Luciano Berio, features the tenor aria “Nessun Dorma” one of opera’s most well-known songs.

La Boheme takes the stage on July 31 and August 7-21.  The opera tells the tale of a love affair between a poor poet and an equally poor seamstress living in the Latin Quarter of Paris in the 1840s.  The tragic drama discloses the ill-fated love story of Rudolfo and Mimi, replete with scenes from the Bohemians of 19th century Paris.  The work, directed originally by the late Ettore Scola, was filmed by his grandson Marco Scola Di Mambro who originally created the show with his grandfather.

Other events fill the program with Caruso Forever performed on August 2.  By and with Stefano Massini and conducted by Alberto Veronesi, the show is a tribute to Enrico Caruso on the 100th anniversary of his death.  Dubbed ‘the greatest tenor,’ he met Puccini in 1897 in Torre del Lago where the composer accompanied him on piano for an audition.  At the audition’s end, Puccini uttered the question, “Who sent you.  God?”

On August 18 “The Other Giacomo” comes to the theatre.  Director Renato Raimo brings to the stage the restless soul of Giacomo, the genius from Lucca who loved hunting, adored automobiles and lived his life as a womanizer with numerous affairs and mistresses while dedicated to his lifelong wife Elvira.

The festival culminates on August 22 with Puccini Promenade.  The seaside promenade is transformed into an open-air theatre, a circuit of one kilometer with 10 pianos and more than 50 artists performing Puccini melodies in nine sites along the Promenade.

Tickets are available only online or by phone and cannot be purchased directly at the festival site.  For complete information and ticket purchases see website:  www.puccinifestival.it

NEW LIFE FOR THE PUCCINI VILLA IN VIAREGGIO

On the occasion of the 100th anniversary of Giacomo Puccini’s arrival at the villa where he spent the last years of his life, the site has undergone a complete restoration and once again appears as it was during the time of his residence.  The composer and his family previously lived in the Torre del Lago, but as development of surrounding peat bogs with heavy equipment produced increasing noise and pollution, he purchased nearby land a few kilometers north on the edge of a pine forest.  Commissioning an architect and engineer from Pisa, the family moved into the villa in December 1921.

His studio contained a Steinway grand piano, now in the Puccini Museum in Lucca, and it was there the Maestro was composing Turandot when he died of a heart attack following treatment for throat cancer.

The villa can be visited on Saturday afternoons until September 18 with four time slots on the hour from 3 to 6 pm.  It will also be open Sunday August 22 in conjunction with the Puccini Promenade.  Guided tours are free with reservations by email to visite@puccinimuseum.it.

The Puccini Museum in Torre del Lago, his refuge that inspired most of his most well-known works, was recently restored as it was in 1905.  A gift from his granddaughter Simonetta Puccini, the villa features original furnishings and fabrics with emphasis on shades of green reflecting the natural surroundings.  The villa seems suspended in time with visitors able to imagine the lake view inspiring the great composer.  Audio guides are available in English, Italian, German and French.  For hours and further information, see the website:  www.giacomopuccini.it

The Puccini Museum in Lucca, in the home where the composer was born, is open daily from 10 am to 7 pm until September 30.  Free guided tours in English are available on Fridays at noon.  See website for further information:  www.giacomopuccini.it

Access to all venues is regulated in compliance with current anti-COVID restrictions.  Body temperatures will be taken at entrances and masks are required.  (rita kungel)