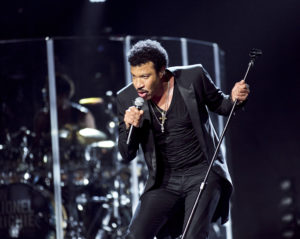 Until July 27:  Piazza Napoleone, Lucca. Tickets sold per concert, online and in person.

Soul icon Lionel Richie will be the special guest artist on July 12 starting at 8:30 pm. Richie, famous for infectious hits like All Night Long and Three Times a Lady, was a crowd favorite at the UK’s Glastonbury Festival last year.  The evening also offers Earth, Wind and Fire.  Creating music since the early 1970s, the group will interpret their songs inspired by R&B, jazz, funk and Latin sounds.

July 13 brings another double bill: the innovative genius of Esperanza Spaulding and Vinicio Capossela (9 pm).  Grammy award winning singer-composer-bassist Spaulding, known for his innovative genius, draws on many genres for this evening of what can be described as rock performance art.  Italian Capossela, singer, songwriter, poet, illusionist and showman, is certain to offer a highly original evening of entertainment.

Along with the rest of the line-up, Neil Young too has left his mark on music. He will be in Lucca on Saturday, July 16 (9 pm) along with the ensemble Promise of the Real. Young is known for his deeply personal lyrics and unique guitar work, and, joined by the group headed by Lukas Nelson, son of Willie Nelson, will deliver a set full of rock and folk hits.

On July 17, the spotlight is on rap music. In a unique event called “You Wanted Rap” (Volevi il Rap), four of Italy’s biggest rappers will appear on the same stage, including Clementino, known for rapping in Neapolitan dialect.  Fabri Fibra, Gué Pequeno and Marracash (who recorded with Tiziano Ferro) will join him in an exciting night of contemporary Italian music (9 pm).

Pop singer Anastacia, popular in the United States during the early 2000s and with rising popularity now in Oceania and Europe, will open for the band Simply Red on Wednesday July 20 (9 pm). This British soul and pop group has sold more than 50 million albums since the mid-1980s.

On Thursday, July 21 (9:30 pm), it is Italy’s turn again to take the stage in Lucca with Negramaro. The rock band whose name derives from Negroamaro, a robust red wine produced from the group’s native area of Salento in Puglia, can surely fill the square of Tuscan treasure with sounds of percussion, lively lyrics and great guitar.

Another Italian favorite, Marco Mengoni, will perform on Saturday, July 23 (9:30 pm). A winner of Italian X Factor and the San Remo Music Festival, the artist has carved himself a place in the Italian music scene with hits like L’essenziale and Pronto a correre. One of the festival’s free events, this evening is not to be missed. For more details, see www.summer-festival.com.  (annikka oelhafen & rita kungel)