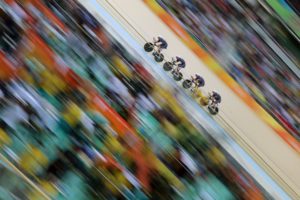 A picture is worth a thousand words, but the winning photos of Sipa 2017 Contest will leave one speechless.

The first-place photo for the Sports in Action category is of the English male cycling team not only winning the gold in the Rio de Janeiro Olympics, but setting the world record for their category.

The photographer, Tim Clayton captured the intensity of the moment with blurs of colors in the crowd, but focused on the cyclist themselves giving the picture a high energy.

Second place was awarded to Jason O’Brien with his photograph titled “Superman” which pictures French tennis player, Gaël Monfils during his fourth match at the Australian Tennis Open. Monfils appears as if he is suspended in the air while he dives to hit the ball.

These photos and the winners of the other categories (Story-telling, Fragile Ice, Architecture & Urban Spaces, Animals in their Environment, the Beauty of Nature, Fascinating faces and characters, Journeys and Adventures, General Monochrome, General Color and Under 20) will be on display inside the “Beyond the Lens” exhibit in the former distillery of Stellino in Siena.