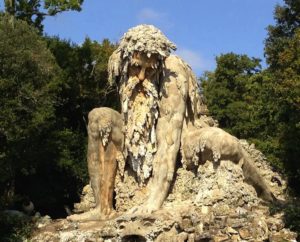 As the first warm beams of the sun touch the ground, the Medici Park of Pratolino wakes up from its winter sleep; the gardens reopened on April 5, accessible to the public with free admission. The park is on the ATAF bus line, #25 from San Marco.

Pratolino and the Medici Villas are under UNESCO heritage protection. The park complex boasts rich flora and fauna, and is home to 99 animal species and rare trees and plants like white pines and giant oaks.

The park was originally designed to be the scene of the marriage of Francesco de Medici and his second wife Bianca Cappello. They entrusted the Flemish artist Giambologna to design “The Garden of Wonders” as a wedding gift, and a summer home as well, but because of the sudden death of the couple, the project has never been finished.

The Flemish sculptor Jean de Bologne (1529 – 1608), known in Italy as Giambologna, was entrusted with the transformation of forests and fields into a fairytale setting for the noble couple. Employed by the Medici court, Giambologna had already created sets and decorations as a backdrop for Francesco’s first marriage ceremony. He was to design the sculpture group The Rape of the Sabines in Piazza Signoria’s Loggia dei Lanza as well as the Ocean Fountain in the Boboli Gardens.

An exponent of the Mannerist art movement, Giambologna’s “Giant of the Apennines” blurs the line between nature and art. Made of masonry and plaster, the Giant’s massive body is decorated with stonework that imitates stalactites inside a grotto. The sculpture, in fact, originally contained a grotto decorated with frescoes, a fountain, and water jets.

The colossal 14-meter (44 ft.) high half man-half mountain creature with rooms and caves carved inside.   The statue blends into the natural ambiance and shows the artistic genius of the master. Still today the “Giant” overlooks a pond filled with water lilies.

Giambologna was also responsible for overseeing the landscaping and fountains that were to perpetuate a dreamlike atmosphere of a place that would become known throughout Europe as “The Garden of Wonders.” After Francesco’s and Bianca’s unexpected deaths – of malaria or poison – in 1587, the later Medici rulers added their touch to Pratolino. One, Ferdinando, inaugurated a theatre that would host concerts by Handel and Scarlatti.