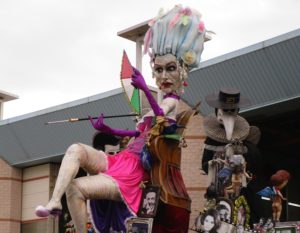 ‘A Love so Great,’ float detail

Celebrants go all out for Carnival’s grand finale culminating on Mardi Gras (Martedi Grasso or Fat Tuesday) but which extends through first weekend of March with blowout parades, masquerade balls, street decorations and fireworks. Here is a guide to join the merriment.

Wear a mask, have a ball, and prepare for jubilance at the 144th annual Viareggio Carnival’s many events ranging from neighborhood street parties and fireworks to the signature parade of massive papier-mâché crafted floats. Anyone who participates in the festivities is encouraged to dress up; now is the time to put on your brightest.

Starting at 7 pm and continuing well after midnight, the Darsena neighborhood has organized the local Martedi Grasso fest with music, lights, dancing and food stalls to delight in traditional Viareggio flavors. The experience will be repeated the weekend of March 4 – 5, with food available starting 12 noon on Sunday in anticipation of the final parade. Fireworks will light up the evening sky above the sea on both February 28, when the prize-winning floats will be announced and at the recap parade on March 5.

Envisioned and built by the artistic minds of Viareggio, building sized vehicles offer a satirical view of some of the world’s most pressing issues.

Leading the parade are the “wagons of first class,” the largest floats.  The “wagons of the second class” follow as the parade marches on. The size of the floats may shrink, but the parodies stay relevant. “The Chocolate Factory” by Edward Ceragioli is a grotesquely silly blend of Willy Wonka and ex-prime minister of Italy Matteo Renzi. In a world where his machines seem to produce wonderful chocolate, the audience is given a peek of Renzi’s secret recipe.

“A Love So Great” (Un Amore Così Grande) by  Jacopo Allegrucci compares Italy to a rich and mature woman, surrounded by silver framed pictures of her past loves while shady figures loom in the background, hoping to exploit again.

While Viareggio is particularly well known with the parades getting international attention – televised and attracting many visitors – there are many other Mardi Gras week Carnival celebrations throughout Tuscany.

Paperino, Donald Duck, takes center stage in Carnival festivities at a village near the Prato. Celebrating 40 years of revelry in Mr. Duck’s namesake Paperino, the Martedi Grasso final parade of floats and a full accompaniment of revelry and merry-making starts at 3:30 pm (admission €2.50).

Carnival in Borgo San Lorenzo, in the Mugello valley north of Florence, traces its roots back to the time of the Medici rulers. This year’s celebrations include parades with floats, trains, pirate ships and dragons on stilts. Children, but not only, can look forward to music, shows and face painting. The action, centered around and in and the central Piazza Dante, begins at noon with free entrance for all (Tuesday, Feb. 28, 2:30 pm).

This village, in the province of Arezzo claims Italy’s oldest Carnival dating back 500 years. The final events of the local festival “The Kingdom of King Giocondo” will be held on February 28 and March 5.

Jugglers, huge balloons, clowns and costumed revelers fill the streets tossing paper confetti. Games and carnival rides entertain children of all ages and music is in the air. But the main attractions are the parades when the enormous floats move slowly down the main street. The political and allegorical themes are often jesting representations of popular culture icons and world leaders. In times past riders on the floats threw lupines, chestnuts and pieces of salt cod at the spectators below, but today candy and confetti fall at the feet of the waiting crowds.

Four rival neighborhoods work all year on their floats that are judged by a jury composed of a painter, a sculptor, a journalist, a theatre set designer and an art critic. At the end of the festival, the float with the most votes wins the prized Carnival Cup.

On February 28, a straw and rag effigy of King Giocondo will be set alight in the main piazza; a symbol of collective purification before Ash Wednesday.

South of Tuscany in the Maremma, not all proved to be fun and games at this year’s Carnival in Follonica. On the first day of Carnival an effigy of recently resigned Prime Minister Matteo Renzi, wearing a mask of the current Prime Minister Paolo Gentiloni, toppled off a float falling on the crowd below. Unfortunately several spectators were injured and taken to hospital, causing pundits to compare the situation to Italy’s current political climate.

At the conclusion, Follonica hosts a dinner followed by music, dancing, crafts made for Carnival in honor of the six neighborhoods of this locality on the Tyrrhenian Sea (Tuesday Feb. 28, 7:30 pm).

Rising on a small peninsula and surrounded by two lagoons, the town of Orbetello this year plays host to the 48th edition of the Carnevaletto of the Three Coins. A gala parade complete with brightly colored papier mâché floats, masked groups and music winds its way down Corso Italia entertaining visitors and locals alike. (Tuesday, Feb. 28, 2:30 pm). (rita kungel & carson cecil)