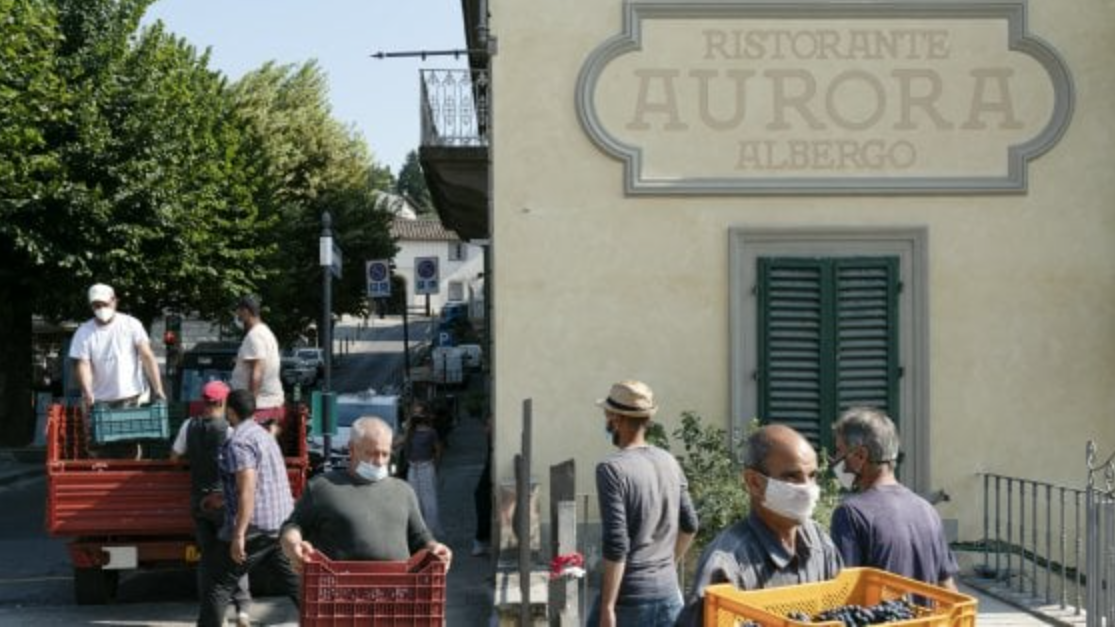 Iconic Tuscan winemaker Bibi Graetz, producer of Testamatta and Casamatta labels, has transformed Fiesole’s Piazza Mino into a working winery.  Originally a painter who graduated from Florence’s Academy of Art, Graetz grew up in the Castello di Vincigliata situated on a hilltop between Fiesole and Settignano.  The medieval castle and its surrounding 200 acres of vineyards inspired him to apply his artistic talents to making wine in the late 1990s.

Graetz purchased the historic Aurora Hotel last year and workmen can be seen refurbishing the structure as he pursues his vision of creating an urban cantina.  The winemaker plans to use the former hotel as his family’s private home as well as a winemaking facility and tasting room in the French chateau style.  A few luxury hotel rooms are also in the plan.

In Piazza Mino locals and tourists watch as tractors pulling wagons filled with grapes circle the square.  The adjoining Blu Bar patio, previously the spot  where tourists descended the bus and admired the breathtaking views over Florence nowadays contains crates filled with grapes and masked workers de-stemming the last bunches.  The bar’s cellar formerly a disco, serves as a tasting room complete with French oak barrels.

The winemaker makes his wine from traditional Italian grapes Sangiovese and Canaiolo from Tuscany and Vermentino from the island of Giglio off the Tuscan coast, which are crafted into wines with imaginative names such as Testamatta (Crazyhead), Casamatta (Crazyhouse) and Bugia (The Lie).  The labels feature Graetz’s original abstract artwork.  Tasting the varietals, one savors the pure fruit and complexity of the harvests of the hand-tended vineyards in Fiesole, Lamole near Greve in Chianti and the Island of Giglio.

Of Swiss, Israeli and Norwegian descent, Graetz continues to put his heart and art into his wines with his philosophy, “Do what you love and what you really believe in and keep it simple.”  (rita kungel)