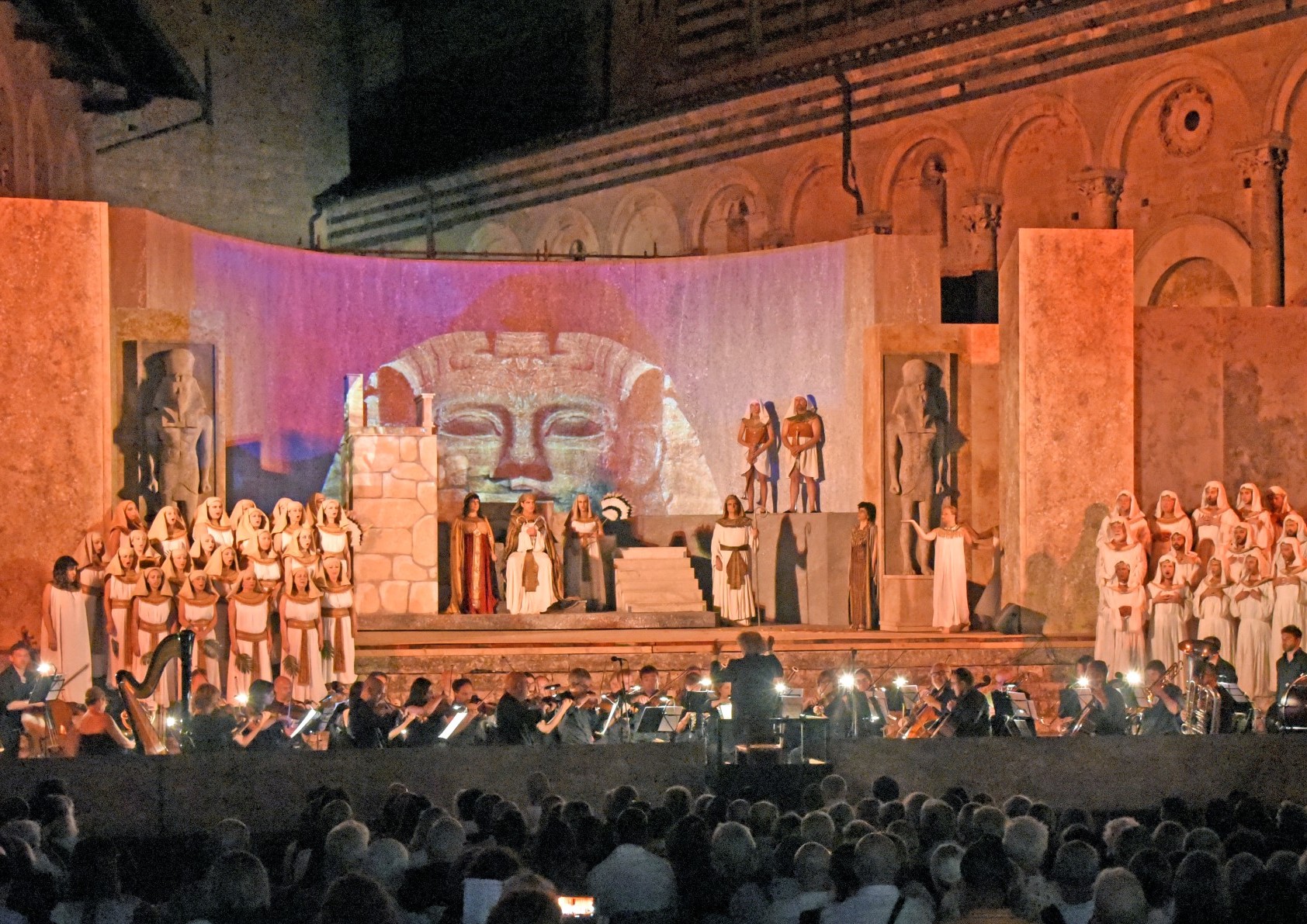 A past performance of “Aida” at ‘Lirica in Piazza’

“Lirica in Piazza” (Opera in Piazza) has unveiled a new edition from August 3 – 5, 2022.after a two-year hiatus coinciding with the pandemic.  The public is invited to a series of opera shows in Massa Marittima performed by internationally recognized talents, accompanied by 40 singers of the Italian Lyric Choir, in addition to live music from the Orchestra delle Cento Città.  All performances start at 9:15 pm.

Situated on atop a hill, Massa Marittima offers a unique setting in the town’s main square, which is  surrounded by medieval buildings such as the Cathedral of San Cerbone and the Palazzo del Podestà.  Since 1985, “Lirica in Piazza” has transformed the space into an open-air theater for a three-day opera concert series, combining classic operas with modern multimedia technology, original sets, and lighting effects specially created for the location.  The legacy of masters of the opera will reverberate throughout the square during the evenings, showcasing a program of works by Giuseppe Verdi and Mozart.

“Lirica in Piazza” opens with one of the greatest dramas by Shakespeare, Othello, on August 3.  Verdi’s Othello takes places in four acts which focus on the tragic story of Othello the Moor and his beloved wife Desdemona.  The plot is characterized by love, jealousy, betrayal, revenge, and ultimately redemption.  Directed by Gianmaria Romagnoli, with a libretto by Arrigo Boito,  Gianluca Zampieri, a great award-winning tenor, plays the title role.

The following day presents an opera in chamber form, an event entitled “Moni Ovadia on the Theme of Don Giovanni,” by Mozart.  Maestro Sergio La Stella on piano will accompany the performers who will be singing  arias from Don Giovanni while Ovadia narrates the story.

The festival comes to a conclusion with the romantic opera La Traviata (the Fallen Woman), set to music by Giuseppe Verdi with a libretto by Francesco Maria Piave.  Adapted from the novel “La Dame aux camélias” by Alexandre Dumas fils, the opera tells the story of the tragic love between the courtesan Violetta and the provincial young man Alfredo Germont. The opera is directed by Natale De Carolis, a famous baritone who has graced the stages of some the most important theaters in the world. The protagonists of the evening will be the soprano Paola di Gregorio and the Tuscan tenor Giorgio Casciarri.  (elif aytemiz)

The pre-sale of tickets is in all the Toscana and TicketOne box office sale points and available online on www.boxofficetoscana.it and www.ticketone.it.

This year a ticket-sales point in Massa Marittima will also reopen at the headquarters of Unicoop Tirreno in via Enrico Fermi.