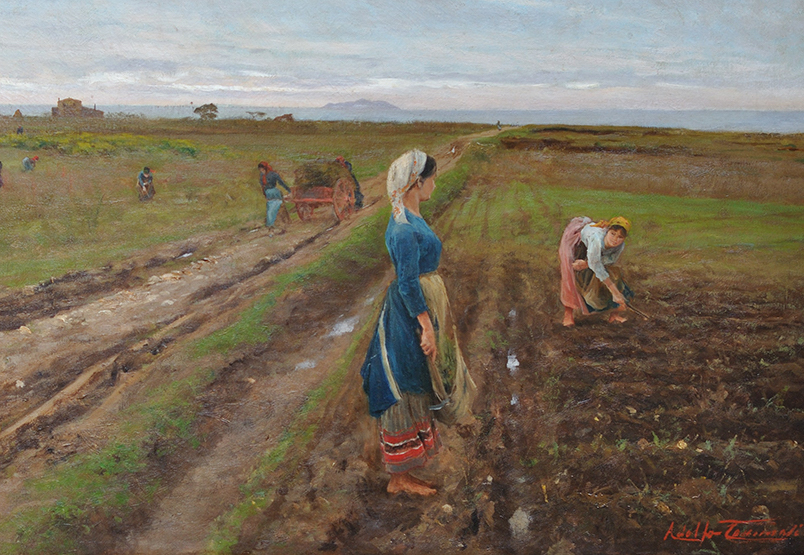 The weekend of July 17 – 19 is the last chance to attend the Centro Matteucci exhibition in Viareggio featuring famous Italian works from the late 19th and early 20th centuries. Art enthusiasts will not only have the opportunity to admire the craftsmanship of Tuscan Impressionism (Macchiaioli) and post-Macchiaioli painters in person, but can also purchase one or more for their personal collection.  Concurrently, a remodeled version of the Puccini Festival is going ahead this year in Viareggio and Torre del Lago. Through August, guests will have the privilege of experiencing live performances, all while still complying with health protocols.

In the 1850s and ‘60s, Caffè Michelangiolo near the Florence cathedral was where Telemaco Signorini and Vincenzo Cabianca would meet their fellow artists for discussions that ultimately would lead to the creation of the Macchiaiolo style, considered a precursor to French Impressionism.  Both groups of painters broke away from antiquated conventions, producing a great deal of their work en plein air (onsite outdoors). The influence was often reciprocal. Several Paris-based Italian artists, including Giuseppe De Nittis, Federico Zandomeneghi and Giovanni Boldini, were inspired equally by Macchiaioli and French Impressionism canons while remaining true to their individual visions.

This progressive Tuscan school is known for its technical innovation and a strong social focus. Macchiaioli exponents experimented with chiaroscuro (light and shadow) imagery, and developed the use of macchie—smudges produced using quick, short brush strokes, lending, above all, a sparkling quality.  Composed of multiple layers, canvases of this period capture the interplay of natural light.  Not only did this prove an effective method for imitating the nature of light that led to Impressionism, it also captured the immediacy of daily Tuscan life during and after the Risorgimento (the movement for Italian unification, which resulted in the Kingdom of Italy in 1861).

The only non-Italians by heritage included in the display are Lloyd and Moses Levy, Welsh in origin but Livornese by birth, Lloyd arrived in Florence at the threshold of the 20th century after completing his artistic training in Livorno. In the spirit of the 19th century Macchiaioli artists, Lloyd portrayed the Tuscan sea and countryside with a commitment to capturing natural light and color. Italian-Tunisian painter, Moses Levy, specialized in depicting life at the seaside and the pastimes of the cultural elite between the world wars.  Levy evokes harmony, beauty and a love for life, capturing light and color brilliantly, as well as the shades of the sea and the effects of the coastal sky.

Organized by Society of Fine Arts, the show is hosted in the spaces of Centro Mattucci per L’Arte Moderna, a renowned cultural center located at via Gabriele D’Annunzio 28—just one block away from Viareggio’s charming seaside promenade. The exhibition can be seen by appointment from Friday to Sunday, which can be made by calling the Centro Matteucci +39 0584 52030 from either 10 am – 1 pm or 5 – 7:30 pm to hold their place.  Admission is €5, and present health protocols apply to all guests, including wearing masks. (victoria caruso/additional reporting by rosanna cirigliano)

On July 18, the Charlie Chaplin film Modern Times will be screened with a live accompaniment from the Puccini Festival Orchestra conducted by Timothy Brock at the Citadel of the Viareggio Carnival (9:15 pm). As this was a silent film, the orchestra will recreate this experience by performing the original music from Chaplin’s famous 1936 comedy that Chaplin composed himself, produced during the pinnacle of his career as a composer.

Thanks to a concert series entitled In the garden of Paolina held on July 21, 24 and 31, August 4, 7, 11, 13 and 20, festival guests will once again have the opportunity to see live performances in the gardens of Villa Paolina (viale Machiavelli, Viareggio).  The Villa is filled with history and culture, having been commissioned by Napoleon’s sister, Pauline Bonaparte, and according to legend constructed in the place where the body of Romantic poet Percy Bysshe Shelley was washed up after a storm at sea. Pauline herself settled in and spent her last years at the villa. Viareggio will also play host to short chamber music concerts held in four of its beautiful old churches, as part of the Spiritual Viareggio concert series.

Looking ahead, on Tuesday, July 29, Sir Antonio Pappano will conduct the prestigious Orchestra di Santa Cecilia at Torre del Lago’s Open Air Theatre (9:15 pm) in a program that features pieces by Puccini as well as Beethoven, the latter in tribute to the 250th anniversary of the composer’s birth. For complete details, visit the website. (alfie king)