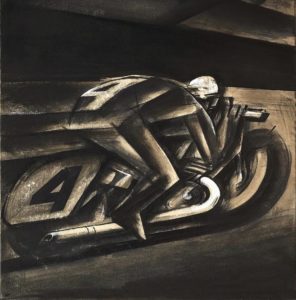 Futurism was founded in Italy in the early 20th century. This popular avant-garde ideal tried to express the energy and values of the machine age by championing the concepts of speed, power and force and in turn was seen to oppose traditional artistic conventions. The exhibition is able to draw parallels between the development of futurism and the development of the machine, as they share a symbiotic relationship.

The show begins with a display of art honoring the importance of the horse. From depicting their use in industry and busy city centers, to their entrusting relationship with families in the rural countryside, the exhibits commemorate the period of time in which horses were the most viable means of transportation.

The sculptures by Marino Marini accurately depict the interdependent relationship horse and man shared. In his work, Piccolo cavaliere, a horse and man essentially stand as one piece.

Following this, the exhibition presents the revolutionary age of the tram and train. With artists making the newly found means of transportation the focal point of their works, trams and trains are depicted as forces that etched their way into cityscapes across Tuscany. With the arrival of train stations, vital for the growth of trade, these new city landmarks were now the center of life and movement. As Futurism attempts to convey this modernization, energy and speed through abrupt lines and disfigurement of shapes, artists begin to use the energy of trams and trains as the main subject matter of their work.

Roberto Marcello Baldessari makes a train the focus of this subject matter in Soldati alla stazione. The train is depicted between soldiers and civilians as it carries soldiers to a station.  Baldessari is able to capture speed, power, and their metallic nature through the use of dark colors and sharp angles.

As man adapted machines to fit their needs, futurism also began to change its prime subject matter. In a display dedicated to the use of steamships, the exhibition makes sure to present masterpieces that depict their imposing presence in the sea and city culture. A piece by Giuseppe Viviani conveys the influence of steamships of city culture by featuring a steamboat in the painting of a wedding, casually stealing the spotlight from the bride.

The prime subject matter of Futurism shifted as these giant metallic ships transformed once tranquil city ports to bustling centers of trade. Filled with energy and movement some exhibits go as far to depict the power of steamships as they make their way through rough seas.

Having a ripple effect beyond transportation, the automobile makes a lasting impression on Futurism and infiltrates itself into popular culture, becoming the new symbol of consumerism. It also became a focal point in city cultures as giant companies like Fiat seek representation in this new art. Flooding the street with these new machines, artists similarly flooded their works with the individuality and movement that cars were able to provide to their consumers.

Satisfying the needs of thrill seekers and providing a practical outlet to many, the creation of the motorcycle, and consequently the Vespa moped, took artists by storm. Taking the spotlight in futurism, the motorcycle epitomized individuality and speed.  Gianni Bertini captivates viewers with the incredible speed and maneuverability that only a motorcycle can provide in Motociclista; through the use of sharp edges and a blurred color scheme this work serves as a vibrant example of Futurism.

Consuming man with a new ecstasy, airplanes provided artists the ability to view the landscape as seen from the sky. Futurism was now able to depict a new landscape that can only be seen from high altitudes complemented with the speed and liberty that only an airplane can provide.

Containing artistic pieces that range beyond paintings, the exhibition halls are filled with motorcycles, sculptures, and even model train stations, giving the patrons a taste of their structural complexity. (omar galicia)