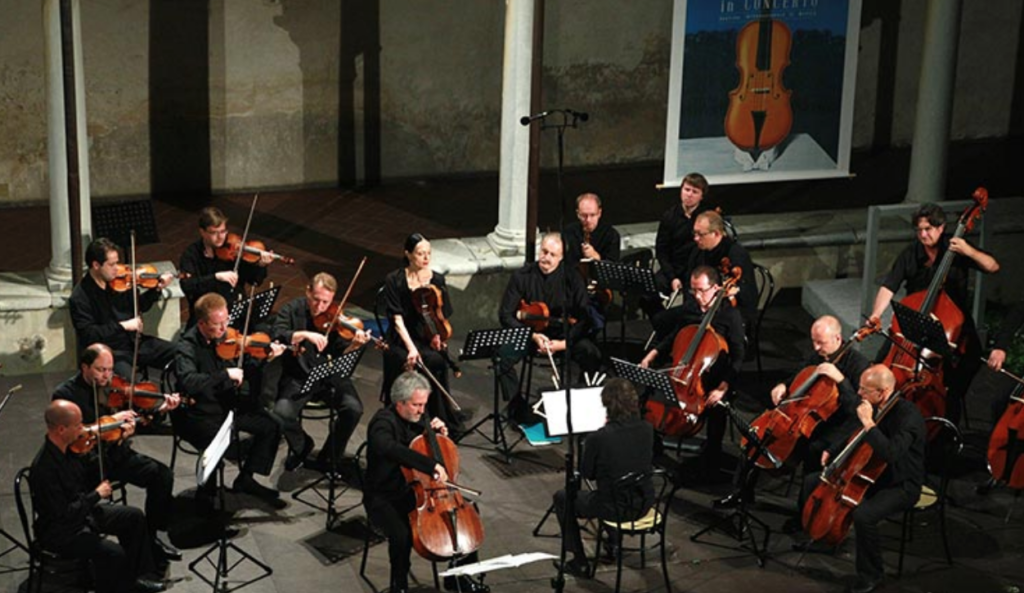 Musicians at a Pietrasanta in Concert recital

Despite Covid-19, the 14th annual “special solidarity” edition of Pietrasanta in Concerto (Pietrasanta in Concert) is happening nonetheless.  A themed concert is taking place every night at 9:30 pm through Sunday, August 2 in the medieval town in northwest Tuscany, Pietrasanta. With the bell tower and the Versilia coast’s kaleidoscopic colors in the backdrop, the concert will unfold in Sant’Agostino Church, located in the town’s main piazza.

Concurrently, there are other events scheduled in Pietrasanta during the same period.  Eight of the town’s art galleries– Accesso Galleria, Antonia Jannone – Disegni di Architettura, Barbara Paci Galleria d’Arte, Futura Art Gallery, Galleria Giovanni Bonelli, Galleria Poggiali, Marcorossi Arte Contemporanea and Susanna Orlando Galleria–will remain open during “Collector’s Night” on July 25 from 6 pm to 1 am for aficionados, investors and browsers alike.  Nearby, on the same date the Teatro della Versiliana will host a benefit performance for the Meyer Children’s Hospital of Florence starting at 9:30 pm.  The DAP Dance Festival is presenting choreographies interpreted by the MM Contemporary Dance Company, the Zappalà Dance Company and New Drama Dance to the music of Bach and Hendrix.

Back to classical music, Saturday, July 25 is dedicated to the late-romantic period composer Sergei Rachmaninoff. Titled “Rachmaninov Elegy,” the second night will feature Sonata for Cello and Piano and Trio Élégiaque No.2 in D Minor. As one of the most sought-after specialists in Rachmaninoff music worldwide, Ukrainian pianist Alexey Botvinov will be the night’s concert soloist. He has played in performing halls such as Berlin Philharmoniker. Botvinov will share the stage with both Michael Guttmann and Jing Zhao.

On Sunday, July 26, “Schumann vs. Mendelssohn” presents Schumann’s Quartet in E-Flat Major, Op. 47 and Mendelsssohn’s Trio No.2 in C Minor, Op. 66. The concert pianist Vanessa Benelli Mosell has performed with the Jerusalem Symphony Orchestra and the Strasbourg Philharmonic Orchestra. She is praised for her virtuosity, technical brilliance and musical sensitivity. The concert viola soloist Pierre-Henri Xuereb has studied with Walter Trampler, Lilian Fuchs and the Julliard Quartet. He has played in concerts throughout the world in Lincoln Center and Wigmore Hall. Like Mosell, he has played at La Scala Theatre.

For a non-musical interlude, three talks on archeology on the evenings of July 28-30 (9:30 pm) covering subjects as varied as discoveries in the Apuan Alps mountain range of Liguria to the Baghdad museum and food down the ages, is open to the public giardino in the garden of the Sant’Agostino cloister.  Reservations are necessary: 0584.795500 or send an email to istituti.culturali@comune.pietrasanta.lu.it.

Bach to Bach, the concert in partnership with Yehudi Menuhin International Foundation, is set for Thursday night, July 30, featuring the violinist Alessandro Quarta as concert soloist. The concert shifts to the nearby coast in Teatro La Versiliana Marina di Pietrasanta. Alessandro Quarta, the violinist known for his performance with the ballet dancer, Roberto Bolle, will play alongside musicians from Mus-E Italia and the Brussels Chamber Orchestra. Together they will interpret Bach’s centuries-old baroque music through a modern lens.

The Friday night concert on July 31 returns to the Sant’Agostino Cloister. Titled “Tango Gran Tour,” the concert highlights the Argentine tango composer Astor Piazzolla’s the Grand Tango for Cello and Piano, Milonga del Ángel from his Angel Series and his most well-known composition, Adiós Nonino. The accordionist and bandoneon virtuoso Manu Comté will interpret the bandoneon part of Piazzolla’s tango pieces. Prize-winning pianist, composer and improviser Alexander Gurning will play alongside Comté, together with Guttmann and Zhao.

On Saturday, August 1, the crossover artist Alfio Bichi will join forces with the Brussels Chamber Orchestra. In “Vivaldi Variations,” the artists present a trio of Vivaldi’s compositions, including “To Saint Sepulture,” “L’amoroso,” and Concerto for Violin and Cello in C Major RV 508. Violinists Pavel Vernikov, Svetlana Makarova, Michael Guttman and cellist Jing Zhao will play alongside the orchestra. On Sunday, August 2, world-renowned flautist Andrea Griminelli will showcase “Le Cygne” and “Finale” from Saint-Saëns’ The Carnival of the Animals musical suite. C. M. von Weber and Nino Rota’s compositions will also be featured.

Since each concert presents a different theme and repertoire, concert-goers have the option to pick the concert that interests them the most, or to stay in the charming town of Pietrasanta for several nights to get the most out of this annual gathering of world-class musicians. The historical town is not only famous for its vibrant art scenes, but also dotted with old workshops, boutiques, art galleries, and restaurants. For the festival program, go to this link. Tickets are available for purchase here.  (anna li/additional reporting by rosanna cirigliano)

MUSEUM OPENINGS: Many Florence landmarks and museums will be closed for the Ferragosto Italian mid-summer holiday, Augu ...