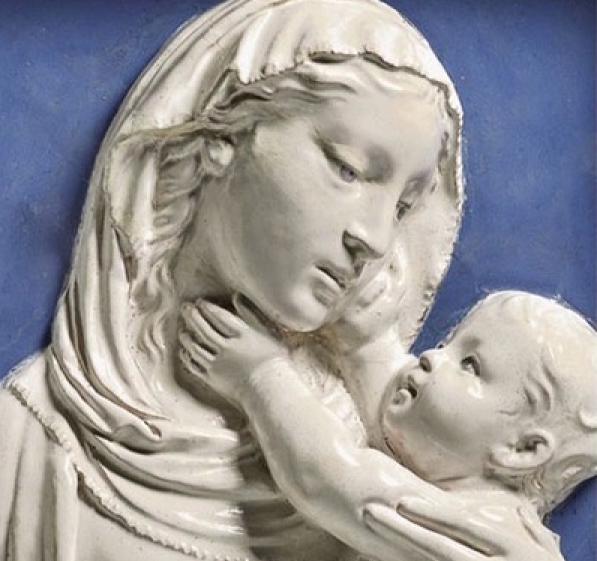 The Tuscan town of Santa Fiora, a village with a population of 2,542 in the province of Grosseto, boasts a collection of Della Robbia terracotta works spread among its churches.  One masterpiece, the “Madonna and Child of Santa Fiora” by Luca Della Robbia, was once proudly owned by Santa Fiora.  Commissioned from the artist by the ruling Sforza family, the tin-glazed terracotta remained in the town for more than 400 years until the suppression of religious orders in 1866 forced the city to sell it.  The work is believed to have been collocated in the church of Santa Chiara until 1867.  Now the village, playing a ‘David’ role, takes on a ‘Goliath’ of billionaire art collectors and wants the work returned.

The glitch in this potential happy ending—on January 28, 2021 the piece was auctioned off by Southeby’s for the amount of $2 million, far above the expected estimate of $700 thousand to a million dollars.  Now Santa Fiora’s young mayor, Federico Balocchi, has made a formal request to the anonymous buyer through Southeby’s for a loan of the village’s former treasure for an exhibition.  In fact, Balocchi would like to raise the funds, appealing to foundations, investors and patrons, to buy the piece.

The well-known Della Robbia family of sculptors and potters created iconic figures in white, to mimic marble, against a heavenly blue background.  Luca Della Robbia, a Florentine and contemporary of Filippo Brunelleschi, also worked with Lorenzo Ghiberti on the famous doors of the Florence Baptistry.  Rarely on the market, in this particular Madonna and Child the Madonna looks lovingly down at the Christ Child, the babe gently caressing his mother’s neck and cheek with a strikingly beseeching expression.

In the same art auction another Florentine artist’s painting, Sandro Botticelli’s “Portrait of a Young Man Holding a Roundrel” sold for an astounding $92 million, also significantly exceeding the estimated price.  The bidding at the auction, which was livestreamed from New York, lasted just 4.5 minutes and drew only two competitors both anonymous and represented by agents.  The painting dates from around 1480 and the subject is believed to be a member of the ruling Medici family, his fingers holding a small painting of a saint.  The sale, the highest price paid for a Renaissance masterpiece since Leonardo da Vinci’s “Salvator Mundi” sold for $450 million in 2017, might be a precursor of the year’s increasing valuation on masterworks.

Visitors flock to the Uffizi Museum in Florence to view the wall-size paintings by Botticelli, “The Birth of Venus” and “The Spring,” but the museum contains at least another 20 works by the artist and his paintings can also be found in the Pitti Palace, the Accademia, the Museum of the Innocenti and the Basilica of Santa Maria Novella.

Works by the Luca della Robbia and his nephew, Andrea della Robbia, can be seen adorning palaces and public spaces in Florence in the Museum of the Innocenti, Orsansanmichele, the Pazzi Chapel of Santa Croce, the Duomo and Santa Maria Novella.  Throughout Tuscany the Della Robbias’ works can be found in the Sansepolcro Civic Museum, the convent in La Verna and the Valdarno among many other sites.  In Pistoia, art lovers can view Giovanni della Robbia’s splendid and recently restored large bas-relief panels representing the seven acts of mercy, found above the loggia of the ancient Ceppo Hospital.

As to the prospects of Santa Fiora’s retrieval of the Della Robbia “Madonna and Child,” the anonymous buyer has remained silent.  Perhaps Dante’s mention of the village in the Divine Comedy (Purgatorio, Canto VI, 111) where he wrote, “You shall see how obscure is Santa Fiore,” was prophetic regarding the town’s loss to the world of billionaire high rollers.

Before Christmas 2020, Santa Fiora, which is located in the area of Monte Amiata, also hit the news for another reason, when it announced a scheme to attract residents billing it as a bid to become the first “smart village” in Italy.  To sweeten the deal the town offers to pay up to 50% of rent to those who choose to move there and work remotely for at least two months.  Santa Fiora, a village of 2500 residents situated on a cliff overlooking the river of the same name, also provides an e-bike service, delivery of meals and the possibility of engaging a local cooperative of babysitters for the small ones.  The deal clincher is the newly installed ultra-high-speed broadband internet.

Santa Fiora prides itself on its rich historical culture and significance.  The property of the powerful Aldobrandeschi family in the middle ages, the town was later taken over by Florentine rule.  Set on the slopes of Monte Amiata, the area has long been a source of mercury extracted from local mines.  The “guest workers” won’t lack for interesting things to do in the town.  Strolling through the walled section of the village, one enters the narrow streets of the Jewish Ghetto, a remnant of the Jews who sought refuge there in the 16th century.  Nearby the Church of Santa Flora and Lucilla, with its collection of Andrea della Robbia ceramic panels, can be visited.  For outdoor enthusiasts, one can explore the hilly terrain on foot, horseback or mountain bike with the possibility of seeing deer, wolves or chamois.

But the town’s chief attraction is La Pescheria (the Fish Pond), a spring-fed lake built by the ruling nobility in the 14th century to insure a ready source of fresh fish for the table.  Today the lake contains huge trout, carp and sturgeon, protected and sustained by flasks of fish pellets sold in vending machines.  The fish jump out of the water, catching the pellets in mid-air, delighting young and old alike.

Santa Fiora welcomed those wishing to work remotely in a less hectic atmosphere with the offer of vouchers paying a portion of rent for the duration of two to six months.  Mayor Federico Balocchi maintains the incentive could particularly appeal to those wishing to alternate life in the big city with spending part of the year in a small village.  Adds Balocchi, “We believe in fact that remote work is not just a temporary solution to deal with the emergency but can represent the future.”  (rita kungel)