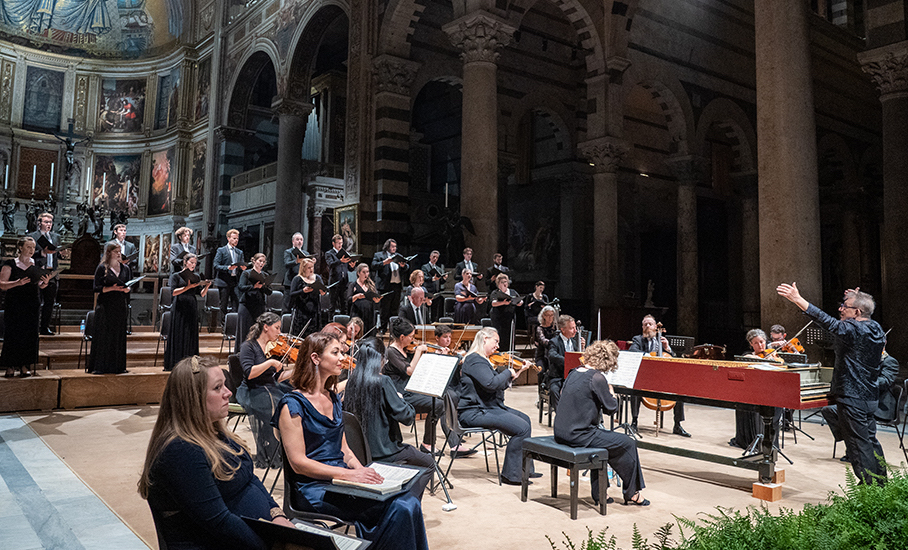 The Opera della Primaziale Pisana is holding its 21st edition of the Anima Mundi Festival. The festival consists of concerts alternately held in the setting of the Cathedral of Pisa and the Camposanto until September 24. A number of well-known musicians, emerging soloists, and some of the most acclaimed Italian and foreign ensembles perform during the festival with a primary focus on sacred or religiously inspired music. Admission to the festival is free, but reservation is mandatory. Each concert starts at 9:30 pm, with the exception of the one that takes place on September 20, which is scheduled at 9 pm.

On September 12, the Camposanto hosts the promising violinist Giuseppe Gibboni and the talented French pianist Ingmar Lazar. The duo are playing “Capricci” and the “Campanella” by Niccolò Paganini, in addition to compositions by Johannes Brahms, Alfred Schnittke, and Henryk Wieniawski.

Back in the Cathedral on September 14, a performance conducted by Trevor Pinnock will be staged with the Haydn Orchestra of Bolzano & Trento and the Continuum vocal ensemble—a quartet of soloists from different countries—presenting two masterpieces: the “Ave Verum” and “Requiem” by Mozart, along with an unfinished work by Franz Joseph Haydn, “Libera me.”

The Camposanto is hosting Vicens Prats, the principal flute player of the Orchestre de Paris, and the harpist Magdalena Hoffmann for a performance on September 16, where they perform pieces from the 18th to 20th century including “Sonata” by Carl Philipp Emanuel Bach, “Andante e Tema” by Gioachino Rossini, and “Suite” by Jean Cras.

On September 18, there is a concert dedicated to Angelica Catalani, who was one of the most famous sopranos of the early 19th century, held in the same venue where there is a magnificent funeral monument by the Florentine sculptor Aristodemo Costoli in her honor. Soprano Sabina von Walther and pianist Maurizio Baglini perform pieces by Franz Liszt, Mozart, Giuseppe Verdi, and Rossini.

Like every year, Anima Mundi has announced its international sacred composition competition, and Paolo Furlani premieres his winning piece “Ave Maria” with a children’s choir in Cathedral on September 20.

The grand finale of the festival takes place on September 24 in the Cathedral, where a milestone in the history of 19th-century Italian music—“Requiem Mass” by Giuseppe Verdi—will be interpreted by the world-renowned conductor Hartmut Haenchen and a quartet of singers.  (Elif Aytemiz)

Tickets can only be booked online at www.vivaticket.it For more information, visit www.opapisa.it