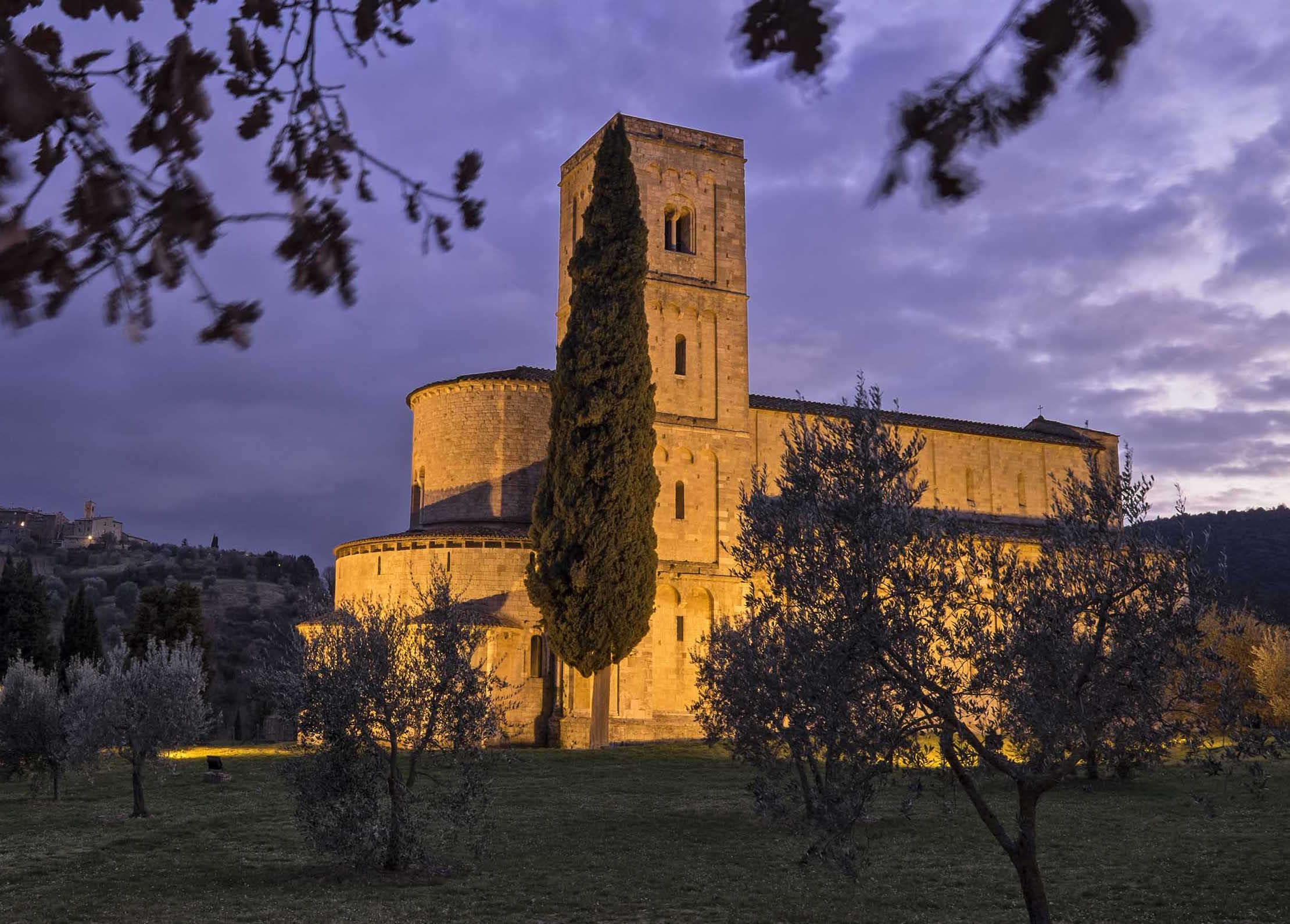 The Abbey of Sant’ Antimo

The Abbey of Sant’Antimo, located in the splendid Val di Starcia, once again opens its doors to worshippers and visitors, in compliance with safety protocols.  The abbey, close to Montalcino and Brunello wine country, is a Romanesque architectural jewel surrounded by rolling hills, olive groves and vineyards in the Siennese countryside.

According to ancient legend, the abbey was founded by Charlemagne in the 8th century on his way back from Rome.  His army, afflicted by a plague-like pestilence, stopped in the valley to pray to God to save them.  Resting and partaking of local herbal remedies restored the king and his men and they continued back to France along the Via Francigena, the pilgrim route from Canterbury to Rome.

The current building, built at the beginning of the 12th century, has been inhabited over the centuries by a community of Benedictine monks who, through prayer, work and obedience have sought God.  Built of travertine stone with outer walls of locally quarried alabaster, light can be reflected on the viewer creating a transcendent and mystical experience.

The Carolingian chapel, now used as a sacristy, remains from the original 8th century building.  Of special interest is the capital depicting the Biblical story of Daniel and the lions’ den.  Carved bas-relief motifs portray Daniel praying between two hungry lions on one side with the opposite side depicting the lions devouring his accusers.  Visitors can also admire two masterpieces of wooden sculpture.  A magnificent wooded crucifix, dating from the late 12th century and carved from a single block of wood, stands on the main altar.  On the right side of the altar stands a statue from the 13th century depicting the Madonna of Sant’Antimo.  Outside one finds the Garden of Saint Hildegarde, known for her belief that health and healing originated from herbs and foods.  Pilgrims often meditate under the large oak tree in the center of the garden, believing it to put one in touch with God.

The monastic pharmacy is also now open, set in the ancient treasure room, where visitors can purchase honey, fruit preserves and cosmetics and herbal teas made from medicinal herbs with centuries-old recipes.  One can also sample the Sant’Antimo beer produced according to an exclusive abbey recipe as well as a bitters made from essence of carlina thistle, an ancient medicinal herb.

Visitors are welcome on weekdays and Saturday from 11 am to 1:30 pm and from 2 to 6 pm.  Holy mass is celebrated Monday through Friday at 5:30 pm.  On Sundays the abbey is open from noon to 6 pm after the mass in Gregorian chant celebrated at 11 am.  (rita kungel)