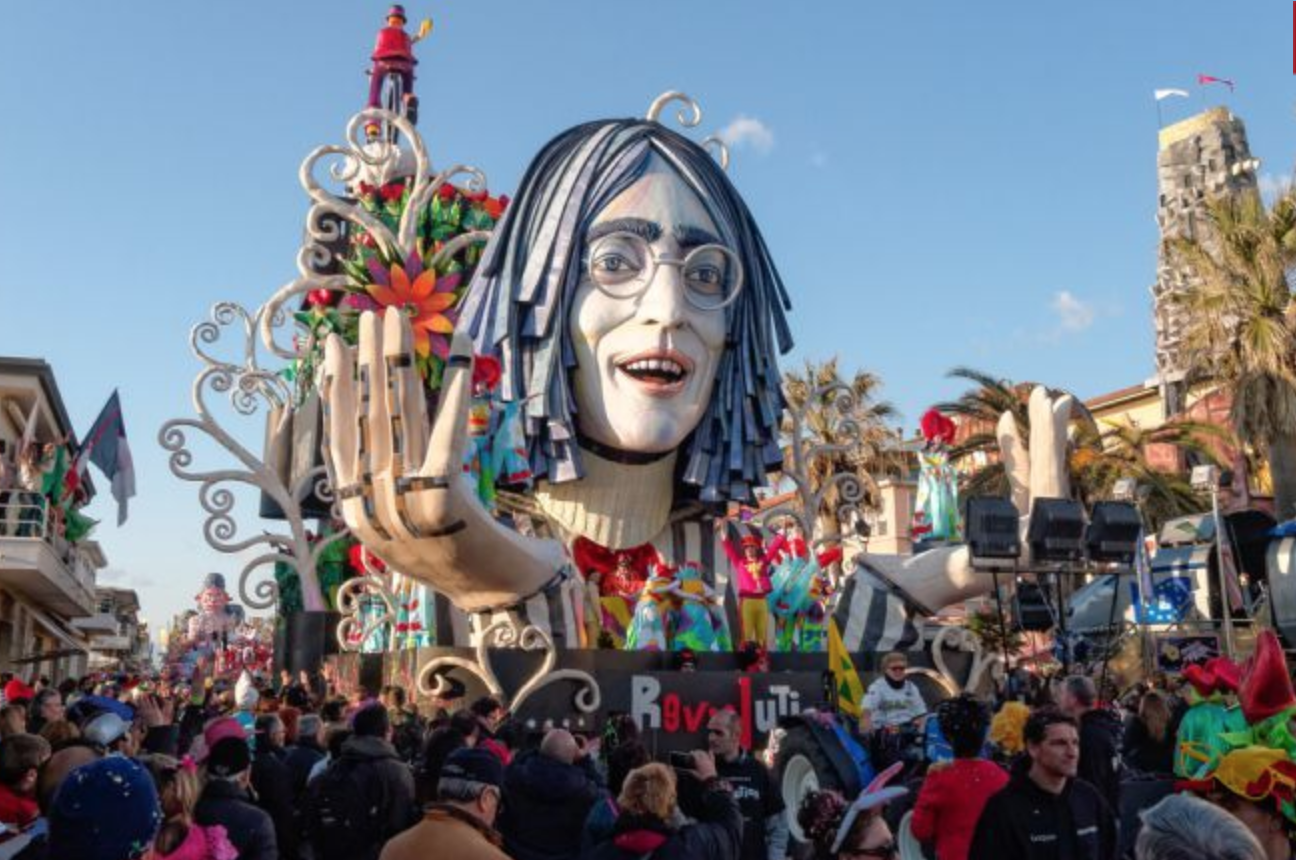 A float at the Viareggio Carnival

Carnival, cancelled in the weeks leading up to Lent 2021, returns to the seaside town of Viareggio. The final parade of the special fall edition will take place on October 9. Due to the pandemic this year is the first time ever the celebrations have been scheduled in early autumn and revelers can once again enjoy the fun and frivolity on the Lungomare, or seaside avenue, of Viareggio.

During the Carnival period, float creators employ satire and imagination to confront the political, economic and cultural issues of the times in Italy and internationally. The participants mock the strengths and weaknesses, vices and virtues of society with creativity and humor. This year the organizers intend the Carnival tradition to signify the restart of cultural life and celebrating in the streets.

Specially honored this year is the late Raffaella Carrà, well known singer, dancer, TV presenter and actress, who passed away in July. During her career Carrà interviewed such illustrious and diverse guests as Henry Kissinger, Stevie Wonder, Ginger Rogers and Sammy Davis, Jr. An international performer she starred in the film Ryan’s Express with Frank Sinatra and performed throughout Europe and Latin America. This year’s theme song, “Chissa Se Va,” honors her memory as the iconic singer of the upbeat tune.

The “Burlamacca d’Oro,” grand prize of Carnival will be awarded to Viareggio native Marcello Lippi, professional soccer player and later the Italian team manager which led them to win the World Cup in 2006.

In conjunction with this fall Carnival, an exhibition of sculptures by Piero Figura and blown Murano glass works by Gianni Seguso can be visited through October 10 at the nearby Villa Paolina, the former residence of Paolina Bonaparte, sister of Napoleon.

Also featured in the 2021 Carnival events, in commemoration of the 700th anniversary of Dante’s death, an exhibition portraying the parallel themes of the Supreme Poet’s stories and Carnival throughout the years comes to Viareggio. Featured are 17 original sketches which depict the timeliness of Dante’s metaphors as related to current events. The show, “Dante and the Divine Comedy in the Satire of the Masters of the Viareggio Carnival” can be seen at the Modern and Contemporary Art Gallery-Lorenzo Viani.

In the almost 150 years’ history of the Viareggio Carnival the allegorical floats have evolved from simple constructions of wood, paper and plaster to sophisticated productions using artistic techniques, new materials and technological skills. This year the floats portray the COVID-19 pandemic, the threats affecting Brazil’s indigenous peoples, the current situation for African Americans and the legacy of Nelson Mandela, among other issues.

Each parade date has a total capacity of 5,000 spectators with tickets for pre-assigned seats. Tickets and seating costs €20 for adults and €15 for children over 1.2 meters in height. Children under 1.2 meters are free. It is required for entrance to have an ID document, a Green Pass and tickets. Masks are mandatory. Spectators with an entrance ticket and seat without a Green Pass must perform a rapid test for COVID-19 in Piazza Mazzini. Hours for testing are on Saturday, October 9 from 11 am to 4 pm. Cost for testing is €15.  (rita kungel)

For complete information and ticket purchase, see the Carnival website.