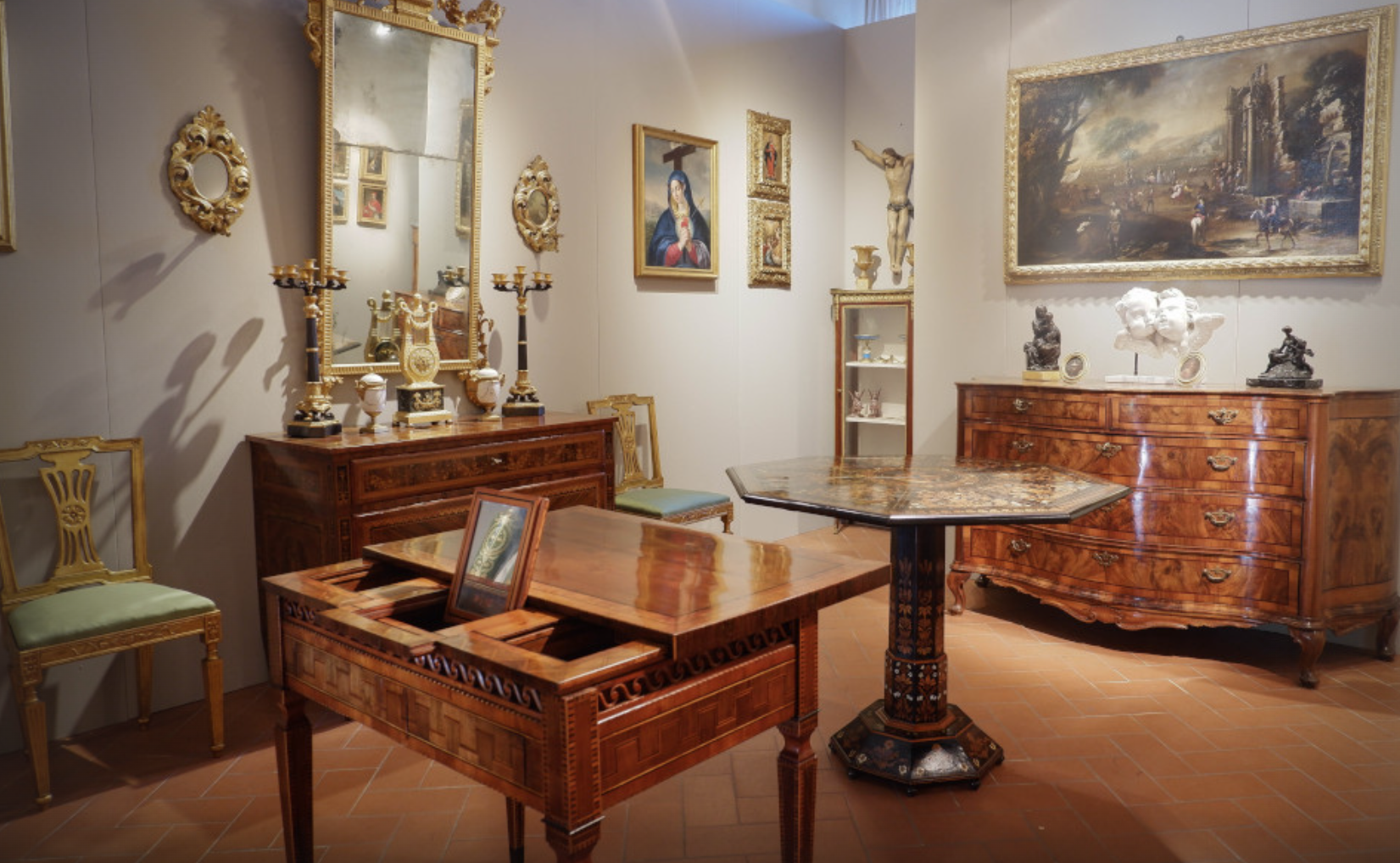 A stand at Cortonantiquaria

Not only for defense did the Etruscans (the forerunners of the modern Tuscans) have the good sense to establish their cities on hills such as Cortona, which is roughly found 1600 ft. or 487 meters in altitude, making it cool and shady for summer events.  Strolling up the town’s steep, medieval streets, guests will find the oldest antique fair in Italy at Cortonantiquaria, obligatory for collectors or those interested in high quality, rare, and valuable antiques.  Cortona itself offers many interesting sites to tour on a day trip or overnight stay facilitating a longer visit.

Cortona rises in three layers: Etruscan, Roman and Medieval.  The Museum of Etruscan Culture (MAEC; admission varies from €10 to €7, a fee comprised in the ticket to Cortonantiquria) is found in piazza Signorelli, and, in addition to art from the 12th to the 20th centuries, contains an archeological collection comprising Etruscan and Roman statuettes and a 4th century B.C. Etruscan bronze chandelier.  A mirror reveals containers for oil, while the underside is decorated with the head of the Medusa and mythical Sirens.  The chandelier probably cast light on Etruscan women wearing gold jewelry.  The pieces, found in tombs at the bottom of the Cortona hillside, are admirable for their intricacy of beautifully-crafted design and detail.

Cortonantiquaria, Italy’s longest-running antique fair returns to the walled hill town overlooking the Chiana valley, was also the home of Renaissance artists Luca Signorelli and Pietro da Cortona. The event integrates history, art, and craftsmanship from Italy and abroad at the Sant’Agostino Convention Center, testifying to a variety of tastes, periods, trends, and creative paths.

In its 60th edition today, the fair offers visitors a rich itinerary featuring creations from the 16th century to the early decades of the 20th century. Thanks to the participation of an ever-increasing number of dealers, high-quality antiques including paintings, sculptures, furniture, silver pieces, jewelry, and vintage fabrics will be on display and for sale. Among the exhibits featured in this edition are some wooden figurines with movable arms from central Italy dating back to the mid-eighteenth century; antique Chinese vases; an 18th-century desk from Piedmont; an early 18th-century Florentine terracotta work depicting St. John and many other works.

The fair also comprises the collateral exhibition “A Journey into Futurism: from Boccioni to Depero.” The show is set up in the foyer of the historic Teatro Signorelli and showcases works from private collections, with a surprise exhibit: a painting by D’Anna recently acquired by LeoGalleries and on display to the public for the first time.

“A Journey into Futurism,” curated by Simona Bartolena, is a tribute to the Futurist art movement in the town that gave birth to one of the leading exponents in its initial phase: Gino Severini. Futurism was founded in Italy in the early 20th century. This popular avant-garde ideal tried to express the energy and values of the machine age by championing the concepts of speed, power and force and in turn was seen to oppose traditional artistic conventions.Through a selection of little-seen works on loan from private collections, the show focuses on some important aspects of the movement founded by Filippo Tommaso Marinetti, in its various periods: from its beginnings, with a work by Umberto Boccioni which still shows the legacy of the nineteenth century figurative style, up to its later developments, with some masterpieces created by Futurist artists such as Giacomo Balla.

Special tour packages are available for visitors, including the MAEC Museum, where the exhibition “Del Barocco Ingegno. Pietro da Cortona and the 17th and 18th-century Architectural Drawings from the Gnerucci collection ” is currently being held. There is a possibility to get reduced tickets for travelers and tourists who arrive in Cortona with regional trains by Trenitalia, Intercity, and Frecciarossa.

Sunday, August 28: Cortonantiquaria Award 2022 given to Elisabetta Belloni for her distinguished career in foreign affairs, diplomacy and security at Piazza Signorelli at 9:15 pm (free admission)

Tuesday, August 30: Journey of a Poet: concert by the Fossati Project Band at Piazza Signorelli at 9 pm (free admission)