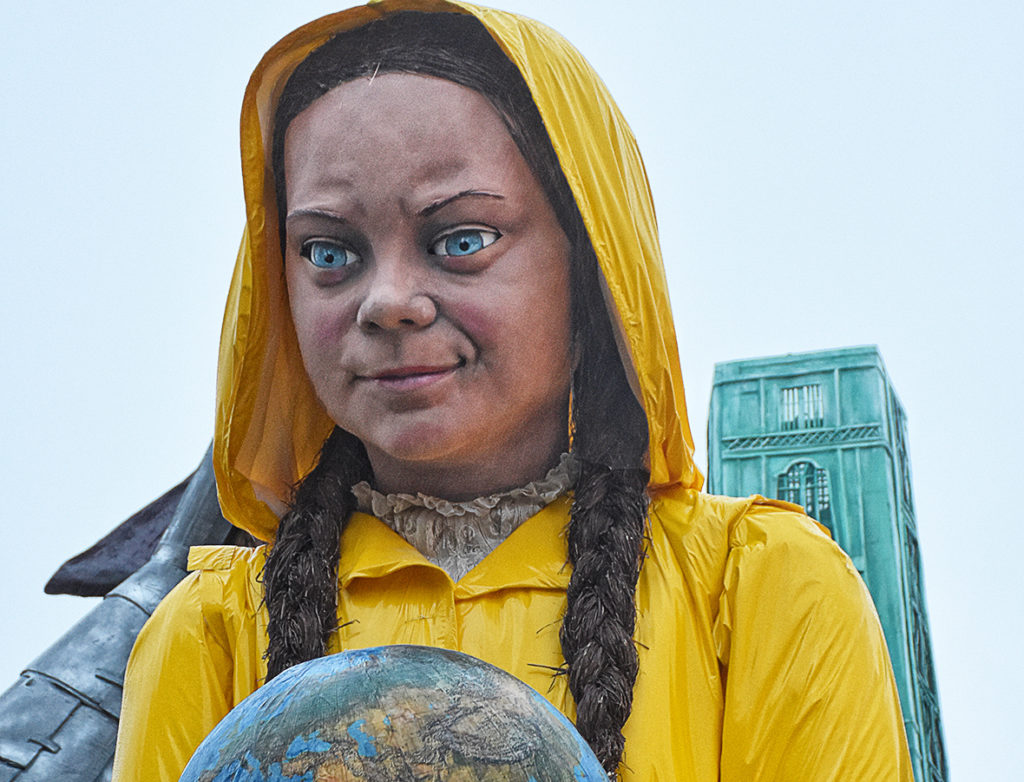 Greta Thunberg as Dorothy in the ‘Home Sweet Home’ float

Music, masks, food and floats! Parallel to the sea, Viareggio is where the Tuscan carnival is held annually and is just an hour and a half away from the city of Florence. This spectacular event filled with culture and tradition is a showcase for floats that are presented to look back on significant issues that occurred within the last year. In the past, the floats were based around politics, but now the Viareggio carnival seems to be shifting a focus towards the environment and social issues. This year’s theme is “Generations,” also highlights the social media craze that has been growing around the globe.

The Viareggio carnival is also a competition for the floats, with each seeking to be the best in their respective size categories and win the overall prize. All floats (carri) in the parade give a satirical visual representation on a theme and are entirely handmade. Skilled attention to detail are not lost in the craft, with some of the largest floats towering at 65 feet or 20 meters over the crowds and weighing about 40 tons. These remarkable works of pop art, entirely of paper-mâché, are pulled by concealed tractors. Teams of men and women inside each work the multiple moving parts manually, pushing and manipulating an arrangement of ropes, pulleys and levers. The carri are in constant motion against the backdrop of the beach, rendering the scene out of a Fellini film.  Each is a year in the making, designed to compete with one another as the performers dance and sing on and around them.

Local neighborhoods will host parties that will start after each parade. The festivities will include food and entertainment provided by traditional musical bands and performers competing for the award of the most original masks and costumes.

Mardi Gras will bring Carnival to an end with a grand finale, featuring a presentation of the winning floats chosen by the public and a jury in their respective categories, capped off by a fantastic show of fireworks.

Floats interpret their concerns on contemporary society based on the general theme. One of the floats is titled “In Wonderland” and shows concerns about the social media mania, a world full of likes and posts, not a world we want to live in because it takes away from face-to-face confrontation. Social media perceives an outlet for one’s ego that is fed by “fake reality.” Another unique entry is called “Grande Balzo,” featuring a tiger robot that carries a symbol of China. The aggressive tiger is meant to appear as threatening to international trade and North American commerce, which is represented by a rust belt factory in the background.

A float that is familiar to many of us is titled “Home Sweet Home” that is a twist on the Wizard of Oz and represents Greta Thunberg as our Dorothy. Water is rising in the foreground to her knees, which represents the environmental concerns in the world and sends a message that home is going past no return. The float becomes an allegory and is a wakeup call towards humanity. The float titled “Ole” brings attention to the terrible and cruel traditions of bullfighting in Spain. The bull and toreador are switching roles with one another, giving the bull the upper hand in the fight showing that there is nothing traditional and ethical about it.

In addition to the parades, which take place along a 1.2-mile ring set aside Viareggio’s boardwalk, best known as La Passeggiata, guests can visit la Cittadella is a nearby carnival museum in the city of Viareggio. It is the final home of floats that were created for the festival as well as their sketches and is the largest Italian center dedicated to the art of mask-making. It houses 16 large hangars and workshops where the giant floats are built, a work zone where the art of paper-mâché is taught and created, and a historical photo and film archive and documentation center. A must-see for visitors wanting to learn more about the tradition of carnival and the work behind some of the best creations from the past. Displays include the first wooden floats that were designed by sculptors and constructed in the naval ship yard by carpenters. In 1925 the floats were beginning to be made with paper-mâché, and in 2001, hangers were built to contain the creations. A tour represents an excellent experience for those who appreciate the tradition of work behind the carnival. (tessa cervantes-roth)