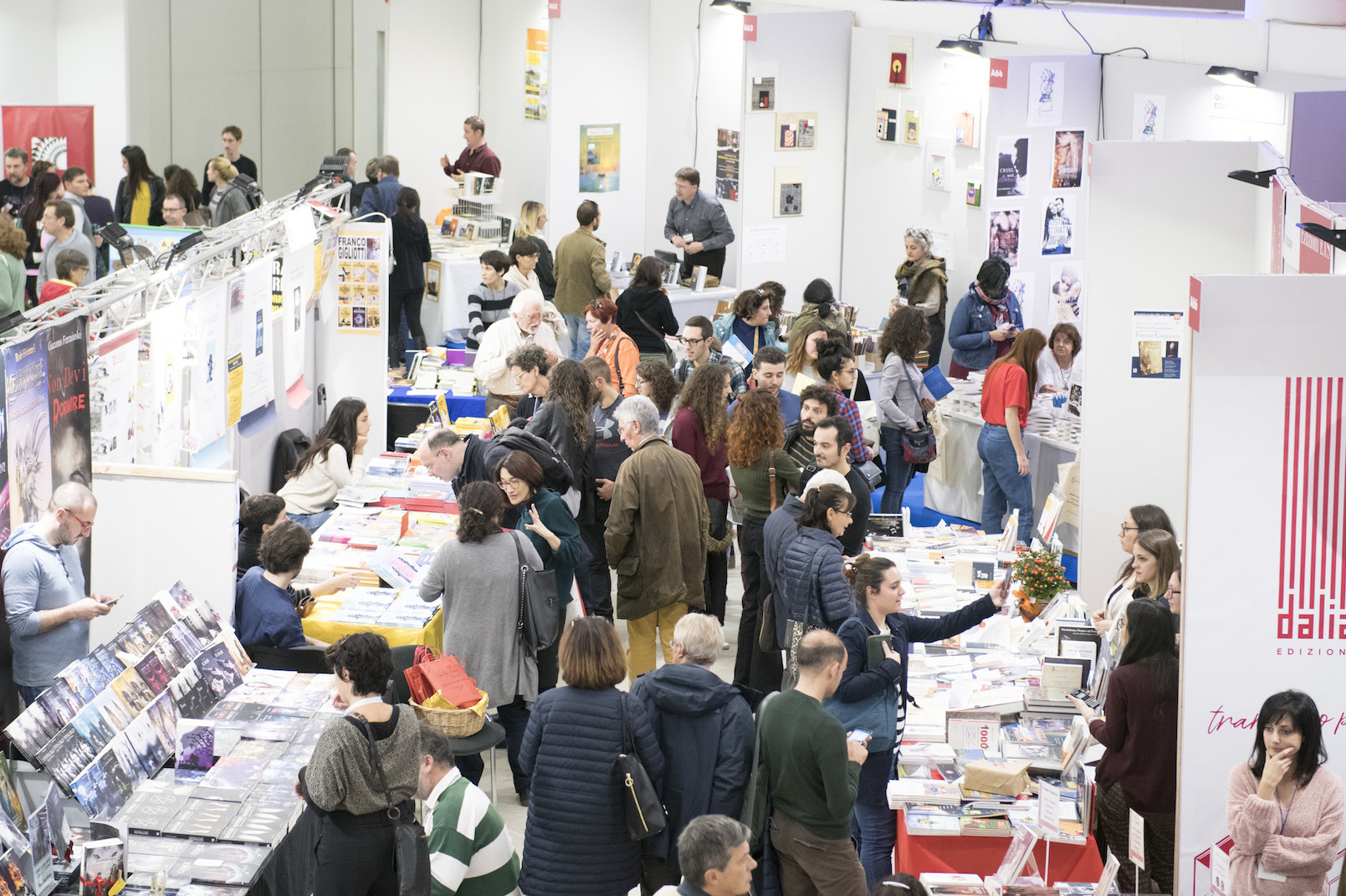 A view of the stands at the Pisa Book Festival

There is no doubt that the notes of the “Anthem of Europe” will resound during the 2019 Pisa Book Festival.  The music, based on “Ode to Joy” from the final movement of Beethoven’s 9th Symphony, would emphasize that, for the first time ever, rather than a single nation, the entire continent of Europe will be the guest of honor at the upcoming 17th edition.

November 7 – 10: 2019 PISA BOOK FESTIVAL.  Palazzo dei Congressi, Pisa.  Open daily 3 to 8 pm.  Admission € 6 on Friday, Saturday and Sunday, free on Thursday.  Free entrance for under 18 and the disabled. Reduced admission available for University of Pisa students and possessors of a Trenitalia ticket for the festival’s dates.  Special offer for the three days € 9.  Tickets can be purchased at the door, or online.

Under the creative direction of the director and festival founder Lucia della Porta, 160 independent publishers and over 200 events such as seminars, meetings and book presentations, will go on stage in the breathtaking setting of Pisa, the Tuscan city overlooking the Arno where poets Shelley and Byron resided during their stay in Italy.

The existence of a European identity has long been debated. However, in addition to a historical, geographical and cultural affinity between European states, a sharing of values and ideas has been developed from the second half of the 20th century.  Despite the winds of Brexit and the populism of recent years, the awareness of Europe as a “cultural community,” to use the words of the EU chief Donald Tusk, has never been in crisis.  In the name of this collective identity this year’s Pisa Book Festival will be exploring the richness of the cultural and linguistic heritage of the countries of the Old World through a literary journey.

Events in the English include the return of the Irish best-selling author Catherine Dunne, who will present her most recent novel “The Way the Light Falls” with a double appointment (Nov. 9, 11 am at the Arena Pacinotti, same day, 6 pm at the Arena Fermi).  The art of embroidery will be the protagonist of a meeting with Scottish writer Clare Hunter, who will talk about her first novel, “Threads of Life” (Arena Pacinotti, Nov. 9, 3 pm).  In an extraordinary event at the Arena Fermi, Nobel Prize winning physicist Barry Clark Barish from the U.S. will be giving a keynote speech on gravitational waves on the November 8 at 7 pm.

The Arena Pacinotti will be the setting for a new partnership of the Pisa Book Festival with the Boswell Book festival, dedicated to the genre of biography and memoir in honor of James Boswell, the Scottish biographer best known for “The Life of Samuel Johnson.”  Founders Caroline and John Knox will discuss “An Account of Corsica” by Boswell on November 8 at 4 pm.  James Knox will also host the British historians Adam Zamoyski, author of the biography “Napoleon, The Man behind the Myth” (Nov. 9, 4 pm) and Matthew Sturgis, author of “Oscar, A Life” about Oscar Wilde and his work (Nov. 10, 3 pm).

The central themes of the 17th edition will be the symbiotic link of identity and memory.  On the 30th anniversary of the fall of the Berlin Wall, symbol of the collapse of dictatorships, a special focus on Eastern European literature will shed some light on the life before and after the regimes.  The Ukrainian novelist Andrei Kurkov will be discussing his bestseller “Death and the Penguin,” set at the time of the dissolution of the Soviet Union (Nov. 10, 4 pm, Arena Pacinotti).  From Belgrade in Serbia Dragan Veliki? will present “Bonavia” on the former Yugoslavian diaspora after the Balkan wars of the 90s (Nov. 9, 5 pm, Arena Fermi) and the Albanian Artur Spanjolli will speak about his novel “Preludio d’autunno” (Nov. 9, 11 am, Arena Fermi). A special section will be dedicated to Portugal and Romania.  The Romanian novelists Radu Pavel Gheo, Eugen Uricaru and Claudiu Florian will talk on the dark years of the Ceausescu’s dictatorship (Arena Fermi, Sat. 10, 11 am). Other guests at the Arena Fermi are Almeida Faria, representative of the contemporary Portuguese literature (Fri. 8, 5 pm) and the East Timorese Luís Cardoso (Sat. 9, 4 pm).

The 2019 Pisa Book Festival will host some of the most relevant contemporary Italian authors.  Among the many, the crime writer Marco Malvaldi, known for the BarLume books adapted into a TV series, will open the festival with the inaugural speech “Perché scrivo” (Why I Write) on Nov. 7 at 4 pm (Arena Pacinotti).  At the same location Sandro Veronesi, winner of the 2006 Strega Prize, the most prestigious Italian literary award, will talk about his novel “Il Colibrì” (The Hummingbird) on Nov. 9 at 2 pm and on Sunday the 10th at 3 pm the mystery writer Marco Vichi will present his new novel of the Inspector Bordelli series set in 1960s Florence.

The daily newspaper La Repubblica is the media partner of the Pisa Book Festival.  Meetings and conversations will be held by journalists and editors Laura Montanari, Fabio Galati and Gianluca Monastra in the literary café set up in the Palazzo dei Congressi.  A journalism workshop (Nov. 8, 12 noon) and interesting discussions with prestigious guests, including Manuel Vilas, one of Spain’s most acclaimed poets and writers, will highlight this edition.

A special art exhibition in Palazzo Blu in Pisa will show the evocative illustrations of the Italian graphic designer Vincenzo Del Vecchio, taken from the book “Terraneo” that he wrote with Marino Amodio.  Fifteen vibrant illustrations done in colored Indian ink will be on display on the ground floor from November 7 to February 9, 2020 (inauguration Nov. 6, 6:30 pm).

Check out the complete program of the Pisa Book Festival on the website. (celeste giampietro collins)