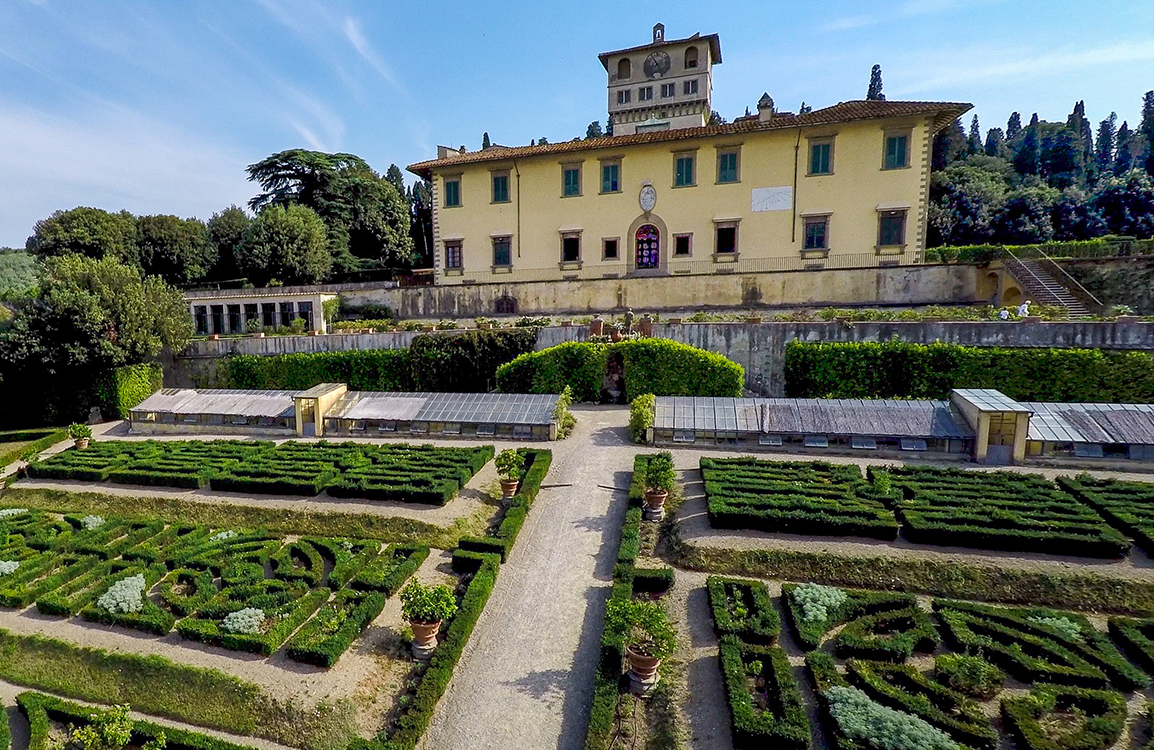 One of the concert venues is Villa La Petraia, a country manor in the outskirts of Florence known for its panoramic terrace and formal Italian garden.

The popular musical series “Villas and Enchanted Gardens” with the Orchestra della Toscana returns to Tuscany in June and July.  Concerts performed in the gardens of the Medici villas, all World Heritage Sites, offer music lovers selected works of Mozart, Beethoven and Mendelssohn among others.  Set in the splendid Renaissance gardens, audiences can reflect back to the time of the Medici rulers when their villas and palaces were used for artistic, cultural and scientific enlightenment.

On Friday, June 18, organizers plan a program of well-known, now deceased composers, Ennio Morricone and Astor Piazzolla, entitled Compositori in Eterno, or Composers Forever.  Morricone, known for movie soundtracks “The Good, the Bad and the Ugly” and “Cinema Paradiso,” was a composer, conductor and trumpet player.  Italian-Argentine Piazzola specialized in tango rhythms, known for incorporating elements from classical and jazz.  The performance occurs in the villa “La Magia” in Quarrata, purchased by Grand Duke Francesco I de Medici in the 16th century for a vacation home.  Again, on Saturday, July 3, the same program comes to Villa Serravezza.  Located on the slopes of the Apuan Alps near Lucca and commissioned in the 16th century by Cosimo I for a summer residence, the structure also could also serve for defensive military purposes as it was fortified.

The program continues on Saturday, June 19 when Villa Poggio a Caiano hosts conductor Vincenzo Milletari and violinist Clarissa Bevilacqua with the Orchestra of Toscana.  Bevilacqua, winner of the 2020 International Mozart Competition in Salzburg at age 18, plays Mozart’s Concerto #5 for Violin and Orchestra.  The program also includes Mendelssohn’s “The Hebrides” overture and Beethoven’s Symphony #1 Opus 21.  The same program is offered on Tuesday, June 22 at Villa Cerreto Guidi commissioned by Cosimo I de Medici in 1556 and designed by Buontalenti as a hunting residence.

On Tuesday, June 29 Villa Artimino hosts composer Marc Leroy-Calatayud, cellist Miriam Prandi and the orchestra performing Mozart’s Idomeneo K.367, originally composed as ballet music, Tchaikovsky’s Variations on a Rococo Theme and Mozart’s Symphony #35 K.385, known as the “Haffner,” as it was commissioned by the Haffners, a prominent Salzburg family.  The same program will be performed on Wednesday, June 30 at the Villa Cerreto Guidi in the town of the same name and on Thursday, July 1 at the Villa La Petraia, a country manor in the outskirts of Florence known for its panoramic terrace and formal Italian garden.

All performances begin at 9:15 pm with reservations required at a cost of €12.50 which can be purchased at Teatro Verdi Box Office, online on Ticketone.it, in the sales points of the Box Office Circuit, and on the spot before the concert if not sold out in advance.  Exceptions are the two Morricone and Piazzolla concerts (June 18 Quarrata and July 3 Serravazza) which are free with required reservations.  For Quarrata, reservations are made by telephone by calling tel. 0573 774500; for Seravezza the booking is available online at www.eventbrite.it and by phone tel. 055 0681726.  As these special events are booking up quickly, interested music lovers should book tickets as soon as possible.  (rita kungel)

Complete information can be seen on the website www.orchestradellatoscana.it