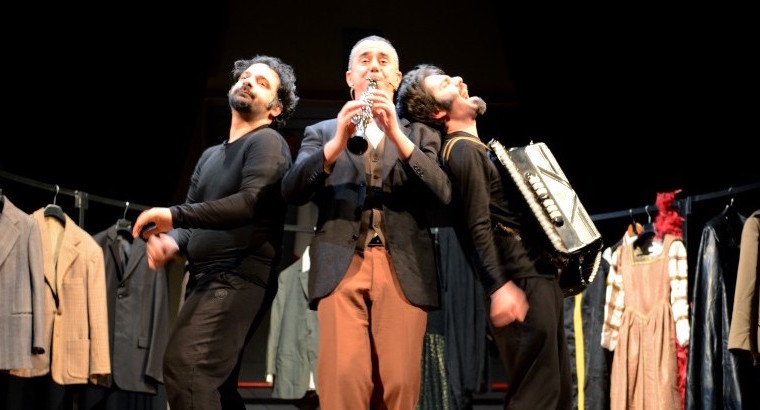 A scene from “My Seven Children”

As Tuscany prepares to celebrate Liberation Day, April 25, the day in 1945 Italy was liberated from occupying German forces and their Fascist allies, many remember the brave efforts of the Italian Resistance Movement.  This year, to mark the occasion, at 3 pm residents are asked to step out on their terraces or front yard and sing “Bella Ciao,” the anthem of the Italian partisans during World War II.

As the order to not to go out and about enters into its second month, artistic organizations strive ever more to provide opportunities for Tuscans to continue to enjoy the rich culture and creativity of the region without leaving their homes.  The Officine della Cultura, based in Arezzo, initiates the second season of music and theatre with the #iorestoacasa (I’ll stay at home) theme inviting viewers to embrace culture on video with repertory shows and a concert.

Beginning Thursday, April 23 through Sunday, April 26, during the week of the 75th anniversary of the victory over Nazi-Fascism, the Officine della Cultura and Teatro di Anghiari present a streamed theatrical performance from the book “My Seven Children” by Alcide Cervi, the father of the seven Cervi brothers.  With Gianni Micheli, Luca Roccia Baldini and Massimiliano Dragoni, the performance is directed by Andrea Merendelli.

The countryside surrounding the city of Reggio Emilia, in the region Emilia-Romagna, was home to many partisans including the Cervi family.  Seven Cervi brothers, raised in a strong anti-fascist, Catholic family, printed political pamphlets, encouraged resistance to the Republic of Salò, a Nazi Germany puppet regime, and promoted education and agricultural improvements among the local peasants.  The family also gave refuge to dissidents and fugitives from the regime, including numerous foreigners.

Considered to be enemies by the Fascist National Republican Guard, on November 25, 1943 their farmhouse was surrounded and set on fire with 23 inside, including five women and 10 children.  The seven brothers, Gelindo, Antenore, Aldo, Ferdinando, Agostino, Ovidio and Ettore, as well as their father Alcide and Republic of Salò defector Quarto Camurri were imprisoned.   On December 28 the seven brothers and Camurri were executed by a firing squad.  Benito Mussolini was shot and hanged 16 months later, and Italy was liberated by the Allies the following spring.  Remembering these martyrs to social justice and democracy, numerous streets, piazzas and schools throughout Italy are named Cervi.

From Thursday, April 30 to Sunday, May 3 the “Multiethnic Orchestra of Arezzo ” will be on state featuring the singer-songwriter from Calabria Dario Brunori on stage with Simona Marrazzo (vocals) and Lucia Sagretti (violin) performing the original arrangement of some of the most famous pieces of the platinum album from soundtrack of the film “A Casa Tutti Bene.”

The Officine della Cultura also sponsors the Verdi Theater of Monte San Savino, screening performances in the next three weeks on ArezzoTV, channel 214 of digital terrestrial television every Saturday evening.

During these times of seclusion, the gift of the arts provides one concrete form of hope while waiting for the return of live performances and the special social relationship that comes with them.  (rita kungel)