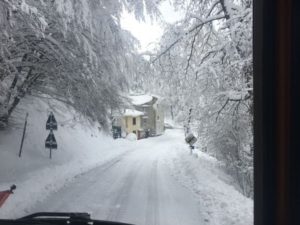 Preceding the freezing temperatures forecast in Tuscany for the last week in February, snowplows were in service clearing the roads throughout the Mugello Valley (including Marradi and Palazzuolo su Senio), the Val di Sieve as well as around villages in the Casentino and hilltop towns near Arezzo. Visibility has often been limited on the roads full of snow.

Plows have also been employed to clean train tracks which are also being heated in various stations throughout Tuscany.  In face of the cold spell, a shelter to host homeless men and women at night is being opened in Pistoia.