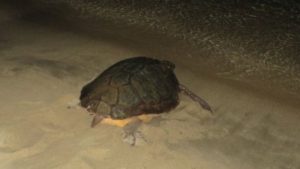 Last week an exceptional event took place on Elba:  the eggs of 50 baby sea turtles hatched and the tiny turtles scrambled to shore and swam out to sea.

The mother, a “carretta carretta” turtle had swum onto a public beach at Marina di Campo on June 20 and laid her eggs in a nest which she had proceeded to create.  The directors of the Elba Aquarium and the Nature Reserve to which Elba belongs were immediately notified, and a long corridor to the sea was roped off to prevent people from coming close to the nest.  On either side are beach clubs with their sun beds and umbrellas.

The situation was constantly monitored.

Elba would be normally too far north for this endangered species to nest, but all went well.  The newborns, proceeded to the water “in orderly fashion as if they were students on a class trip,” said Marianne Ackermann of the environmentalist association Legambiente, who personally counted each one by one.

There was an update on the story in the late morning of August 20: by using a flashlight during a night visit to the nest, it was discovered that more baby turtles have been born, who will join their older brothers and sisters; the official number is 103, an event which a volunteer likened to “the 101 Dalmatians plus two.”

Thirteen eggs have not hatched yet and one embryo did not make it, for a total of 113 eggs that the mother turtle laid in Marina di Campo last June.  To read the latest, visit  La Repubblica.