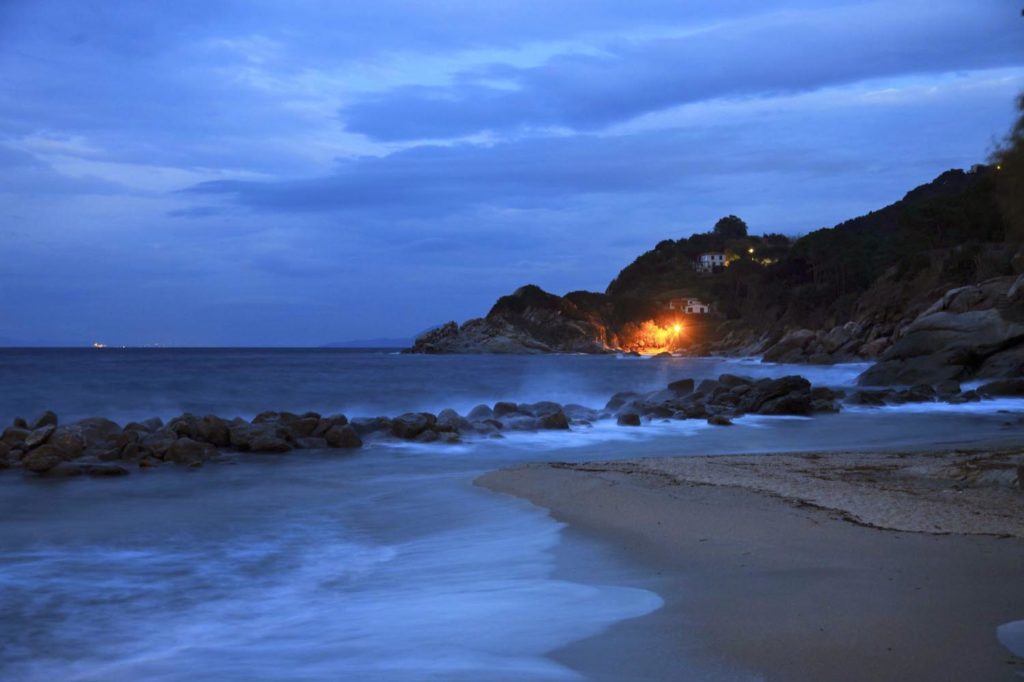 Elba has a beach for everyone—from broad stretches of white sand and small inlets filled with tiny pebbles to hidden coves reached only by descending cliff paths. Protected as part of the Tuscan Archipelago National Park and rich in marine life, the sea here also attracts snorkelers and scuba divers.

On the island’s rugged coastline, more than 70 beaches can be found, not including those accessible only by boat. Some offer full amenities with shoreline restaurants, water sports rentals, changing rooms, loungers and umbrellas for rent. Others provide only sun, sand and the deep blue sea, obliging vacationers to bring their own lunch and chairs.

So pack the beach bag—the only difficult part is deciding where to go.

Visitors who want to be on the beach as soon as possible after disembarking the ferry need go no further than Le Ghiaie, Portoferraio’s ”town beach.” Easy to find, the shore, covered with smooth, white pebbles, lies in front of a public park providing afternoon shade and a playground for children.

This trio of seaside jewels known for its clarity of water lies between Portoferraio and the Enfola headland. Backed by a campground set in the trees, the first beach, Acquaviva, provides food and rental concessions. A footpath leading from the Enfola-Viticcio crossroad accesses La Sorgente and Sansone, but neither has services, so a picnic is in order. La Sorgente can also be reached by a dirt road three miles past Portoferraio. The least crowded of the three, with its crystal clear water and white pebbles framed by steep cliffs, Sansone is a perfect photo op.

Halfway between Portoferraio and Procchio lies almost half a mile of fine, white sand in the Gulf of Biodola. Complete with food concessions, canoe, paddleboat and windsurfer rentals, umbrellas and sun loungers for hire, the bay attracts families. A popular place—for parking and a good spot near the water, go early during the high season.

Named for Napoleon’s sister Pauline, who bathed there often when she visited her exiled brother, this small sandy bay can only be reached by steep steps found on the right side of the road about 1 ½ miles past Procchio. A snack bar and rental umbrellas are available, and the small island of La Paolina facing the beach is easy to swim to.

Further west along the coast on the provincial road between Marciana and Pomonte is a small strip of sand bordered by big rocks on either side that is a perfect environment for both sunbathers and snorkelers. Seaside cafés cater to visitors, and sun loungers, beach umbrellas and pedal boats are for rent. A path carved into the rocks on the right side of the beach leads to tiny Cotoncello with what Italians call scogli—flat, smooth rocks that slope gently toward the water. A small bit of sand between the rocks creates seawater ”swimming pool” with azure clear water. No services are available.

Due to its southern exposure and especially warm water, this crescent of 1,000 feet of fine white sand is especially popular with early and late season swimmers. Cavoli is located on the coastal road three miles west of Marina di Campo.

Driving west from Cavoli, in 15 minutes the sun seeker arrives in Chiessi, where Monte Capanne, Elba’s highest point, slopes down to the sea. The west side of the island, rocky, barren and windswept, claims no white stretches of sand. The pebbly beach, a short walk from the village, is bordered with smooth slabs of granite, superb for sunning.

Popular with surfers for the afternoon wind that rises off the coast, scuba divers also frequent the area to explore the underwater sea cliffs. Visitors with sharp eyes might spot mouflon, wild sheep, grazing on the rocky cliffs above the sea. Introduced to the island in the 1970s, mouflon have adapted very well to the steep terrain and Mediterranean scrub. Parking and eating establishments are adjacent to the beach.

Lying between Marina di Campo and Porto Azzuro are several beaches characterized by white sand and pine forests. Known for its campgrounds, Lacona is a popular spot for families with children because the beach slopes very gradually into the crystal clear water. Lacona Beach offers a sailing club and numerous cafés; pedal boats, rubber dinghies and windsurfers can be rented.

Laconella, Lacona’s little sister next door, offers no amenities, but provides a tranquil setting. Following the road from Lacona to Marina di Campo, look for a sign for Camping Laconella and turn left. Nearby rocks are ideal for snorkeling and viewing a variety of fish.

Driving from Lacona towards Porto Azzurro, after nearly four miles, one discovers Norsi with its panorama of the sea and the village of Capoliveri above. Nestled in the Gulf of Stella, this stretch of tiny pebbles entices those who desire a peaceful place. Nearby rocks offer good snorkeling, and a thatched hut bar sells food and drink. On a very clear day, one can see the island of Montecristo in the distance. Paragliders flying over the shoreline can often be glimpsed in the afternoon.

Nearby Norsi toward Capoliveri, look for signs and a right turn for Barabarca. From the pay parking lot, a path leads down to a small cove sheltered from the wind and filled with mixed sand and tiny stones. The west-facing beach makes a fabulous spot for watching the sunset.

This sampling of Elba’s varied beach locales can only tempt landlubbers to visit and enjoy the Tuscan Archipelago National Park. The largest marine park in the Mediterranean, it protects more than 140,000 acres of sea and 44,000 acres of land in the archipelago. To discover some of Elba’s hidden coves, bays and inlets, consider exploring its 91 miles of coastline in a sea kayak or sailboat. For an even ”deeper” knowledge of the island and its sea, arrange a diving excursion. (rita kungel)