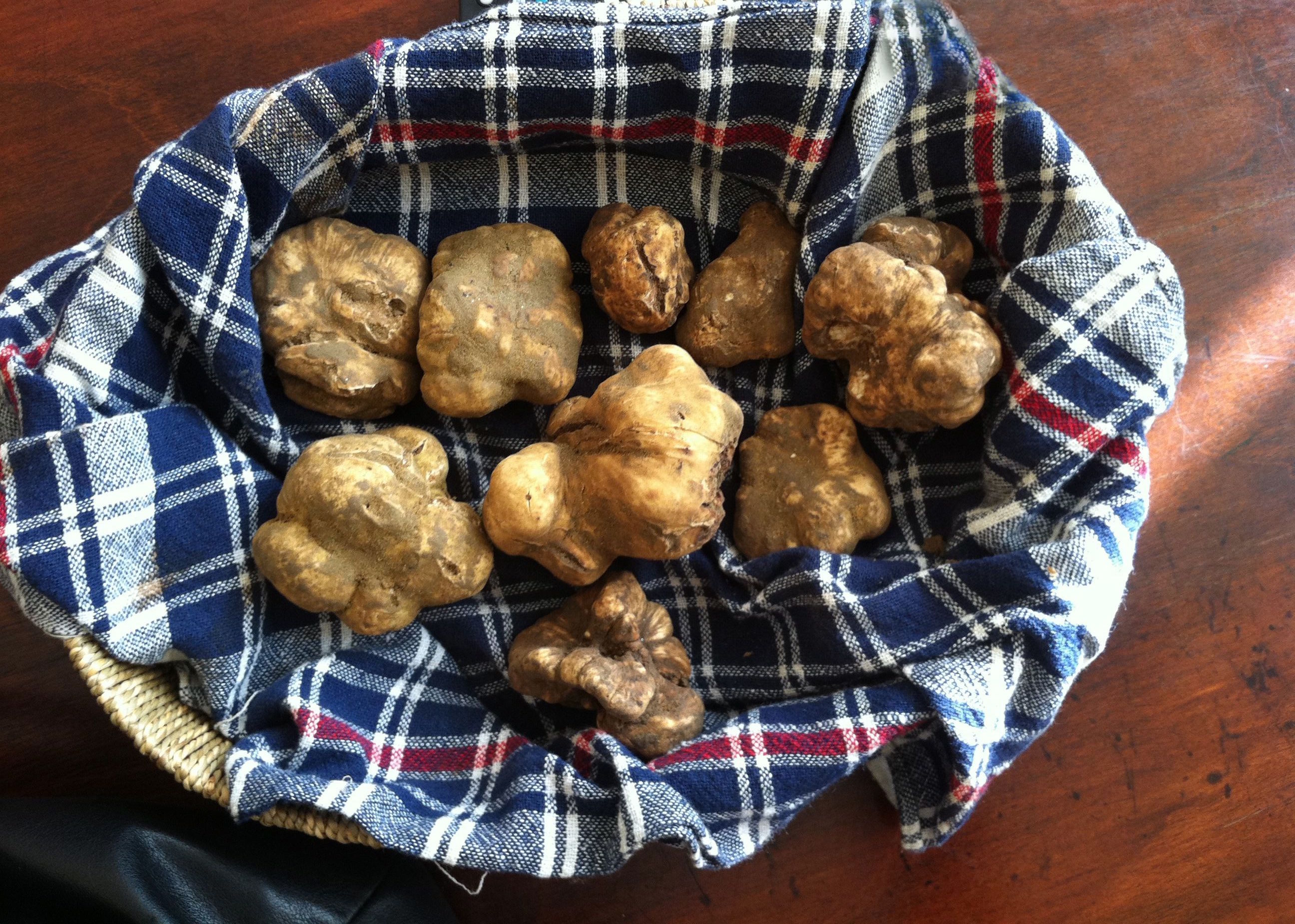 A basket of truffles found in the hills surrounding San Miniato

November 13-14, 20-21 and 27-28: 50th ANNUAL WHITE TRUFFLE FESTIVAL.  San Miniato.  Hours: 10 am to 6 pm. Free admission. Shuttle buses from Via Fontevivo (Palazzetto dello Sport) for line one and Via Pestalozzi (PAM Supermarket) for line two. Line one will transport visitors on both Saturday and Sunday, while line two only brings people to the festival on Sunday. Saturday transit will take place from 10 am to 11:30 pm, with a course completing every 30 minutes. Sunday will have a bus carrying attendees to the fair from 9 am to 2:30 pm every 25 minutes, from 2:30 to 8:10 pm every 15 minutes and then from 8:10 to 11:30 pm every 30 minutes to the festival in San Miniato Alto, the oldest part of the town perched on a hilltop.

San Miniato attracts tourists and locals alike seeking culinary gold, the white truffle.  They wander through the winding streets with displays of locally-sourced truffles, wine and cured cold cuts at select locations. Pecorino sheep cheese with truffles, truffle infused oil, jars of preserved truffles, truffle slicers and cookbooks featuring the prized item are on sale, in addition to wholesale food ingredients and specialities displayed and sold by producers from over Italy. The heady scent permeates the atmosphere where sellers and truffle hunters, called tartufai, display the tubers in sizes from garbanzo beans to apples, their scales waiting to weigh them for potential buyers.  Local restaurants offer thin shavings of truffles as the main attraction to food with simple flavors: tagliolini pasta, risotto, scrambled eggs or carpaccio of raw beef.

During these three weeks, seven locations in the town will celebrate the truffle in addition to Italy’s other culinary stars. The venues include Piazza Santa Croce, Corso Garibaldi, Piazza del Popolo, Loggiato di San Domenico, Loggetta del Fondo, Piazza della Repubblica and Piazza Duomo. These spots in the city will offer market stands, food and wine tastings, along with more information on the festival happenings in San Miniato.

The fair provides a unique opportunity to learn about and savor the “diamond of the earth” historically believed to have aphrodisiac powers and prized by chefs throughout history.  Related to mushrooms, truffles, the fruit of an underground fungus, have a symbiotic relationship with oak, chestnut and hazelnut trees.

For its 50th anniversary, the San Miniato Truffle Festival wishes to showcase the women in the food industry. The president of the San Miniato Promotion Foundation, Mario Gabbanini, said that “women have achieved many prestigious goals in diverse fields. For this reason, the fair is showcasing female chefs and women will be leading many of this year’s events.” Simone Giglioni, the mayor of San Miniato, went on to say that this fair “the return of the festival represents the first step in a slow but gradual return to normalcy during the era of Covid.”

The inauguration is scheduled for November 13 at 10 am, which will lead to a historical procession at 11 am that includes a parade in the city streets, ending with the cutting of a ribbon at 11:30 am in Piazza del Duomo. Present will be four important figures in the world of truffles, which include Alessandra Petrucci, professor at the University of Florence; Barbara Nappini, president of Slow Food Italia; Antonella Brancadoro, director of Città del Tartufo (a national association of truffle towns); and Cristiana Cella, a journalist who previously documented Afghan women and advocated for their rights. A truffle workshop will open at 3 pm with a speech from president Brancadoro and a cooking show by chefs Raffaella Cecchelli and Shamira Gatta.

The festival will continue with discussions, cooking demonstrations and book premieres on each weekend for the rest of November. In order to gather and view these shows, a Green Pass (or your country’s equivalent) will need to be presented in order to gain entry.

The area surrounding the town of San Miniato al Tedesco (province of Pisa) produces 25% of Italy’s tuber magnatum pico or white truffle. Every Saturday and Sunday there will also be guided visits to landmarks in these locations, including the city tower (Rocca di Federico II) of San Miniato, commissioned by the Holy Roman Emperor of the same name. San Miniato is also known for hold the record for the largest truffle – weighing in close to five lbs. – ever found.

For more details visit www.sanminiatopromozione.it and www.truffleintuscany.com for more information on Massimo Cucchiara, a certified truffle hunter, as well as the background of the event itself.  The organizers suggest bringing sporty and comfortable clothing when joining in the truffle hunts, as well as boots in the case of muddy ground from potential rain. (rita kungel & nelson matos)