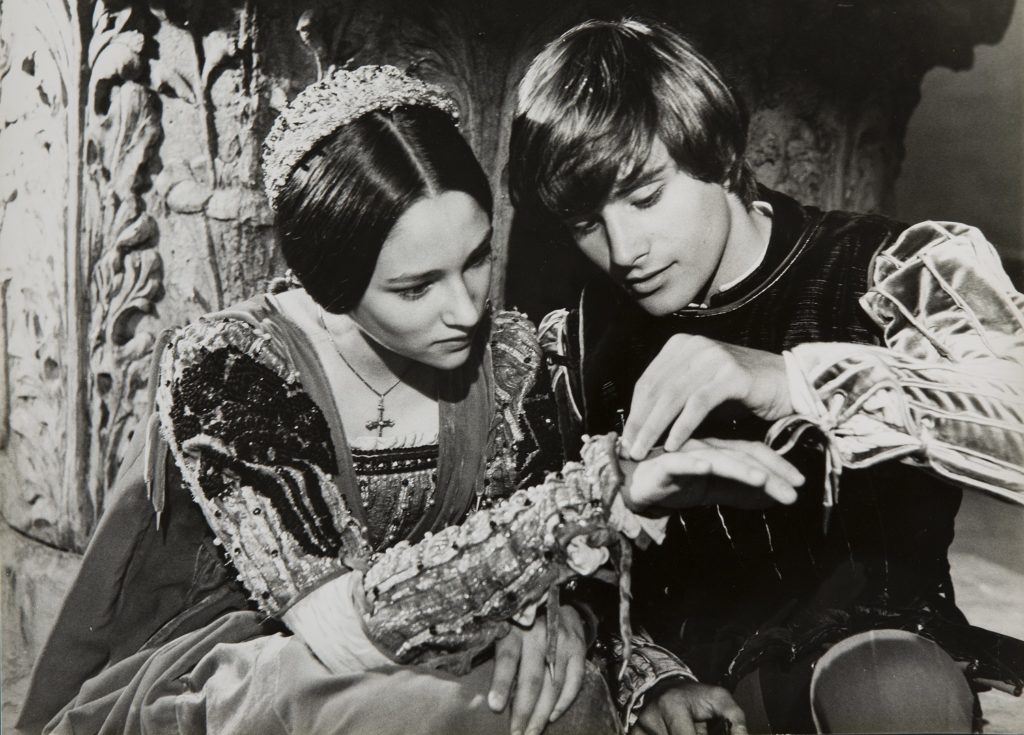 Studded into the Italian hillside – like pearls in the bodice of a silk gown – are the rosy-bricked buildings of Pienza, the real-life “fair Verona” in which filmmaker Franco Zeffirelli set scenes of his 1968 classic, Romeo and Juliet. The film, at the time starring relative-unknowns Leonard Whiting and Olivia Hussey, has since become an iconic cinematic incarnation of Shakespeare’s play, garnering two Oscar wins – Best Cinematography and Best Costume Design – out of its four nominations that season. In particular, it is Danilo Donati’s inspired costume design that retains a surprising notoriety in the public consciousness. It is also thanks to Donati’s work – and the assistance of the embroiderers and seamstresses – that the late-medieval world of Verona resonated with audiences.

Those very audiences have the chance to view Donati’s costumes up close at an exhibition of Franco Zeffirelli memorabilia in Pienza. In celebration of the 50th anniversary of Romeo and Juliet’s release, the Pisa-based Cerratelli Foundation has loaned Pienza’s Palazzo Piccolomini costumes from the film.  The exhibition emphasizes Zeffirelli’s attention to detail and historical integrity in the 1968 production.  Zeffirelli and Donati do just as much storytelling through their cast’s clothing choices as through camera angles and prop symbolism, and it is this that so potently – and effectively – primes the audience for the story to come.

Arranged in the very room of the Capulet mansion – Palazzo Piccolomini – in which the two young lovers are filmed meeting for the first time, the exhibition erases the lines between the fictional and the factual, romance and realism. Zeffirelli’s Verona is romantic and picturesque, melting effortlessly into the Italian countryside, and yet under the town’s cobbled streets ripples a current of sinister isolationism, as if both Verona and her people have been trapped for all eternity within a camera lens. The audience participates in the illusion of the idyllic Renaissance town, at once within and without Shakespeare’s text, and we, like the characters, cannot escape it until the movie ends.

Framed by Pienza’s late gothic Cathedral, Zeffirelli’s imaginary Verona is geometric, divine, immovable, wrapped in high, vaulted walls and littered with chinks of bright sunlight. Like the Yellow Brick Road, Pienza’s main square has patterned sidewalks that lead pedestrians to the center of the town and enclose them within the piazza, an almost too precise metaphor for the film’s “destiny” theme.

Still, despite their deterministic society (and narrative), Zeffirelli’s Romeo and Juliet attempted to exercise what little free will they could in the face of total parental control. Unlike the angelic Claire Danes in the 1996 Luhrmann Romeo + Juliet, Zeffirelli’s heroine is quite adult in contrast. Juliet is clothed in sensual red and gold – symbols of natural cycles, fertility, and womanhood, in high-waisted, chest-hugging gowns.  Her outfits bind her to the vibrant Verona, a daughter of not just the Capulets but also the town itself; for Zeffirelli, it is Juliet, in her search for sexuality and freedom, who we should watch. Yet, by understating her gown at her parents’ ball and surrounding her with an overdressed, pompous high society, Juliet – with her brunette hair pinned up, her makeup minimal – is effortlessly, authentically beautiful.

Romeo, meanwhile, is clad in lilac-and-silver silk and slashed sleeves, the passive recipient of Juliet’s desire. Introduced clutching a fistful of wildflowers, Zeffirelli’s Romeo is sentimental, befitting a romantic hero. His costume at the Capulet ball – laced-up sleeves and vest, silver fox mask, and not-so-subtle eyeliner – suggests a certain powerlessness and duplicity, foreshadowing the rabbit hole down which he is fated to fall.

Inside the Palazzo Piccolomini itself, the reality of Zeffirelli’s film is on full display. The displays are accompanied by the soundtrack, playing songs from the ballroom scene in the background on repeat. Stills from the film and behind-the-scenes shots – courtesy of the Zeffirelli Foundation – line the walls, all but overwhelming the senses. Combined with the physical presence of the exhibition’s centerpieces – the costumes – mounted on mannequins, visitors are transported into a world that is not their own, surrounded by the sounds, smells, and clothing of the early-Renaissance Italy. Juliet’s velvet gown trails the floor; Romeo’s striped silk sleeves catch the light; Tybalt’s ridiculous red hat entirely engulfs the head of its dummy; the visceral effect of the exhibition almost has one curtseying to the bejeweled Capulets.

The chance to see, up close, the craftsmanship and deliberation of each piece of Donati apparel is one that any cinephile or, indeed, casual moviegoer will appreciate.

The Palazzo Piccolomini show is a heartfelt, worthy tribute to a dynastic director and a timeless literary masterpiece.  (claire francis)