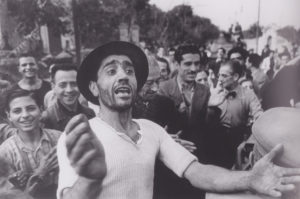 Photojournalism is a calling; it’s an obsession and thirst for the clearest image of truth. Robert Capa faithfully followed that calling, creating some of the most esteemed war visuals in history.  His legendary photos from Italy during World War II are now on view at San Gimignano’s Modern and Contemporary Art Gallery through July 10. The exhibition of 78 pictures from the Master Selection series follows the LIFE photographer’s time on assignment in Italy with American soldiers.

In 1943, Capa spent July and August of that year in Sicily, where most of the photos in this exhibition were taken. There, he covered the Battle of Troina.  German forces repelled an advance by the American army and retaliated with a violent attack against them. The campaign Capa photographed in southern Sicily was eventually successful, and Germans left in early August.

Robert Capa knew how to capture chilling emotion with attention to striking detail; he entered a space and saw, almost instinctively, where the truest story was.  One could sense from his photos his passion for humanizing war, having covered five throughout his career.  His subjects were characters, none of one sort, none of one mind, all with their own stories that seamlessly interlace with those of struggle.

Every small, simple detail of the Alinari exhibition reflects the photojournalist’s eye for the vulnerable side of war.  Much of his work covers the intimate, quiet moments that fill the space between battles and bomb blasts. In one photo, a fatigued teenage boy waits sandwiched between two elderly Neapolitan citizens in a line for water.  In another, a small group of soldiers share a meal under the protective watch of an angelic statue at the Maria Santissima Assunta cathedral in Troina.  In yet another, a stoic Italian peers into Capa’s lens as he carries an injured girl in his arms and a cigarette in his lips, a weary-eyed woman watches from the shadows behind.

Capa is the narrator of this retrospective as not only his photos are on display, but also his words, printed in Italian and English.  Brief personal descriptions of his travels share chilling backstories for each new exhibit.  Most are Capa’s written impressions of the gritty realities behind his iconic photographs.

After the Allies landed in Naples, they began to move north to   Rome to confront German powers and begin what would later be called the Battle of Monte Cassino. Before they got there though, Capa’s treacherous travels led him to reflect again on his commitment of his profession: “…The newspapermen were not allowed, not yet willing, to write the whole truth…Here was the time for me to use my camera and like it.”

Like this showcase, Capa’s photos pulled the world closer to the frontlines than most journalists at the time dared to go. He reminded those living far away from the battlegrounds that behind the guns, uniforms, and façade of political strife, there were genuine people experiencing candid moments of fear and joy, of pain, celebration, and even boredom.  So is every second in history when his shutter clicked. (marilyn malara)