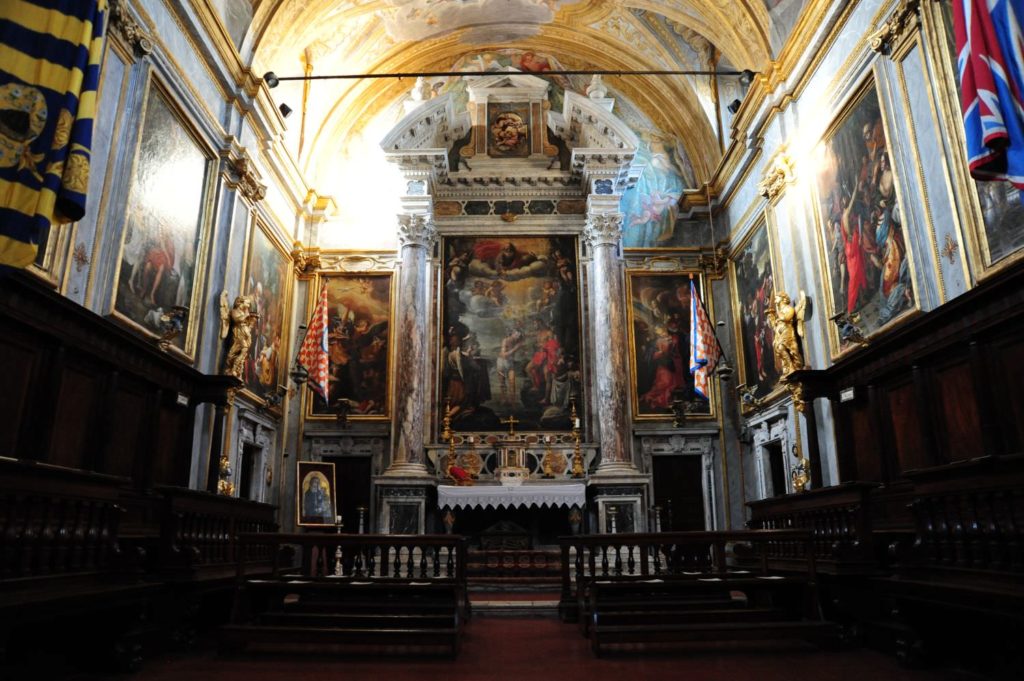 One of the churches, in the Leocorno district, that can be visited during In Contrada.

Every year on July 2 and August 16 thousands of visitors and locals congregate in the streets of Siena to watch the famous Palio horse race and cheer for their favorite neighborhood (contrada).  There is a unique new way to get to know Siena in December and January hanks to an exhibition on the lowest level of the Town Hall (Palazzo Pubblico) lowest level, used as a dressing area for local children who participate as extras in the biannual event.  The premises, a spectacular restoration of the salt deposit area, are filled with beautifully presented costumes from the Palio celebrations and offers the chance to experience the art, history and tradition of its diverse neighborhoods.

Through January 25 this in-depth view will be possible thanks to guided visits that begin in the Cortile del Podestà.  After passing through the displays of the vivid regalia worn by Palio participants, a stroll is organized through the central market square and one of the city’s districts.  The focus of exploration includes museums that are occasionally open for special occasions but not to the general public.

The contrade or neighborhoods are like small states within the city, each having it own administration and an elected council.  Important events, such as marriages, deaths and food and wine festivals are celebrated within the tight-knit communities.  Neighborhood loyalties are so strong that most Sienese are baptized twice, once in church and once again in their contrada fountain.

Each of the 17 wards, named after an animal or symbol of nature, has borders unchanged since they were created in 1729.  Each possesses a museum, a church commemorating its saint, a fountain and a stable for keeping the Palio horses.  Traditionally each contrada had it own occupational specialty.   Residents of Civetta, the owl, were expert shoemakers, Drago, or dragon, were bankers, Nicchio, seashell, excelled at making pottery and inhabitants of Bruco (the caterpillar) worked in the silk trade.

During the 17 days of In Contrada, the history and treasures of every neighborhood can be explored in its streets, museums and churches.  The museum of Lupa the she-wolf contains a photograph of Giuseppe Garibaldi bequeathed to the Palio winner in 1867.  The Torre, or tower neighborhood, encompasses Siena’s Jewish quarter and synagogue and its museum houses an antique jewelry collection.

Aquila, the eagle, located next to the oft-photographed Piazza del Campo, includes the cathedral and its museum possesses a prize exhibit, the oldest surviving Palio banner dated 1719.  In the Church of St. Christopher in the Civetta, or owl quarter, seat of the Council of the Republic of Siena in medieval times, visitors can see the setting where the Sienese declared war on the Florentines in 1260.  Renaissance painters decorated the Baroque Church of St. Sebastian, in the contrada Selva, or forest, with splendid frescoes.

Siena, with its historic center declared a UNESCO World Heritage Site, offers a unique opportunity for visitors to enter the heart of its picturesque neighborhoods during In Contrada.   To better plan a visit, consult the schedule of the daily tours; for more info visit www.magistratodellecontrade.it. (rita kungel/with additional reporting by susan arcamone)