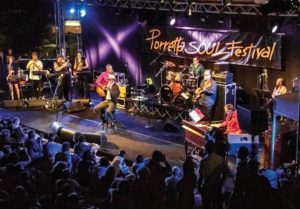 Located between Bologna and Pistoia in the Apennines, Porretta Terme will come alive with the heartfelt, rhythmic tunes of jazz music for the Porretta Soul Festival. The world-renowned event, which will take place from July 20 to 23, celebrates soul music, particularly that of the school of Otis Redding. This summer will mark the 30th year since its debut in 1987.

For 2017, the festival will also be commemorating the 100th anniversary of the birth of American blues singer Rufus Thomas. Performers such as Thomas’s daughters Carla and Vaneese, will be dedicating several numbers to the entertainer, celebrating his contributions to soul music.

The biggest names in jazz and funk from the Deep South in the United States and from around the world will gather to reignite the candle of jazz music, presenting it to the world in its purest and most authentic form. Despite taking place outside of America, the Porretta festival has attracted hundreds of jazz music lovers, and can be likened to a soulful, European spin on California’s Coachella festival, due to its rural mountainous locale and the abundance of talent to be found in its list of performers.

Among the 2017 lineup for the Soul Festival are Bernard “Pretty” Purdie, who was the drummer for Aretha Franklin, King Curtis, Steely Dan, and Dizzy Gillespie, and harmonica player Rob Paparozzi, who performed with the Blues Brothers Band and Blood Sweat and Tears. Davell Crawford, the grandson of James “Sugar Boy” Crawford, will be performing a New Orleans rendition on the piano. Other celebrated performers include Rob Paparazzi, The Original James Brown Band, Sax Gordon & Toni Lynn Washington, and Scott Sharrad.

In addition to these American jazz performers, international youth music groups and jazz ensembles from Spain, the UK, Australia, and Italy will also be performing at the Rufus Thomas Stage. The festival, while delighting the ears of jazz fans, will not fail to appeal to the palates of food lovers: Soul and Street Food Village will offer a variety of international dishes. Finally, the Porretta Soul Museum will be showcasing a special exhibition on the history of the Soul Festival since 1988.