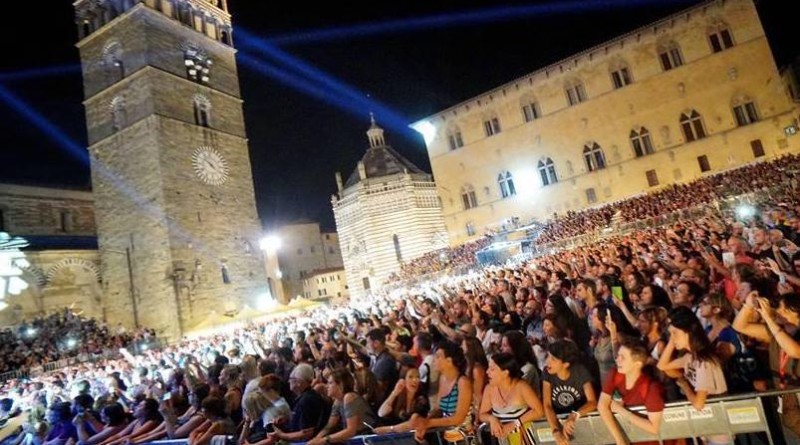 In the 40 years in which Pistoia Blues has been going, it has built itself to be one of the most important festivals to take place in Italy for both Italian and international performers. Easily recognisable names such as Bob Dylan, Pearl Jam, BB King and David Bowie are just some of over 400 artists to have performed on Pistoia’s main stage. Although the festival may be rooted in blues, it has progressed to serve a much wider audience with artists from genre’s such as rock, jazz, and much, much more.

On the main stage with free admission, the festival will commence with “La notte del blues,” with headliners Black Stone Cherry, an American rock band which have recently released their sixth studio album: Family Tree. This group in particular have come strength to strength since reaching fame with their 2008 release Folklore and Superstition, with leading tracks such as “Blind Man” and “Soulcreek.” Although placed in the genre of “rock,” with frontman Chris Robertson’s blues-reminiscent deep-southern baritone, it is easy to see why Black Stone Cherry is set to kick start “the night of blues” in Pistoia. Also sharing the main stage in Piazza Duomo is blues legend Ana Popovic, alternative rock artists Lambstone, and the new project by Florentine musician Filippo Margheri, with special guest Ghigo Renzulli on guitar and Fabrizio Simoncioni on keyboards.

Since 1993, Pistoia Blues has held “Objective BluesIn,” the national contest for the younger generation of artists through which, every year, emerging musicians are selected to play on the Pistoia Blues main stage. On this day, also with free entry, spectators will also have the opportunity to witness the grand finale of the 27th edition of this contest on the stage in Piazza Gavinana. The eight bands which progress from the semifinals will go on perform live in this finale to win the chance to share the main stage on the evening of July 7 with blues legend Robben Ford. All information relating to the ongoing contest is available in real time on the official website site of the Pistoia Blues.

The following day, July 6, ticket holders will witness interstellar and world-famous artists Thirty Seconds to Mars on the main stage in Piazza Duomo. The was band formed in 1998 in Los Angeles by musician, actor, and producer Jared Leto, along with his brother Shannon Leto. Together they reached critical acclaim with their second studio album A Beautiful Lie, featuring stadium anthems ‘The Kill,’ which set a record for the longest-running hit in the history of the US Modern Rock chart when it remained on the national chart for more than 50 weeks, and ‘From Yesterday,’ the music video of which was directed by Jared Leto himself, and was a short film which was the first ever American music video shot in the People’s Republic of China; the song also became the band’s first number one on the Billboard’s Modern Rock Tracks.

On July 7, the festival returns to its blues atmosphere with two exceptional American born headliners: Robben Ford and Eric Gales. Ford, who has a history performing with illustrious artists such as Miles Davis, Joni Mitchell, Kiss, and George Harrison, was once named in the list of “100 Greatest Guitarists of the 20th Century” by Musician magazine. The three winners of the aforementioned Objective BluesIn contest will open the evening and kick start what is shaping up to be a guitarist’s paradise.

The next day, July 8, the centre of attention will be English born and former Oasis singer/songwriter Noel Gallagher, who will be performing on stage with the High Flying Birds. Since leaving Oasis, Gallagher went on to feature in a number of different groups, such as the Gorillaz, the Chemical Brothers, and Paul Weller before creating his current project. Noel Gallagher’s High Flying Birds have released a total of three studio albums, each of which carry his signature “Mancunian” sound, and has been awarded countless accolades from GQ, Q Awards, and NME.

To close this mammoth festival is none other than Ben Harper, who will be performing with his band, the Innocent Criminals. Harper himself is widely known for being a multi-instrumentalist, and plays an original, creative amalgamation of genres such as soul, reggae, rock and blues during his performances, as well as creative interpretations of songs by artists such as Bob Marley and Marvin Gaye. Hailing from California, Harper has released a massive 14 studio albums over 24 years, not only with his Innocent Criminals ensemble, but also with big names such as electric blues musician Charlie Musselwhite and the five-time Grammy Award-winning gospel group The Blind Boys of Alabama.

Aside from the main stage in Piazza Duomo, guests are welcomed to visit the other stages dotted around the city, where one can find equally as talented musical artists, international and Italian, blues or otherwise, such as The Cabin Fevers, singer-songwriter Fabio Pocci, and Modena indie group Kaos India. (karl whittaker)