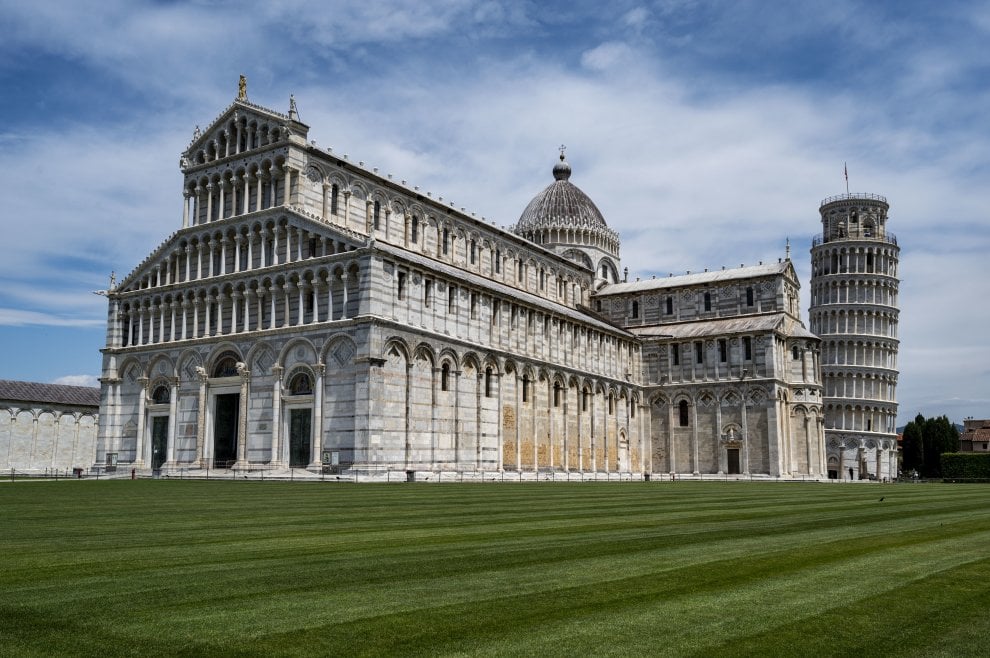 The Cathedral, Baptistery, Camposanto and the Leaning Tower in Pisa’s Piazza dei Miracoli will once again be accessible to the public starting on Saturday, May 30 as part of the post-lockdown phase of the Coronavirus pandemic. Revised hours are 10 am to 5 pm.

All guests must wear a mask, with the exception of children six and under and will be admitted at different intervals in order to adhere to social distancing mandated by current safety protocols.  Only 15 people at a time will be allowed in to visit the Leaning Tower, 150 in the Cathedral (which will be off-limits to tourists during Mass), 100 in both the Baptistery and the Cathedral Museum (Museo dell’Opera del Duomo) as well as 250 in the Camposanto.  Only two windows out of four of the complex’s main ticket office will be open simultaneously.  Admission is currently €18 for visitors to the Leaning Tower; entrance to the Cathedral is free.  As for the Baptistery, Camposanto and Cathedral Museum, to tour one landmark costs €5, while €7 is charged to see two, €8 for three.

The grand Cathedral is a direct reflection of the civic glory, political status and wealth of Pisa at a time when the city was one of four maritime republics of Italy.  The church was begun in 1063 by the architect Buschetto after the Pisans had triumphed over the Moors in a naval battle in the Bay of Palermo, and some have viewed its dedication to the Virgin Mary as an offering of thanks.  The exterior is a splendid assortment of decoration which mirrors the multiple cultural roots of Pisan Romanesque architecture, including Islamic art.  Among the multi-color stone intarsia (inlay) one also finds ancient Roman inscriptions. One of the chief treasures of the exterior is the oldest surviving Tuscan bronze door, decorated with Biblical stories by Bonanno.

Across from the Cathedral rises the massive circular Baptistery; it cornerstone was laid in 1153.  The lower part is in the Romanesque style, the upper, completed later, is clearly Gothic.  The curiously shaped crowning dome is formed of a giant vertical cone that intersects a sphere.

Begun in 1173 under the direction of Bonanno, the Tower began to sink in 1185 just as its third level was being built.  Construction was interrupted for a century, partly because of Pisa’s political troubles.  In 1275, Giovanni di Simone resumed work on the Tower, and raised it to six levels.  The final result is a rare aesthetic and architectural achievement that stands almost 55 meters (180 feet high) and is characterized by a harmonious blend of loggias and Pisan Romanesque arches.  The ground on which it stands, however, has always been spongy and unstable.  Once below sea level, it still contains a stratum of water.

North of Piazza dei Miracoli and the Cathedral, Baptistery and Bell Tower, Pisa’s Monumental Cemetery (known as the “Camposanto” or “Holy Field”) was begun in 1278 by the architect Giovanni di Simone, and built over sacred earth brought from the Hill of Golgotha in Jerusalem during the crusades. Over the centuries it became the center of an outstanding collection of sculpture and paintings, including several famous fresco cycles by some of the greatest masters of 14th and 15th century Italian art.

The earliest mural, the Crucifixion, was painted by Francesco Traini on the south wall in 1360, while other walls were frescoed with murals by Buonamico Buffalmacco, Benozzo Gozzoli, Andrea Bonaiuti, Antonio Veneziano, Spinello Aretino, Taddeo Gaddi and Piero di Puccio. An array of classical statuary and sarcophagi adorned both the cloister and the interior rooms.

The marvelous frescoes depict scenes from Dante’s Divine Comedy and local saints. Throughout the centuries, these works have faced damage from an accidental bombing and humid atmospheric conditions. During WWII, the Camposanto caught fire from shrapnel of an Allied bomb raid, destroying the roof.  Restoration was only completed in 2018.  (rosanna cirigliano/additional reporting by helen manner & liz wicks)