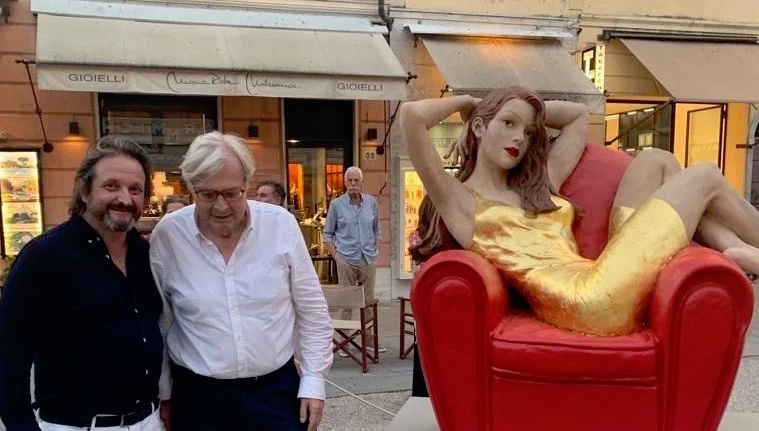 Around 40 contemporary sculptures occupy the historic center of Pietrasanta for “Wonder of Love,” the town’s main exhibition event of the summer.

Located right off the Tuscan coast in the heart of Versilia, Pietrasanta is a medieval town with a rich culture and art scene. The exhibition will be up until Sept. 18 for the 34th year of Pietrasanta’s leading artistic event.

The artist, Marco Cornini, uses terracotta and bronze to sculpt elegant creations that epitomize the sense of astonishment brought by love and all its facets.

The last of the sculptures were entirely made within the last year and a half that Cornini lived in Pietrasanta and attended its workshops and foundries. Also known as “Little Athens,” the city’s history has been closely linked to art for centuries. In fact, Michelangelo stayed in Pietrasanta with his students to use the white marble from nearby quarries.

The town itself is essentially an open-air museum, with world-famous sculptures adorning every street, square and alley.

Five monumental sculptures are placed in the Piazza Duomo and Piazza Carducci for the exhibit, all of which evoke Cornini’s particular attention to the human being existing among the existential aspects of modern life and love.

The first, a bronze sculpture titled “L’abbraccio,” which means the embrace, depicts a passionate display of affection in which a female figure wraps around the neck of her beloved and is lifted in the air as though they are dancing.

“Con quella sua camminata sicura” is another bronze sculpture meaning “with that safe walk of hers.” Standing over 8 feet tall, the artist portrays a young girl walking confidently, with no fear or doubt in facing the life ahead of her.

Two young people are featured sitting on a flowery hill in a terracotta work called “La meraviglia,” or “the wonder.” They are displayed as though they are in an unreachable bubble, floating in a marvel of love.

One of the most representative subjects of Cornini’s work, “Quante cose mi dicevi mentre ti guardavo,” or “How many things did you say to me while I was looking at you,” is a bronze sculpture of a young woman sensually abandoned on an armchair.

Using polychrome terracotta, the artist depicts “Sguardi Oltre,” or “look beyond,” in which a young woman touches her belly, desiring motherhood.

In the Church and the Cloister of Sant’Agostino, an additional selection of works are exhibited that portray the Cornini’s creative path. He was born in Milan in 1966 and graduated in sculpture at the Brera Academy of Fine Arts in Milan in 1988. His first solo exhibition was held in Milan at the Ada Zunino Gallery, when he was twenty-two years old. He currently lives and works in Milan.

One of the most recognized figurative sculptors of his generation, Cornini has exhibited in numerous solo shows in private galleries and prestigious public spaces and his works have been included in many national and international group expos.

The “Wonder of Love” exhibition is promoted by the Municipality of Pietrasanta in collaboration with the Quattro Coronati Association and produced by the Liquid Art System Gallery of Franco Senesi, and curated by Angelo Crespi. (natasha sokoloff)