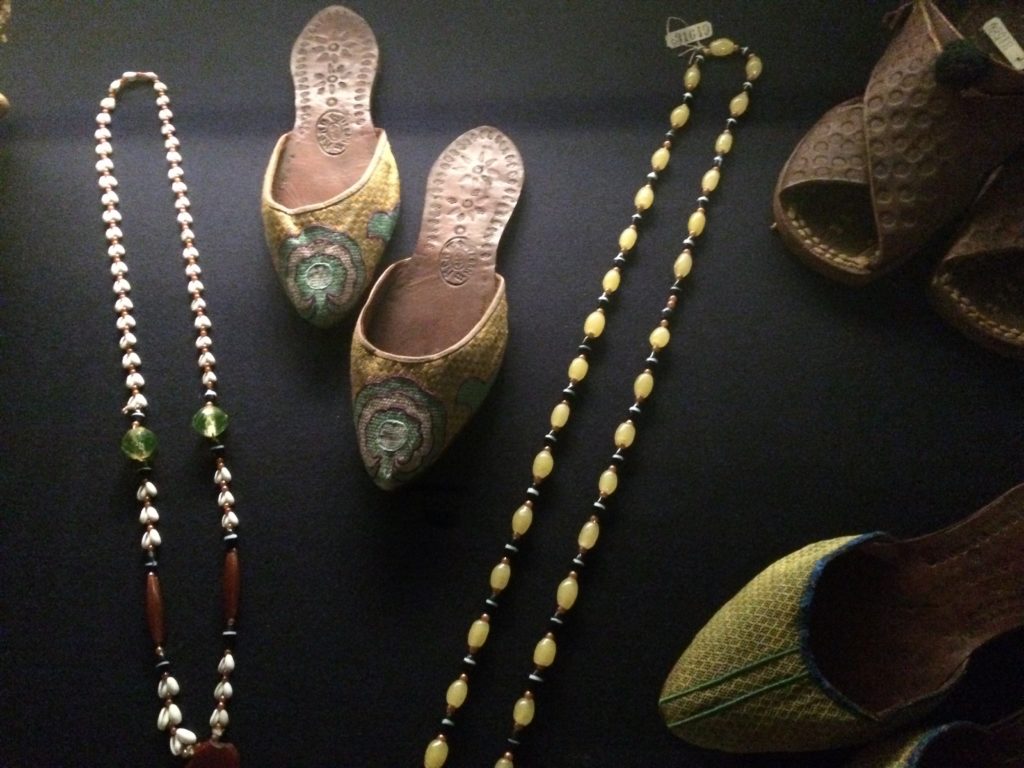 Until January 23:  TURANDOT AND PUCCINI, CHINI AND CARAMBA. Textile Museum (Museo del Tessuto), Via Puccetti 3, Prato.  Open Tuesday – Thursday 10 am – 3 pm; Friday & Saturday 10 am – 7 pm; Sunday 3  – 7 pm.  Admission: €10, students €4.  A combined discount on an admission ticket with the Fondazione Puccini in Lucca and the Museum of Anthropology and Ethnology in Florence is available and encouraged.

Opera lovers rejoice! Prato’s Textile Museum (Museo del Tessuto) is debuting an exhibition centered around the opera Turnadot written by Giacomo Puccini of Tuscany in 1924. Museum-goers will be able to admire various items on display including textiles, jewelry, musical instruments, and weapons, just to name a few. The show is spread across two floors and starts in the museum’s textile room, showcasing approximately 120 items on loan from the Chini Collection, courtesy of the Museum of Anthropology and Ethnology in Florence. The collection draws inspiration from Eastern cultures, including Chinese and Thai artifacts. The second floor showcases Turnadot’s set designs and illuminate the influence Siam (modern day Thailand) had on Chini’s artistic style. In addition, perhaps the most incredible part of the show is in the final room, where the final five set designs from the opera are on display, on loan from the Ricordi Historical Archive in Milan and two private collectors. The third and final room contains the elaborate costumes worn by Iva Pacetti, the opera’s leading lady, including the original wig and hairpin. Finally, the exhibition contains a multimedia exhibition dedicated to Pacetti.

Thirty additional costumes are on display from the Sartoria Devalle archive in Turin worn by both leading and supporting characters. In addition, the exhibition also shows original costume designs by Brunelleschi, Puccini’s original artist, the original premier poster, Casa Ricordi’s original voice and piano arrangement and an illustration of Turnadot done by Leopoldo Metlicovitz.

The show was inspired by Iva Pacetti’s private wardrobe, thought to have been lost during the 20th century. Meticulous research has been done to create this collection, including extensive jewelry and costume restoration done by the Consorzio Tela di Penelope in Prato and private jewelers in Florence. It started in 2018, when the Museo del Tessuto received word about a mysterious trunk rumored to contain the original clothing worn by Pacetti during her years as the protagonist of Puccini’s Turnadot. The show is centered around the inspiration and relationships leading up to the creation of these costumes with a focus on the partnership between Puccini and his friend Galileo Chini, along with Caramba, the costume designer of the Teatro alla Scala, where the opera premiered. Puccini trusted Chini to depict the opera with a reliable Eastern atmosphere due to his time spent in Siam for three years that would later inspire the set designs for Turnadot.  (stephanie klein)