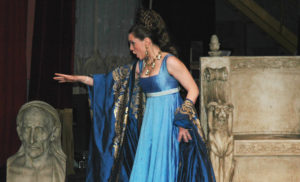 Opera Barga is celebrating its 50th anniversary with an inaugural concert, and not an opera for the first time in its history, due to financial restraints. Despite this major change, the festival (July 27 – August 6) will stage a series of notable events showcasing baroque and contemporary composers interpreted by local and European guest artists at historical locations throughout the village of Barga.

On July 27, the main church, the Duomo, which overlooks Barga and is Romanesque in style, will host the Orchestra Accademia degli Invaghiti under the baton of Federico Maria Sardelli (9:30 pm). The program comprises Il Magnificat RV 661 in G minor by Vivaldi, Ave Maria and Pater Noster in D major Op. 233 by Privitera, and Gloria RV 589 in D major for chorus and orchestra by Vivaldi.

Earlier, at 7:30 pm, the Ensemble Le Musiche, featuring soloist Simone Bernardini, will play pieces including Mozart’s Concerto for violin and orchestra No. 3 in G major K26 in the Chiostro S. Elisabetta at 7:30 pm. Between the violin concerto and the opening concert in the Duomo, festival organizers will offer drinks to celebrate the 50th anniversary.

On July 29 (with soloist Bettina Hoffmann on the viol) and August 6, the festival will host two concerts of 16th and 17th century music in Casa Cordati, a home of the same period located on Via di Mezzo, at 7 pm.

“PianoBarga” will be held at the Teatro dei Differenti, a small 18th century baroque theatre in Barga, at 9 pm each night. This Schubert piano series, which runs from July 31 to August 6, also includes composers from Monteverdi and Bach to Chopin and Debussy. Two outstanding concerts are Jan Latham-Koenig’s interpretation of works by Leos Janacek on August 1 and a performance of Schubert’s last compositions, “Fortissimo nel mio cuore,” by Simone Soldati (August 6).

President Nick Hunt, a trained actor and director, and Massimo Fino, oversee Opera Barga, which was created by Nick’s parents, Peter Hunt and set designer Gillian Armitage.  Looking for a way to contribute to the scene of young artists, singers, and musicians in Italy, the English couple found a home for much of the festival at the Teatro dei Differenti, a red marble, 250-seat horseshoe-shaped venue.

Hunt took over as President of Opera Barga in 1995 after the death of his mother. For the 50th anniversary, the festival has a special exhibition dedicated to the work of Gillian Armitage in a number of venues throughout the village.

Originally, the festival was dedicated to presenting little-known operas. Together with Federico Maria Sardelli, one of the top Vivaldi specialists, the festival put on five Vivaldi operas in eight years and another one in 2011. According to Hunt, half of these operas had never been performed in modern times.

In 2014, the festival completed the first ever recording of early baroque composer Francesco Gasparini’s opera “Il Tamerlano.” “We tend to specialize in reviving operas as well as compositions that have never been performed before or have been forgotten, especially in the baroque period,” Hunt said. “[This period] is really fruitful, because once Italian opera hit the 19th century, it forgot its baroque heritage — which in fact is played much more in other countries than here.”

Opera Barga also features contemporary music; for the last few years (though this project will not take place for the 50th edition), the festival invited 10 composers to each write a 10-minute piece for the chamber quartet, which was then rehearsed and played.

Opera Barga, which relies primarily on donations and state funding, lost much of its financial support in 2015.

According to Hunt, this cut was caused by a new set of rules introduced to the state to allocate funds. The festival is appealing the decision to the administrative court in Rome, along with 120 other organizations in a similar situation.

“It was a great shock of course, to find out that after 49 years of our production we were no longer considered worthy,” Hunt said. “The reason why we couldn’t get the funding was because our artistic merit score was very poor, which was actually from the same commission that had previously given us more money because our merit was so high.”

The festival is still recovering from cutbacks affecting last year’s edition and administrators are unsure if they will have regional funding for the future. Because of the lower budget, artists were asked if they would participate in this year for less pay and for some time, Hunt said, they were worried if the festival would still be possible.

Luckily, the musicians (who come from across Europe and receive free accommodations) returned despite the tighter financial situation to once again be a part of Opera Barga. “The fact that there’s a festival at all is quite an achievement given the circumstances and we’re very happy that we’ve managed our 50th anniversary celebration,” Hunt said.

“Some evenings are magical because the concert is in a particular venue and a special mood is created. There is always an element of surprise: is impossible to know what is going to be the real highlight of the festival.”  For the complete program, visit www.operabaga.it.  (francesca billington)