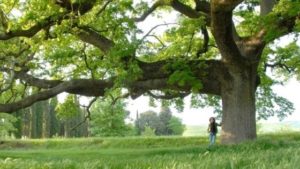 In Val D’Orcia an immense oak tree, 370 years old, stands gracefully over the fields of grass. Sadly, on August 15, 2014, this innocent tree suffered an act of unintentional vandalism. A group of people climbed up and the pressure of their combined weight forced a large branch to snap.

The community was deeply affected by the injury of the tree, and its protection became a priority. Now, after three years, the Minister of Cultural Heritage has recognized the Oak delle Checche as a living landmark in order to preserve and safeguard it.  The tree is considered to be a “green monument,” a first, to challenge convention by recognizing a living object as opposed to an inanimate, human creation.

The mobilization for this cause arose from a Facebook group called “SOS Quercia della Checche.” The fervent group continues to feel passionately about the cause, and volunteers take care of the new monument.

The group has received criticism from those who think that there are more pertinent issues than the health and wellbeing of a tree. However, a group’s spokesman, Nicoletta Innocenti, refutes this, explaining that if one always thinks there is something more important than the issue they are presented with, no problems would get solved.

The  of this monument is a success for the community and for the protection of nature in the future.