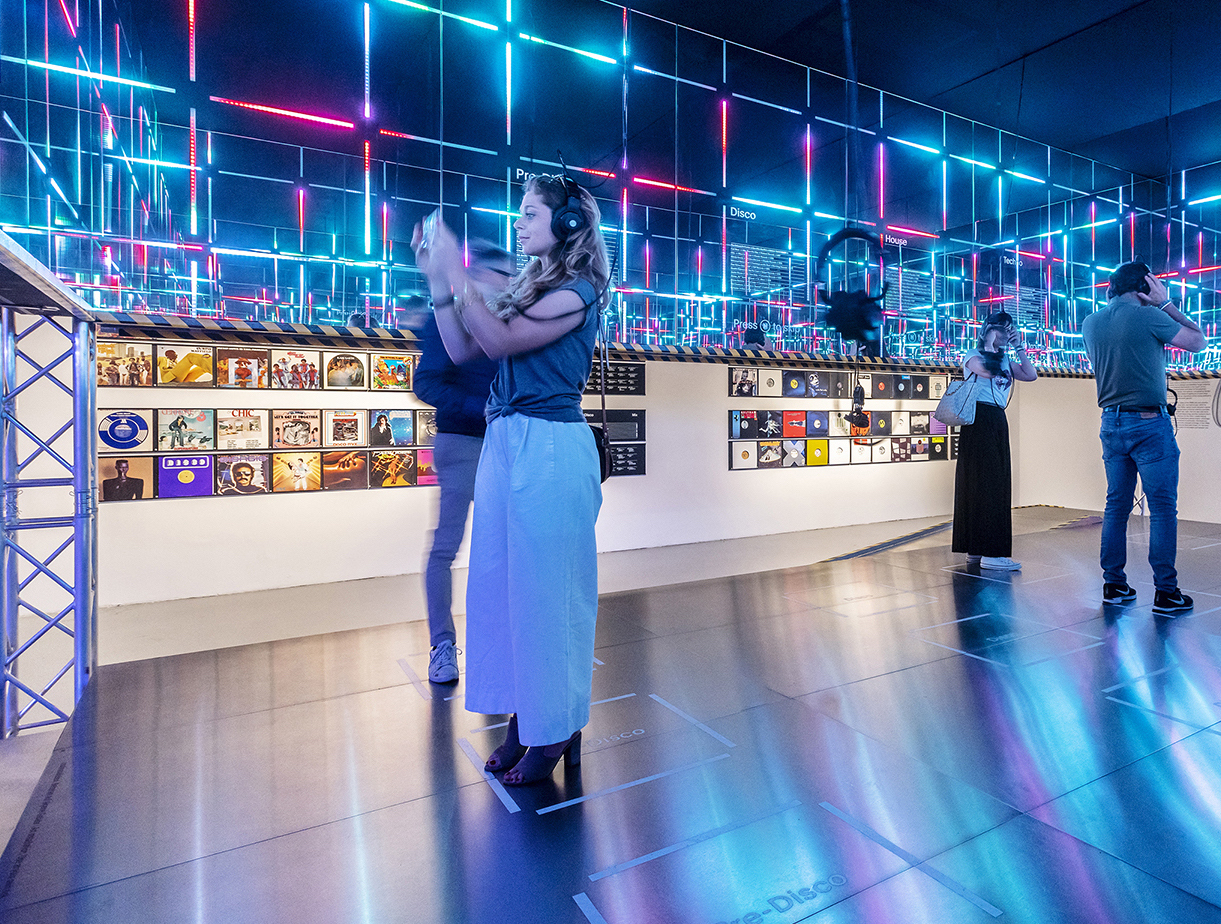 An exhibit at the Pecci’s ‘Night Fever’ show

Travel through decades of discotheques at Night Fever. Designing Club Culture 1960 – Today, curated by the Vitra Design Museum and ADAM – Brussels Design Museum, that has come to Prato’s Luigi Pecci Contemporary Art Centre as the only location in Italy to host the collection. The exhibition explores how architecture, design, graphics, music, fashion, dance and staging come together in these spaces of concentrated individual and collective expression that in turn take on important cultural, even political significance.

Nightclubs came to represent gathering places of the avant-garde, havens in which experimentation and counter-culture were permitted, protected and encouraged. The collection acknowledges discotheques as the artist’s playground, a window into cultural movements rarely deemed worth examining by museums. As such, the exhibition treads unchartered waters with this unique collection of films, vintage photographs, posters, clothing, artwork, furniture, floor plans, magazine clippings and light and sound installations.

Stepping through a narrow metal corridor, following the direction of the neon red arrow above it, the viewer enters the first room that presents the decade of leisure and consumer society in which nightclubs started to boom, the swinging 60s. The spotlight is on Italian discotheques, where architects and designers began to recognise the nightclub as a new spatial and building typology that thrived off of innovation.

Images and furnishings from Italy’s first discotheque that opened in Rome in 1965, Piper, show the emergence of this experimental approach to design. Studio Capolei Cavalli Architetti transformed the vast space with monochrome platforms at varied heights and colourful tables and chairs that could all be rearranged according to the evening’s events. This flexible and democratic design choice skyrocketed the venue to such success that Piper opened a second club in Turin in 1966, and the owners then opened another in Rimini the following year.

An array of magazine clippings from Casabella, Domus, Time and Life magazines demonstrate the growing fascination with the architecture and design of these spaces that allowed creativity to run wild, the more unusual the better. Striking images of Italian club Flash Back in Borgo San Dalmazzo, described as ‘A New Temple Dedicated to Disco-Music’, show the playful exterior design of futuristic domal and pyramidal geometric shapes as well as the cavernous interior, a maze of stairs, columns and colour. Just as other-wordly is Studio65’s Barbarella nightclub in Dubbione di Pinasca, a town outside of Turin, included in an issue of Domus from 1973. Studio65 rejected the conventions of mainstream design and poured this subversive energy into the spaceship-themed sidereal disco, named after the science fiction comic-turned-film Barbarella.

As the exhibition moves into the 70s, the visitor discovers other destinations that began to adopt this radical architecture that followed ambitious visions. The astonishing concept behind Munich’s Yellow Submarine designed by architect Justus Dahinden sought to create a round-the-clock leisure city known as Schwabylon within the city of Munich, in the neighbourhood of Schwabing. The gargantuan complex of Schwabylon was built in 1973 and contained 700 apartments, a marketplace, beer garden, indoor pool, ice rink, amusement arcade and of course the disco, Yellow Submarine. The images and floorplans illustrate the project in detail, avant-garde in concept as well as its design; the building was a three-storey steel capsule surrounded by a 600,000 litre saltwater pool full of sharks that clubbers could observe through the discotheque’s portholes.

Club culture gained new momentum in the 70s as discotheques grew to be more than just a weekend activity, but a lifestyle. Disco music and dance became its own genre, peaking with the release of Saturday Night Fever with John Travolta in 1977, selected scenes of which are projected on a large screen. An impressive light and sound silent disco installation shows the evolution of music played in nightclubs. A dozen headphones hang from the ceiling, inviting visitors to step onto the raised platform beneath the flashing disco lights and listen to the selected songs from each decade the exhibition explores.

Though disco became heavily commercialised and mainstream, it was originally born in clubs frequented by those marginalised by the white and heterosexual majority. The exhibition touches on the importance of nightclubs and their spirit of accepting that which is different and daring. In times of racial discrimination and homophobia, many discotheques such as Paradise Garage and The Saint represented safe spaces for those unable to live freely day-to-day, as shown by an array of paraphernalia that promote the clubs themselves but that more importantly promote freedom of self-expression.

The dance floor emerged as a stage for individual and collective performance, a place to see and be seen. No club illustrates this better than New York’s infamous Studio 54, the watering hole of countless celebrities, artists and designers who appear in a series of photographs in the exhibition. The appeal of exclusivity and secrecy shrouds Studio 54, as is evidenced by a luxe gold invite, membership cards and humorous poster for Studio 54 jeans with the logo ‘Now everybody can get into Studio 54’ that are showcased.

As the 80s rolled around, the arts and nightlife merged in unprecedented ways as clubs became new spaces of exhibition outside of the conventional settings of museums, galleries and runways. Area club in New York embraced this to extremes, completely transforming the 1,200-square-metre space every six weeks according to a new theme. The refurbishment would take roughly 4 days and cost around $300,000. The curators had sourced a variety of the extravagant invites launching some of these themes, such as an egg on a cushion of straw inside a cardboard box with the words ‘BREAK OPEN EGG’ printed on the lid. Inside the egg is the invitation to the opening night of the Natural History theme at Area.Another was a water-soluble pill that revealed the invite once disolved, a playful comment on the the trend of psychedelic drug use in nightclubs. Area was simultaneously installation art in itself and a stage for performance art, welcoming artists such as Keith Haring who painted a graffiti-style mural inside the club and Andy Warhol who presented his ‘Invisible Sculpture’.

Entering the age of House and Techno music, we transition to the 1990s, with particular focus on post-wall Berlin, Europe’s techno stronghold. Staggering comparative photographs of derelict, disused spaces that become nightclubs, such as Tresor (1991) and then later the notorious Berghain (2004), formerly a heating plant, illustrate how a vibrant club scene can flourish in the cracks of the urban fabric.

The final room examines the contradictory state of the clubbing scene in the 21st century. In an age where digital platforms are the the spaces for collective congregation, is the role of the nightclub under threat? Many clubs have been forced to close as prices in inner-cities rise at astonishing rates. And yet, as commercialisation intensifies in the 2000s, certain clubs and DJs become world famous brands, tourist draws that form part of a city’s cultural landscape more than ever before.

The exhibition provides this comprehensive overview of the evolution of nightclubs as architectural spaces as well the changes that have have occurred in the ritual of collective gathering itself. The detailed examination of a wide range of clubs across the globe through a series of sourced artefacts artfully illustrate the journey. The misconception that nightclubs and art do not intersect is completely debunked as we are shown how clubs have acted as the sun, water and soil that have allowed art to blossom. (saskia brown)