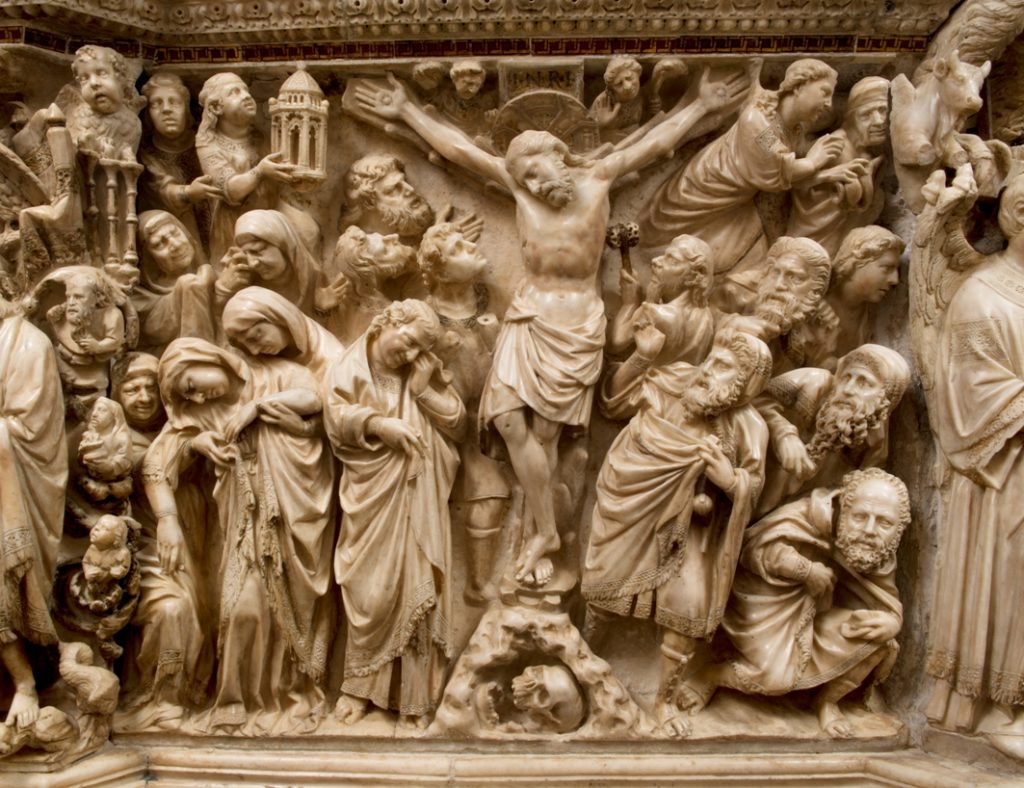 Detail of Pisano’s pulpit depicting Jesus on the Cross.

After two years of analysis and work, Nicola Pisano’s newly-restored Siena Cathedral pulpit was revealed on Friday, June 15. The Department of Earth Sciences at University of Siena and the “Opficio delle Pietre Dure,” Florence’s prestigious restoration center, helped with the conservation. The process, which began in February of 2016, employed interdisciplinary and innovative methods such as chemical analysis, 3D modeling, stratigraphic archeology, ultraviolet photography and videography.

A feat of Gothic sculpture, Nicola Pisano’s Sienese pulpit depicts scenes from the Life of Christ and is assembled of varicolored marble. The structure broke from tradition with its hexagonal form, a shape thought to have been inspired by southern Italian forts. The high-relief carvings give the marble an otherworldly quality. At one point during the presentation, a shard of light shone through the Duomo’s north transept window, illuminating the thin stone behind Christ’s chiseled form on the cross with a lifelike peach glow.

The pulpit is the result of Giovanni Pisano’s first assistantship to his father. Nicola’s proto-Renaissance style combines such diverse influences as Roman sarcophagi reliefs, Christian motifs, mosaics, and French Gothic designs. Free of the patina of centuries of dust and votive candle smoke, the pulpit now stands restored in the striped interior of Siena’s visually striking cathedral.

The video of the restoration depicts various conservationists methodically cleaning the pulpit. Gloved hands move over the high-reliefs with care, swabbing the marble surface to reveal faint colors and gilding. In one clip, a man in a bright orange vest points an ultraviolet ray gun at the pulpit, creating a 3D computer generated image of the surface in the next frame. In another scene, a woman carefully draws a chalky seashell out of the sculpture’s crevice, cupping it in her palm as the camera zooms in. This kind of documentary not only lends transparency in the present, but will be an invaluable resource and model for future scholars and restorers.

A well-preserved contract confirms that the church commissioned Nicola Pisano to design and construct the pulpit on September 29, 1265. With the help of his son Giovanni and his two pupils Arnolfo di Cambio and Lapo, Nicola Pisano began working on the pulpit in the fall of 1265, and completed the masterwork in the fall of 1268. The pulpit was originally placed directly under the cathedral’s dome, and remained in that location until 1506, until it was dismantled. The structure was then reassembled and moved to the north transept in 1543, where it still stands, now newly refurbished.

Gian Franco Indrizzi, the director of Siena’s Art Museums and ancient Churches, stated in an interview with Siena News, that “The pulpit is the crown jewel of the Cathedral because it represents the…prosperity of Siena in that period when our city could afford the best artists, sculptors and painters.” Indeed, as the red drapery dramatically fell from the pulpit’s newly scrubbed stonework, the audience uniformly gasped. The “crown jewel” has been restored not only with integrity and transparency, but to beautiful effect.

The Pisano pulpit is on view in the Siena Cathedral; hours are 10:30 am – 7 pm and the admission price is €3 and €6 if the floor is unmasked. See more information here (isabelle blank)