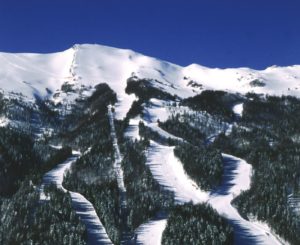 Abetone and Cutigliano, the closest ski area to Florence, is blessed this season with early snow and more on its way. Set in the Tuscan-Emilian Apennines north of Pistoia, the Abetone ski resort boasts 17 lifts; this adds up to about 30 miles of trails, which range from groomed slopes to tree-skiing, moguls and large valley bowls.  All are currently open with a natural powder base, featuring terrain for beginners to advanced skiers. On a clear day, guests will be especially delighted after exiting the Tre Potenze lift and sidestepping about 10 meters up to be rewarded with a vista of the Mediterranean Sea below.

What’s new: the chair lift from Le Regine to Selletta leading to the other valleys for skiers and snowboarders reopened on Christmas Day. According to mayor Diego Petrucci, 1,200 skiers used the service on the first day alone, helping to ease the parking problem in Abetone.

Doganaccia, with slopes ranging from easy to the challenging Direttissima, is now offering skiing from 6 pm to midnight. On January 4, the Val di Luce, located entirely above tree line, has organized an evening torchlight ski event. On January 5, another fiaccolata, a torchlight descent, is scheduled at La Selletta (6:30 pm), culminating in Abetone’s main square with the arrival of the Befana (an old witch-like woman who brings presents) and mulled wine for all.

Much like Santa, la Befana has her own house in Cutigliano, where she will distribute gifts on January 5 starting at 5 pm. On the same evening in nearby Pian degli Ontani, residents will sing “canti della Befana” in traditional costume (9 pm), capped by the arrival of the “stella cometa” (comet), followed by food and refreshments, including hot chestnut crepes (necci).

Kids are also entitled to a €5 ski pass, good for one or two days, in Val di Luce. Appealing to all ages, snowshoeing is trendy; Abetone’s former cross-country ski trail has now been turned over to them. Guides organize daily tours; one itinerary leads to the beautiful scenery of Lago Nero.

The village, with several family-run hotels, contains ski shops, cafés and stores selling local products. Its restaurants serve hearty food with specialties such as homemade pasta with wild mushrooms or blueberries picked in neighboring forests last summer. After an energetic day of skiing or snowboarding try a cup of thick, rich hot chocolate to revive the body and soul.

Abetone may also be reached by bus that departs from piazzale Montelungo near the Fortezza da Basso at 7 am, return 4:15 pm every day through January 7, on weekends until March 18 (return at 5 pm).  (rita kungel/ additional reporting by rosanna cirigliano)