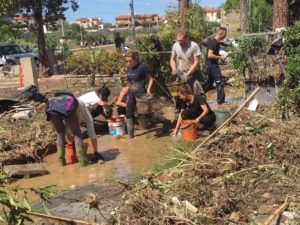 The funerals of the eight victims who lost their lives in Sept. 10 flood that poured into the apartments and homes in Livorno took place in the city’s cathedral presided by Archbishop Simone Giusti, who, according to mayor Filippo Nogarin, made some controversial remarks.

“When the city administration collects bills, someone comes immediately, but where was anyone when they was supposed to warn us that the rivers and streams were about to overflow and a flash flood was about to happen?” said the Archbishop, while tears poured down people’s faces.

“The bishop is responsible for souls, not for matters in which he has no knowledge or expertise,” said the mayor in response.

Volunteers of all ages are continuing to spontaneously arrive in Livorno to dig out the city from mud and debris.  To see a photo gallery, visit Florence’s La Repubblica news site.